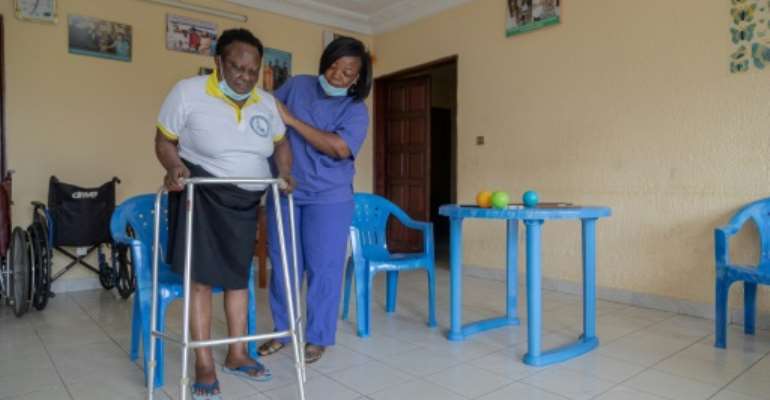 Lydie Ngapet, left, is one of eight people at the care home in Douala. By Daniel Beloumou Olomo (AFP)

"I have given birth to 15 children but I have no one," sobs Marie Ebop Ndjock, 77, her head buried between her arms on the table.

"Fifteen children," she repeats over and over.

But Marie's grief and sense of abandonment are too strong. The tears flow unstemmed.

Marie may have many children but none is taking care of her, and her family is embroiled in a dispute over sharing up her wealth.

To have children, to be old and alone, is a rare but often crushing status in Cameroon.

Here, as in many parts of Africa, looking after elderly relatives is considered a duty.

For many, putting one's parents, uncle or aunt into care is morally unthinkable -- and financially impossible.

"The old people's home is an incongruity in African culture," says Moise Tamekem Ngoutsop, a sociologist at the University of Bamenda in northwestern Cameroon.

"In Cameroon, having an elderly person in the home is considered an opportunity. Knowledge is transmitted orally, from one generation to another."

The care home looks after eight elderly residents -- donations cover the costs for those who cannot afford to stay there. By Daniel Beloumou Olomo (AFP)

But longer lives and a changing urban lifestyle are adding to family burdens, challenging traditional ways about caregiving.

Life expectancy in Cameroon, a country of 25 million people, has jumped by 10 years to 60 in the past two decades, according to the World Bank. The number of Cameroonians aged 65 and over has soared by almost half in that time.

"Africa is a young continent. However, the region and its population are ageing," the UN's Department of Economic and Social Affairs says.

Across the sub-Saharan region, the number of older people will triple to 165 million by 2050, the World Health Organization projects.

The WHO estimates that half of Ghanaians aged between 65 and 75 require some assistance with daily needs -- that is 10 times the proportion in the same age group in Switzerland.

But care facilities for the elderly are extremely rare, reflecting funding challenges in societies where state support is skimpy.

Florence Ndjassep, 35, says she thought of setting up a home for the elderly after working as a nurse. By Daniel Beloumou Olomo (AFP)

The need for the home became evident to its founder and manager, Florence Ndjassep, when she was working as a nurse about a decade ago.

"I was 24 and working in hospitals where elderly people were often abandoned or mistreated," she says.

Patients would ask her to look after their own parents.

Some were "waiting all day for a family member to come and take care of them, to eat, be washed... That's where the idea came from to create a centre for abandoned elderly people," she says.

With the help of benefactors, she set up an association called Love for Cameroon Elderly People (APAC, in French) and four years ago opened the doors of the home.

Adolphe Ndoum, 70, a former employee with the national railway Camrail, moved into the home a year and a half ago after an accident. By Daniel Beloumou Olomo (AFP)

Sixty percent of costs are met by donations, which enables Ndjassep to provide free care to those who have no one to support them.

Ndjassep said the home has met its running costs of around 600,000 CFA francs, and she was disinclined to increase resident numbers, despite receiving on average five requests per month.

Carer: Noura Mfagwen, 23, a worker at the home. By Daniel Beloumou Olomo (AFP)

The inhabitants of the home arrive in dribs and drabs in the dining room for lunch. They have difficulty moving -- some are in wheelchairs, some use walkers. On the menu for lunch: ndole with manioc, Cameroon's national dish.

Caregivers patiently help some to eat, bringing a fork or spoon to their mouths.

Protecting the residents from coronavirus has a been a huge task, says Njassep.

None has fallen ill, although during the height of the lockdown, trips to a restaurant or to a nearby school sports field to watch a game of football were out of the question.