Nigerian political parties and their approach to governance 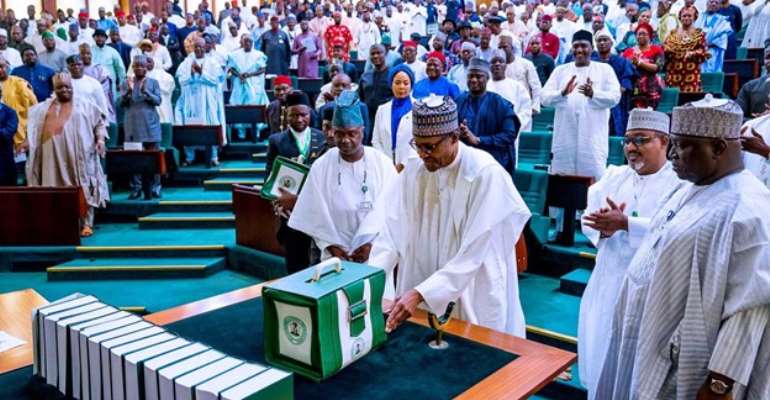 In recent times, there have been several calls by young adult Nigerians for President Buhari to dispassionately disembark from his high horse, pack his bag and baggage, say ‘goodbye’ to Aso Rock and retire possibly to his native Daura in Katsina State. However, those who persistently want to see President Buhari go must understand that there is a price to pay. It is said that every tag has a price. In the first place, there are procedures laid down in the constitution of the country for impeaching or ousting a sitting President, if those who voted him into public office think he should go for whatever reason. But as things appear at the moment, it is very obvious that the National Assembly lacks the political spine or audacity to impeach a president they all see as their big military boss, not as first among equals.

In Nigeria, and as a matter of fact in any other country that claims to practice democratic governance, it would amount to a waste of time organizing people to carry placards and shout through the streets: “The President Must Go!” The President certainly can’t go to anywhere, that way. To start with, that was not the way the President was mandated by the people of Nigeria to manage the affairs of their country. If he was elected by constitutional instruments that bordered on democratic values as indeed he was, he can only be removed by the same instruments the constitution of the country stipulates, no matter how flawed the constitution might be.

If Nigeria was a more advanced democracy like the United Kingdom, it would perhaps be easy to conjure the use of a medium like “Change.Org” to collect about two million signatures as evidence that at least 10% of the country’s population was in support of ousting Mr. President. The organizers would then confront the president’s political party with the signatures to see how they handle it.

In normal circumstances, the party should be able to advise Mr. President to resign and save the face of his beloved party if as many as two million citizens assent to the petition that he had to go, or the party should get prepared to lose the next election. Alternatively, the National Assembly could be presented with the signatures as a backup for the impeachment of the President.

That is the beauty and strength of democracy. Ultimate power must reside with the people, not with the President, not with his subordinates.

Having said that, I must comment that it will be wrong for me to suggest that Nigerian politicians should play dirty politics just to secure the opportunity to get into public offices to right the wrongs of a past government. But it is also important to learn about what could have possibly happened in the more advanced democracies during their times of challenge, both for the sake of exploring that knowledge and avoiding such extremities in trying to get into public office. Otherwise, there is an African adage that there are many ways to catch a rat.

I am not saying that anybody is a rat though. But from deeper political values, we may choose to have a cursory look at what happened to Donald Trump when he became a very unpopular American President. And we may also make bold to ask some very pertinent questions that touch on the very soul of American politics.

For instance, when on 11 September 2001, two Al Qaida-hijacked planes crashed into the North and South towers of the World Trade Center complex in Lower Manhattan, President George Bush was accused by some theorists of being the reason. They said he wanted to curry the sympathy and favour of the world – which would ultimately propel him to his second tenure as President. But a good number of observers believed that the September 11 incidents were a series of coordinated terrorist attacks that killed 2,977 people using four aircraft hijacked by 19 members of Al-Qaeda.

But that notwithstanding, a 2016 study from Chapman University in California found out that more than half of the American people believed that the government concealed vital information about the 11 September attacks. For years, it was mostly believed by a generality of Americans that sections of the official US government report were redacted – a fairly common practice in legal documents which refers to the process of editing a document to conceal or remove confidential information before disclosure or publication – and that some information was still missing. However, that didn't mean there was any evidence for the more indicting online conspiracy theories about the attacks.

Some observers even claimed that the US government of George Bush was complicit - that officials deliberately let the attacks happen or were even involved in the planning. Experts said part of the reason for the persistence of such conspiracy theories was the dissonance or the disconnect that emanates from lack of agreement in trying to understand when people heard that a relatively small group of men using low-technological weapons could cause such magnitude of carnage.

According to Professor Karen Douglas, a social psychologist at the University of Kent, it was perfectly natural when something important happens, people want to have an explanation. Often, the official explanation appears quite mundane and particularly unsatisfactory. So, conspiracy theories often emerge as a result of this need for an explanation that is proportional to the event itself. And when 11 September happened, even people like David Ray Griffin, a Professor of Religious Philosophy and Theology, accused the US government of complicity in the attack in his book “The New Pearl Harbour” which was published in 2004.

Nearly a decade later something else happened in America that took the world by storm. It is now a part of American history that on 25 May 2020, Minneapolis police officers arrested George Floyd , a 46 year–old black man. An employee of a supermarket had called the police and told them that Mr. Floyd bought cigarettes with a counterfeit $20. Seventeen minutes after the police car arrived at the scene, Mr. Floyd was unconscious, pinned beneath three police officers, showing no signs of life. Just seventeen minutes.

The media in America combined videos from bystanders who witnessed the incident, scrutinized security cameras within the environment, reviewed official documents and consulted experts. The media were then able to reconstruct in some detail the minutes leading to Mr. Floyd’s death . The videos showed officers taking a series of actions which violated the policies of the Minneapolis Police Department. Their actions instantly turned fatal, leaving Mr. Floyd unable to breathe, even as he and onlookers called out for assistance.

But what actually happened to Floyd on that unforgettable day? Why was Floyd killed in the broad day light with people videoing the mindless murder which spontaneously went viral? Why was Floyd suffocated to death by a white American police officer at the time he was, at the peak of the last few months of a heavily competed presidential campaign for an election that was held on Tuesday November 3, 2020? Moreover, if Floyd was a white man, could his agonizing death have elucidated the same level of disgust and sympathy as it did with him being black? Was it possible that Trump’s utterances and behaviour were acted out in this way by his opponents planning the brutal killing of a black man in order to sway the American vote by those who had a conscience, or who thought they had a conscience and who would ultimately see Trump’s government as evil?

The day after Mr. Floyd’s death , the Police Department sacked all the four officers involved in the incident. On 29 May, the Hennepin County Attorney, Mike Freeman, announced third-degree murder and second-degree manslaughter charges against Derek Chauvin , the officer seen most clearly in witness videos pinning Mr. Floyd’s neck to the ground with his knee. Mr. Chauvin , who is white, kept his knee on Mr. Floyd’s neck for at least eight minutes and 15 seconds, according to the analysis of available video recordings. The video investigation showed that Mr. Chauvin did not remove his knee even after Mr. Floyd lost consciousness and for a full minute and 20 seconds after paramedics arrived at the scene.

But who actually knew what happened to George Floyd? Why did he have to die the way he did, in the full glare of the world? How did his death highlight Trump’s lackadaisical racial attitude towards black life and the struggling countries of the world he dismissed with a wave of the hand as shithole countries? Why was he murdered when the campaign for the presidential election was at its peak and the election just about 4 months away? How did his death nail Donald Trump’s political suicide? And beyond all that, was it possible that Donald Trump was framed up by those who killed George Floyd so that the world would take sides with Trump’s opponents, seeing him and his government as evil?

No one knows yet.

For those clamouring for Buhari’s ouster, this will certainly sound like conspiracy theory. I know they will defend themselves, saying the country is failing because it has clueless leadership. I would like to disagree with their contention. What I think is that the entire political system–from governors going plate-in-hand for state financial allocation from Abuja to electoral umpires fiddling with votes because of financial inducements from politicians, and from politicians meddling with the judiciary to the presidency behaving above the law–needs to be revamped to move on from politics of power to the modern practice of politics of service delivery, Buhari or no Buhari. The political parties in Nigeria ought to sit down and evolve modern working strategies that can deliver the dividends of democracy to all Nigerians irrespective of religious, tribal and political leanings. It is not all about Buhari as the leader. It is all about Nigeria’s political parties and their approach to governance in the overall interest of their people.

Mr. Asinugo is a London-based journalist and author, and the publisher of Imo State Business Link Magazine (Website: imostateblm.com)