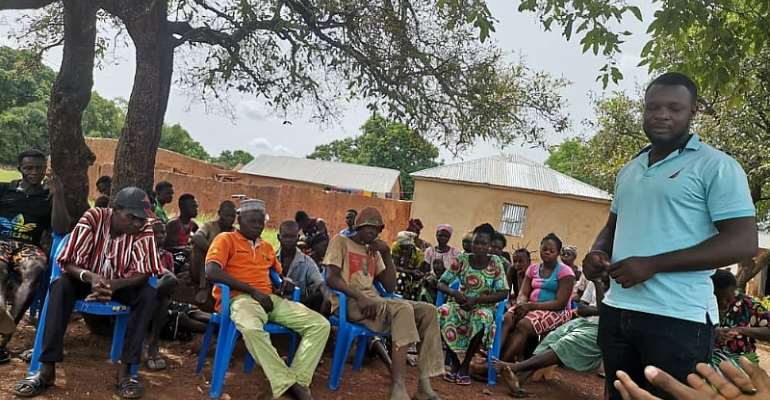 World Environment Day (WED) is celebrated annually on 5 June and is the United Nations ' major means of encouraging awareness by urging all to take positive action for the protection of the environment .

The event which was first held in 1974 is now a platform for raising awareness on matters such as marine pollution, human over population , global warming , sustainable consumption and wildlife crime.

The celebration is a global platform for public outreach, with participation from over 143 countries annually. Each year, the program has provided a theme and forum for businesses, non government organizations , communities, governments and celebrities to advocate environmental causes. This year’s theme was on.

The celebration for this year under the theme "Growing Trees and Greening Cities” was marked in the Upper West Region at Panyan in the Nandom Municipality where various communities within the municipality gathered to mark the day.

The Acting Region Director of the Environmental Protection Agency (EPA) Mr. Emmanuel Lignul called on community members to be watchful of their surroundings.

Mr. Emmanuel Lignul said there is the need for community members to set their own bye-laws on how best they can protect the environment especially when it comes to indiscriminate cutting of trees which has direct effect on the environment.

Touching on issues relating to biodiversity, Mr. Lignul stated that planting more trees will go a long way to sustain human existence as the planting of trees will lead to ecological balance, improved climate and abundance food through sustained flora and fauna deliberately created. There is the need, according to him, to grow trees leading to greening Ghana for sustainable consumption to sustainable development.

He said most of the youth of the area are now heavily engaged in tree cutting for commercial purposes a situation he said could spell disaster for the community and the country at large.

He said owing to this situation, within his jurisdiction they have instituted measures to curb the cutting down of trees. For example he said anybody caught cutting down trees is made to pay a spot fine and the trees seized and given to public schools to be used as firewood.

A forest officer Mr. Nasim N.K. Kadiri working with the Forestry Commission said there are guidelines as to how trees can be cut for whatever purpose. For example he said it is totally illegal to cut down trees within the catchment area of forest reserves.

This he said goes with a sanction if caught engaged in it. He urged community members to ensure that trees that are cut down are replaced by planting trees since it is the only way to sustain the environment.

He added that anybody caught cutting down trees is charged a spot fine of five hundred Ghana cedis(Ghc 500.00) and the wood seized. This he said has kept in check the extent of tree cutting in the area.

The celebration of the World Environment Day in the Upper West Region drew many people from adjoining communities within the Nandom Municipality to Panyan to grace the occasion. In attendance were women of the area who voiced out their concerns about the negative effects of tree cutting within the area.