Russia and Sierra Leone look for ways to boost cooperation 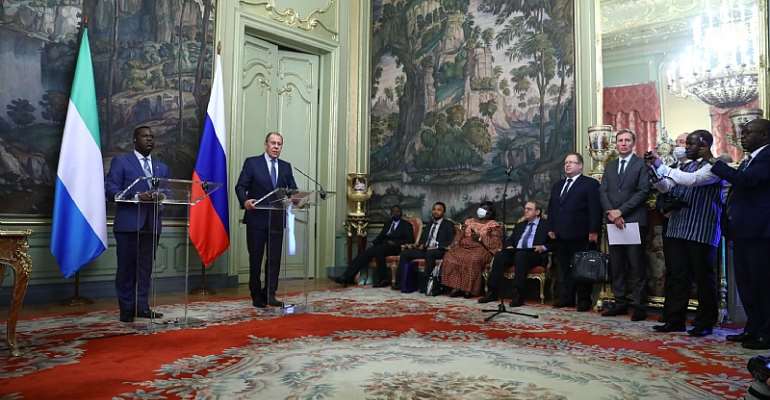 Russian Foreign Minister Sergey Lavrov has held substantive and productive diplomatic talks with, his counterpart, Minister of Foreign Affairs and International Cooperation of the Republic of Sierra Leone David John Francis during his first foreign visit in his new post to Moscow, Russia.

According to official reports, David Francis has visited the Russian Federation, and last participated in the first Russia-Africa summit in October 2019. His mid-May visit was to find ways to expand relations forward between Russia and Sierra Leone, the country that marked its 60th independence on April 27.

Historically, Soviet Union and now Russia has had good relations with Sierra Leone. Diplomatic relations between Russia and Sierra Leone will be 60 years, precisely in January 2022.

While in Moscow, Minister David Francis interacted with Russian businesspeople - those who are already working in Sierra Leone and those who plan to invest in this promising economy. He met with representatives of the academic community and NGOs engaged in relations with Africa.

He had a meeting at the Moscow Chamber of Commerce and Industry and with Sierra Leone students studying at RUDN University. This university established in 1960, the most popular among foreigners, is one of the leading state higher educational institutions. Russia continues to provide assistance in this area of education and training through higher education grants each year.

Russia and Sierra Leone signed an intergovernmental agreement on visa-free travel for diplomatic passport holders. Lavrov and Francis touched upon the possibility of opening a Russian embassy in Freetown, the capital city of Sierra Leone.

Russia and Sierra Leone, both however want to lift trade, economic and investment cooperation to the level of political dialogue. So far, achievements in trade have been modest, or best to describe it as very tiny.

Russia is now eyeing prospects offered by mutually beneficial projects in mining, the fuel and energy complex, infrastructure, and fishing. Sierra Leone has untapped natural resources, especially diamonds. It is among the largest producers of titanium and bauxite, is also a major producer of gold, and has one of the world's largest deposits of rutile.

With this in mind, Minister Lavrov emphasized this point during their joint media conference - “We will continue our discussions to ensure that Russian businesses enjoy a favorable working environment in Sierra Leone. D J Francis reaffirmed that this matter will be on his list of priorities.”

Both Ministers stressed the continuation of the Working Group on Energy, which was created following President of Sierra Leone Julius Maada Bio’s attendance at the Russia-Africa Summit held in Sochi in 2019. The group has already held its first meeting. This year, its second meeting is tentatively planned.

On the general situation in Africa, Lavrov and Francis understandably noted a clear position that there should always be an “African solution to African problems” and that “all external actors must create the best conditions for the African countries, their sub-regional organizations and the African Union to draft common solutions on overcoming crises in the most effective way.”

“We share Sierra Leone’s approach to the current situations in the Sahara-Sahel Region and West Africa, the Horn of Africa and the Central African Republic. As a permanent UN Security Council member and a friend of Africa, Russia will contribute to the strengthening of regional security and stability by supporting, let me emphasize this again, the efforts of the African countries themselves,” reaffirmed Lavrov.

In addition, Lavrov described the measures taken by the Russian Federation to implement the summit’s agreements and create systematic, permanent mechanisms for cooperation through political dialogue and encouraging economic and investment cooperation.

In the end, the parties thoroughly discuss cooperation between Russia and African countries in light of preparations for the second Russia-Africa summit. With high hope and expectation that President of Sierra Leone, Julius Maada Bio, who attended the first summit, will also take part in the second Russia-Africa summit planned to take place in 2022.