Fighting Galamsey: What If The Guns Start To Boom? 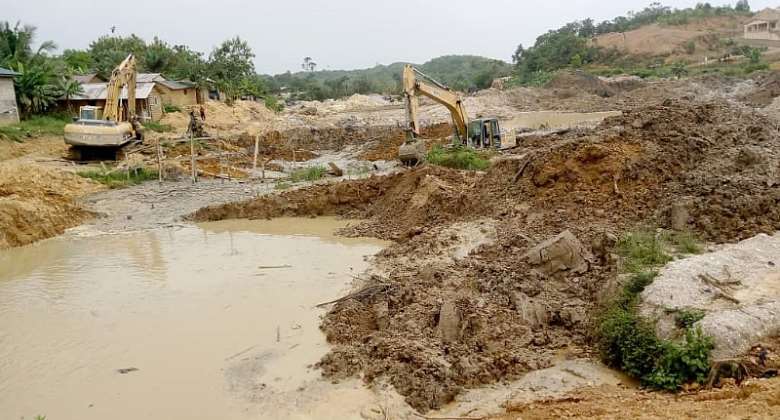 To those who have not been reading this column, they can chose to refer to me as a sadist, satanic, inhuman, irreverent or simply wicked. Any regular reader of this column will understand me when I call for blood to flow at our galamsey sites to save our river bodies and the environment as a whole. We are fighting a holy war for survival and in such type of war everything is fair.

We have suggested all manner of ways and means to impress upon people to stop this irresponsible behavior but everything fell on deaf ears so the only option left is to instruct the Task Force members to shoot galamseyers on site when they are found engaged in this criminal activities. After all, how many are they to take a country of thirty million people to ransom? Since independence no other Head of State has ever told Ghanaians that he was going to put his presidency on the line to curb any menace whatsoever, except President Nana Addo Dankwa Akufo-Addo.

During the last presidential election, many MPs from the galamsey producing areas lost their seats because of the threat to end their operations. They decided to punish the President for daring to stop the menace. But for the well-meaning Ghanaians who saw reason in his threat, Nana Akufo-Addo would have lost the election. This is payback time.

When Kwaku Boahen, the NDC foulmouthed politician moved from one galamsey area to the other, promising them that when they voted for Mr. John Mahama, they would be given free range to operate, the man did not know that he was doing disservice to the good people of Ghana and generations yet unborn.

Now that Ghanaians have voted for Nana Akufo-Addo what is he going to tell them again? And when the guns start to boom with many galamseyers finding themselves in the graves, what will Kwaku Boahen do for their family?

The sages say harsh remedy is recommended for the cure of inveterate diseases. So if killing these criminals like the way we kill arm robbers will solve the problem, so be it. After all, they are used to dying in the pits that they dig for gold so the grave will not be a new abode for them to dwell. I am being so blunt today because scientists have told us that in about ten years time if we are not able to stop galamsey, Ghana will start importing water from neighboring countries. Can you imagine what the ghost of Dr. Kwame Nkrumah will be doing in his grave if that time comes?

I get very angry when people argue that because there are no jobs, the youth are forced to get involve in galamsey. That to me is absurd because the issue of unemployment did not start today but in those days our river bodies were not polluted because of the operations of galamsey. Farming is a lucrative business but because of get-rich quick, the youth prefer to dig for gold which is the easiest way to make money. Extraction of gold in this country did not start with this generation. That is why the country was named Gold Coast.

The problem started with the introduction of surface mining. Some of us foresaw the risk involved in surface mining and wrote extensively against surface mining but we were treated as nation wreckers. Today here we are, face to face with a problem that threatens the very survival of our people.

Even though I am suggesting for the guns to start booming to check the menace, we all seem to be treating the symptoms rather than the causes. The major problems are the gold dealers. The operators of the excavators, the diggers who go into the pits to scoop out the sand, the girls who carry the sand to the extraction areas and the watchmen who look out for intruders are all labourers who receive meager pay after the day's hard work.

The paymasters are the very rich gold dealers who have the funds to buy excavators and other implements for the operations. These people do not even go to the mining sites. They stay in their luxurious mansions and direct affairs from afar. Just take time to ask of the price of one excavator and you will realize that 'money dey talk.'

If a person can get money to buy a whole cocoa farm to extract gold, you can imagine how serious the situation is. The most corrupt persons as far as the issue of galamsey is concerned are the chiefs whose domain the galamseyers operate. By law the chiefs hold the land in trust for the people but because of abject poverty, the people have no say as their chiefs negotiate with gold dealers to sell lands for them to extract gold and pollute their drinking water as well as their environment. The poor farmer has no one to complain to.

Did I hear that some MMDCEs in those mining areas too are involved in galamsey operations? If indeed that is true then the situation is more serious than what the President envisages. How can such government officials be so callous, greedy and criminal? So they are not content with the brand new Nissan Petrol four wheel drive cars, the bungalows, the fat salaries and other pecks that they enjoy like free petrol, per diem, gift of goats and sheep from village chiefs and even food items donated by party people? I think if such criminals are caught and found culpable, they should spend the rest of their lives in Nsawam Maximum Prison. Simplista!

The President must bite the bullet in the fight against these illegal miners who do not care a hoot about the future of generations yet unborn. If he is able to succeed with the help of well-meaning Ghanaians, his name will be written in gold long after he is gone. History is made from such bold ventures and the President is about to make history. The few galamseyers and their paymasters who continue to defy the instructions of the President must pay the high price as stated above. If even heavens must fall for galamsey to stop, so be it. After all, nobody can say we have not served enough notice. Excuse me while I sit back on my lazy chair and puff away my favorite Havana El Passo as usual!!!