How Our Nation Became The "Gold Coast" Without Destroying Itself 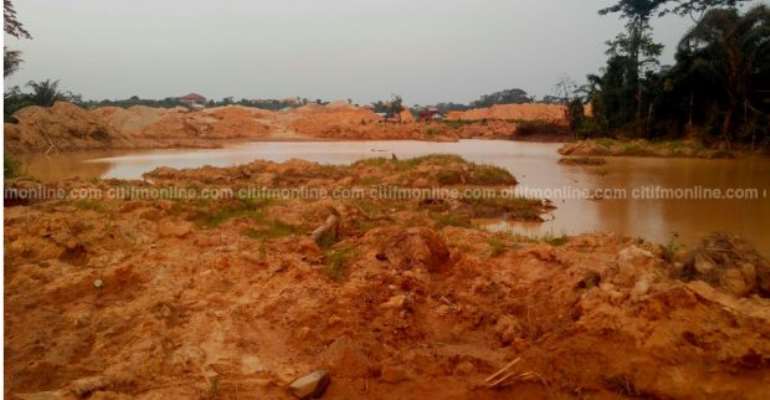 The most dishonest fiction currently being propagated in Ghana, is that “artisanal small-scale mining” is the same as the galamsey that is destroying our rivers, streams, water-bodies, food and cocoa farms, and forest reserves.

Yes, gold mining has been carried out in Ghana since the 15th century and earlier. But it was NEVER DESTRUCTIVE.

A brilliant scholar who has carried out extensive research into the subject is Dr Emmanuel Ofosu Mensah of the History Department of the University of Ghana. In articles in learned publications, he makes it clear that our traditional methods of digging gold did NOT, repeat NOT, injure the land or destroy streams, rivers and water-bodies – as galamsey is doing.

Traditional gold-mining was carried out to conform to the religious beliefs of our people. No mining was done near water-bodies on the “sacred” days allotted to them, or on days designated locally as “dabone” (a festival day like Adae). The ancestors were remembered on such days by pouring libation to them,and sacrificing fowls or sheep. Everyone knew they were keeping an eye on them, and that misdemeanours by citizens would be punished by the ancestors.

QUOTE:...”The miners had to refrain from evil thoughts while digging, the pit lest they lose concentration and injure themselves.

In Adanse, the most important local deity to whom people prayed for special favours and deliverance from misfortune was Bona. As an earth deity, Bona was closely associated not only with the forest, hunting and farming but also, with gold mining. Miners seldom went gold mining without first obtaining Bona’s blessing for the journey.

The people of Adanse traditionally believed that all the gold that lay under the earth and in the rivers was under Bona’s custody and guardianship; hence when villagers went on gold-finding expeditions, they prayed to him for personal safety and good luck on their journey.

“Libation and offerings of chicken eggs, mashed yam or plantain were made to Bona and Asaase Yaa – (Spirit of the Earth) – after a particular find. If a mine became exhausted, it was suspected that a custom had been violated, causing the gold to run away. A traditional priest would instruct the miners to perform sacrifices to bring back the gold.”UNQUOTE

The Adanse people commonly perceived gold as having the capacity to move about t in the earth. In 1868, Dr. Africanus Horton noted that around the Ofin and Pra rivers, it was ...against the fetish of that country that people should dig very deep for gold, as they believed that would lead to its escape.

In Adanse, gold was not allowed to be panned from a river on the days sacred to the spirit of the river. The Adanse people believed that the land they inhabited belonged to their ancestors who bequeathed it to the living, hence at the annual Adae festival, mining activities were suspended. It was believed that the ancestors would punish a miner who flouted

this custom, by causing him to be buried alive by the earth.

The day before the Adae festival is an important one on the Akan calendar. Called Memeneda Dapaa, it is a day of meticulous preparation for the feast by all who have anything to do with the Akwasidae. The death of an Adanse chief was followed by a ban on mining for a prescribed period. Sheep were slaughtered for purificatory and pacification purposes (asubo). The Earth-goddess was promised further sacrifices for the bountiful recovery of gold.

The source and methods of production of gold were kept a closely guarded secret and were not revealed to strangers and foreigners. Ha – the Chinese would have been shown the door the moment they brought their chanfangs along!

The most interesting aspect of the mining was the technical proficiency with which it was carried out. Extreme care was taken not to harm the people of the community or their environment. A European eye-witness called Romer, wrote in 1760 that the Akyem people “dug a slanting pit in the ground, which looked like a staircase, with each step measuring about 3 feet high. Sometimes, a shaft had 50 to 60 steps, and on each step, stood a man who passed up trays full of soil and passed down the empty ones”. .

The depth of the pits varied between 12 feet and 30 feet but occasionally, a pit was found that exceeded 150 feet. Some had steps cut into the sides for entry. Others were entered by means of ropes made of creepers.

Another eye-witness wrote that “A native miner ... rarely makes his shaft more than three feet in diameter (so that the danger of anyone falling into the pit by accident is minimised). Planting one end of his digger into a recess in the shaft, the miner places the other end diagonally against the opposite of the shaft, and supporting himself by it, his foot is placed in another of the recesses. He then lengthens out his body and fixes his back firmly against the side of the shaft. Thus supported, he removes the digger, plants it in another recess below the first, and by repeating the operation, gets to the bottom of the shaft. A tunnel, which cannot be long (as his neighbour’s shaft is only fifteen to twenty feet from him) is next driven.

“Organised on a family basis, panning for alluvial gold …. was primarily the work of women, adolescent girls and young boys. Adult males might also participate ….. Women’s alluvial gold washing could be dictated in some states by strict customs. Thus, in one Wassa sub-state, panning for gold was restricted to Tuesdays, Thursdays and Sundays.”

Yet, despite all these restrictions, which snobbish/racist Europeans no doubt found “primitive or superstitious”, one European writer remarked that “experienced prospectors from Australia and South Africa reiterated that the skill of a West African woman with a brass bowl, far exceeded anything they had seen at Ballarat (Australia) or on the Rand” (in South Africa).

In Wassa and Asante, the most typical intermediate-sized mine was the bell-shaped or bottle-shaped excavation known as nkron, narrow at the top but widening at the lower levels into a dome-shaped mining chamber.. A “soil chisel” was used to dig a vertical shaft through the hard laterite crust until the end of the gold-bearing earth or the shaft hit the water table. Such a shaft might also continue for hundreds of metres twisting and turning, as the miners followed the gold until the source ran out.

The roof of the shaft was supported with timber to prevent it from caving in or collapsing. To safeguard the public, the shaft was made so narrow that miners could only support themselves between its walls when descending through it. As stated above, steps were cut into the sides of the shafts to help miners climb up and down. When it became too difficult to go any deeper, the work in the shaft was abandoned and another was dug, often only a few meters away. To help light up the dark underground, miners developed a special lamp, made of clay and lighted by wicks of cotton cloth, soaked in palm oil. A horizontal tunnel linked the bases of the shafts.

By the 1860s and 1870s, miners in Wassa and Asante were using bamboo poles bound together by ropes and reinforced with cross-timbers – to shore up their vertical shafts. Some gold fields were “honeycombed” by a complex network of shafts connected by short tunnels from 4 to 20 ft in length. Between the main shafts, a series of small openings were used for ventilation. In addition, miners at Wassa built palm-leaf sheds over their mine holes to protect against the rains.

It was through these intelligently-devised techniques that our people were able , through their painstaking labour, to entice the Portuguese (who built “La Mina” [Elmina] castle) the Danes, the Dutch, the Brandenburgers and the British, to come and build forts from which to carry out the lucrative trade in gold with them. In his book, El Dorado in West Africa, [Ohio University Press/James Currey Oxford, 1998]; ISBN 0-85255-769-8 (cl), Raymond E Dummett said:

More recent figures of exports of gold from Ghana exist, of course, but this article is about indigenous methods of gold production, not gold produced from mechanised mines. What is indisputable is that our people, using their native ingenuity, produced so much gold that the Europeans with whom they traded gratuitously gave this country the name, “Gold Coast”.

Yet, unlike the fools in our midst who leave a crater-ridden “moon-type landscape” wherever they engage in galamsey today, our ancestors left us healthy, potable water sources. Anyone who saw such rivers as the Ankrobra, Tano, Ofin, Birem, Oti, Densu and others only twenty years ago, would faint if ordered to drink water from them today. For if they drank from these rivers, mercury and cyanide, among other chemicals employed to “pan for gold” in their waters, would kill them.

Indeed, our generation is the only one which is so stupid that out of greed, it actually goes out of its way to import foreigners with no feeling for our ancestral lands, to come and kill our water-bodies with excavators and chanfangs and carry our gold away as booty, in return for undermining our people's future survival as a nation. They bring us such “skills” as doing away with “primitive methods of small-scale gold mining” and teach us how to use excavators to scoop up sand and pebbles from our riverbeds and wash it with mercury and cyanide in the rivers, where chanfangs are parked for days to do the dirty job.

And they threaten to harm our Operation Vanguard personnel who try to stop them, as well as concerned local citizens, with pump-action shotguns and AK-47s. Many Chinese have been caught armed with these guns plus ammunition. But if they are taken to court, (and that's a big IF!) they are not charged with unlawful possession of firearms. The worst charge they usually face is the flouting of immigration laws – which the courts duly punish with a mere slap on the wrists.

Alas! Ghana, is this you, after 64 years of nationhood?