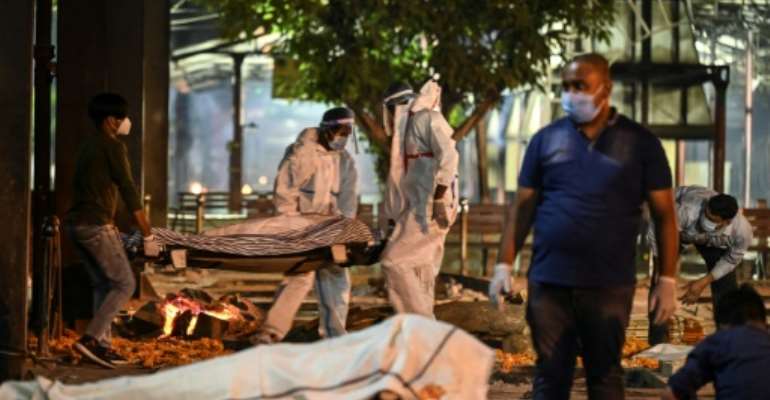 India's health ministry data showed nearly 315,000 new infections in the past 24 hours -- the most of any country since the pandemic began. By Sajjad HUSSAIN (AFP/File)

India posted a record rise in new coronavirus cases on Thursday, in an alarming surge being blamed on a "double mutant" variant and super-spreader events, even as countries in Europe prepare to ease some of their restrictions and express tentative hopes that the peak may have passed.

Indian health ministry data showed nearly 315,000 new infections in the past 24 hours -- the most any country has recorded in a day since the pandemic began -- as hospitals sent out desperate warnings that patients could die without fresh oxygen supplies.

A key question is whether a new variant with potentially worrying mutations -- B.1.617 -- is behind what is currently the world's fastest-growing outbreak, or whether it is being driven by human behaviour, like "super-spreader" events such as huge religious festivals and political rallies with mostly maskless crowds.

The B.1.617 variant has already appeared elsewhere, including in the United States, Australia, Israel and Singapore, and on Thursday evening Belgium authorities confirmed it had been also been detected there in a group of Indian nursing students who arrived earlier this month from Paris.

Concern about it has led some countries, including the UK, to slap travel restrictions on India. 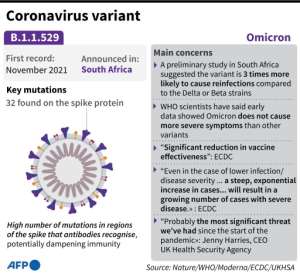 Factfile on the B.1.617 variant of SARS-CoV2 now circulating widely in India. By John SAEKI (AFP)

The United Arab Emirates became the latest to join the list, announcing Thursday that it would suspend all flights from India.

The air corridor between the UAE and India is one of the busiest in the world, with some 300 flights a week were operating between the two countries prior to the ban, according to local media.

With the global death toll now standing at over three million, Europe has also recently been hammered by a ferocious surge in new infections.

Nevertheless, cautious hopes are being voiced that the worst of the region's third wave could now have passed.

In France, which is currently under its third coronavirus lockdown with most non-essential shops closed, Prime Minister Jean Castex said there had been a "genuine fall in the circulation of the virus over the last 10 days".

He announced that from May 3 France will drop restrictions confining people to a 10-kilometre (six-mile) radius of their homes and that cafes, restaurants and cultural venues -- closed since October -- could begin to reopen "around mid-May", depending on the evolution of the health situation.

Vaccination programmes that started very sluggishly in many European countries are beginning to pick up speed.

Germany, for example, is expecting to open up Covid-19 vaccinations to all adults in June at the latest, Health Minister Jens Spahn said. 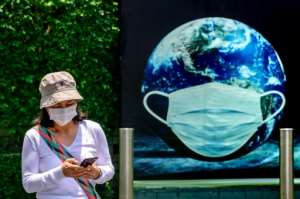 Europe's biggest economy is also in talks with Russia to buy 30 million doses of the Sputnik V coronavirus vaccine, according to Saxony state premier Michael Kretschmer, who discussed the issue with President Vladimir Putin on Thursday.

"Germany is negotiating 3 x 10 million doses for June, July, August. The prerequisite for this is the swift EMA approval of the vaccine," Kretschmer wrote on Twitter.

Some 21.6 percent of the German population had received a first dose by Thursday, according to official data. 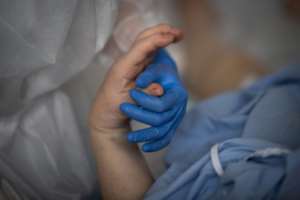 France is currently under its third lockdown to stem the coronavirus, with most non-essential shops closed. By LOIC VENANCE (AFP)

In Egypt, drug maker Minapharm announced it will produce 40 million doses of Sputnik V in the first such production partnership in the Middle East and North Africa.

At the same time, the troubles plaguing another vaccine, AstraZeneca's, show no sign of abating, with the European Commission seeking to launch legal action against the Anglo-Swedish drugmaker for under-delivering doses to the EU, hobbling the bloc's early rollout of jabs.

Even Mount Everest has not been spared from the pandemic.

A Norwegian climber confirmed Thursday that he has tested positive for Covid-19, in a blow to Nepal's hopes for a bumper mountaineering season on the world's highest peak.

The pandemic wiped out last year's season but Nepal has eased quarantine rules in an effort to attract more climbers despite the difficulties of treating them if they contract the virus.

"My diagnosis is Covid-19," Erlend Ness told AFP in a Facebook message. "I'm doing ok now... The hospital is taking care (of me)."

Ness was evacuated from the slopes by helicopter and taken to a hospital in the Nepali capital Kathmandu after spending time at Everest base camp.