By Nicolas Florquin - The Conversation 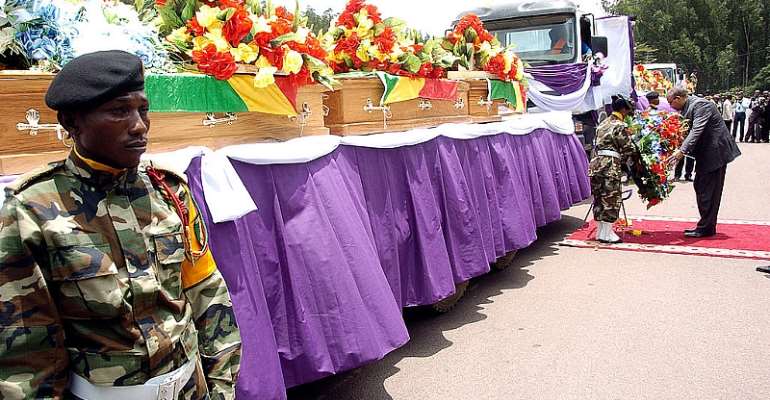 A lorry trailer carries the coffins of the victims of a munitions explosion in Brazzaville, the Congolese capital, in 2012. - Source: Junior D. Kannah/AFP via Getty Images

A series of massive blasts recently rocked Equatorial Guinea's city of Bata. The explosions, at an army barracks, killed over 100 people and destroyed military buildings as well as people's homes around the site. President Teodoro Obiang Nguema stated that the explosions were “caused by negligence of the unit in charge of storing explosives, dynamite and ammunition at the Nkoa Ntoma military camp”.

Unplanned explosions at munitions sites have occurred on all continents over the past 40 years, in both developed and developing countries. These can result in the loss of human lives and other preventable damage.

Explosions in and of themselves do not necessarily imply the mismanagement of stocks, as accidents can always happen, but many do result from mismanagement.

I work for the Small Arms Survey , an organisation that provides expertise on all aspects of small arms and armed violence. This includes a global database on unplanned explosions at munitions sites. It shows that the number of people who die, or are injured, in these incidents varies greatly.

While we should be careful about regional-level generalisations, the data suggest that Africa as a whole suffers a relatively high rate of casualties per incident. In fact, almost half of the 29,932 casualties from unplanned explosions at munitions sites recorded in our database – between 1979 and 2019 – occurred in Africa.

On average 170 people were wounded or killed in each incident that occurred on the continent. A dozen explosions with particularly high death tolls – such as in Lagos, Nigeria, in 2002 (1,500 people) and Brazzaville, Congo, in 2012 (500 people) – account for the vast majority of the casualties.

The most deadly events tend to occur when munitions sites are located near populated residential areas. This in itself tells us that safety standards are not being respected or that settlements have been established informally around the depot.

Investigations are still needed to assess the management of the Bata site in Equatorial Guinea. However, the high reported number of casualties and available satellite imagery should raise questions about the safety precautions implemented at and around the site.

There is no such thing as a zero risk level when stockpiling ammunition. But unplanned explosions that result in the loss of lives and resources can often be attributed to poor risk management. This should serve as a warning to other countries.

As is the case for military and security forces around the world, African states acquire and stockpile weapons and ammunition for their defence and strategic needs. However, not all forces have systems in place to ensure that these stocks are well accounted for and managed through the equipment's life cycle.

International guidelines for the safe storage of ammunition exist, but still need time and resources to be rolled out. In practice they are not yet systematically implemented due to a lack of political will and insufficient resources. There are also practical challenges on the ground, such as inappropriate technical expertise and infrastructure.

Unfortunately, few states are transparent about their stockpile levels and contents. For instance, the military data in the Small Arms Survey's global firearms holdings database is largely based on estimates. Only 28 countries have released information on their military stockpiles.

Data on ammunition stockpiles is even scarcer and generally less detailed. This can be due to states considering the data as confidential, or to inadequate inventory management systems and record-keeping.

Whatever the reason, the lack of information on stockpiles – and especially surplus stockpiles (ammunition that's labelled as unnecessary for the state) – can make it challenging for national authorities and international assistance programmes to anticipate and remedy problems.

The risks of stockpiling

Poorly accounted and managed ammunition stockpiles lead to safety and security risks. As time goes by, some countries procure more without disposing of old stocks, which gradually decay. Such surpluses are dangerous. Keeping unsafe ammunition increases the risks of accidental explosions and the materiel can malfunction.

Ammunition surpluses can also be vulnerable to diversion through theft, loss or unauthorised sale. This is because equipment that is not needed is often poorly accounted for and protected.

Some countries keep surpluses with the intent to sell them or because they do not wish to pay for their safe disposal. Yet the cost of destroying surplus is a small investment when compared with the much higher costs of cleaning up unplanned explosions at munitions sites.

National ownership and the development, adoption and implementation of regulatory frameworks and management practices are also critical for promoting accountability. This should include the establishment of dedicated national bodies that oversee and implement international best practices. They should provide competent and holistic oversight of the management of ammunition stockpiles.

Some countries could use local frameworks as the reference for ammunition management, others could use publicly available international best practices such as the UN SaferGuard International Ammunition Technical Guidelines and NATO Standards .

Regardless of the basis for the framework, clear investment and oversight by national authorities are needed. These must ensure that stockpile management practices are adapted to the specific needs of the country, promote efficiency with respect to strategic needs and security from diversion. They should also enhance safety through the anticipation and mitigation of risks associated with unplanned explosions.

Best practices recommend, among other aspects, to conduct a proper risk analysis when storing the ammunition. An important component involves measures that reduce the possibility of an explosion. These include fire safety precautions and protocols for the proper handling and surveillance (referring to the chemical stability) of the ammunition.

Precautionary measures also need to be taken to reduce the effects of a potential explosion. As can be observed on the satellite imagery of the Bata site, the military base was relatively isolated from civilian dwellings in 2004 when compared to today. Over time people settled in the area and the surroundings of the military base became more crowded. Proper safeguarding of the base should have prevented this development. Or the facility should've been moved to a better suited location.

By taking these important precautionary measures, countries will be taking key steps in saving lives.

Nicolas works for the Small Arms Survey, an organization that generates and provides expertise on all aspects of small arms and armed violence. It is an associated programme of the Graduate Institute of International and Development Studies in Geneva, Switzerland. As of 2019, the Small Arms Survey received unrestricted funding from Australia, Finland, Sweden, and Switzerland, as well as project-specific support from Canada, the European Union, Germany, Japan, the Netherlands, New Zealand, Sweden, Switzerland, the United Kingdom, the United States, the Arms Trade Treaty Voluntary Trust Fund, and the UN Trust Facility Supporting Cooperation on Arms Regulation, as well as service contracts from several United Nations agencies. Nicolas also serves as member of the Research Advisory Council for the RESOLVE Network, as member of the Advisory Board for the Geneva Peacebuilding Platform, and as board member for the Fondation Prix Henry Dunant.