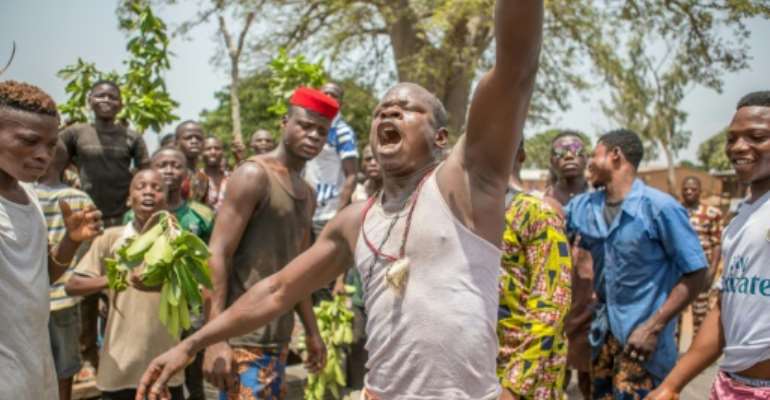 Opposition supporters had set up makeshift barricades to block traffic to protest against Talon. By Yanick Folly (AFP)

One person was killed and six were wounded by gunfire on Thursday, a local health official said, after troops in Benin cleared protesters in a flashpoint town three days before President Patrice Talon seeks re-election.

Protests have erupted in opposition bastions ahead of Sunday's vote, which critics say is skewed in Talon's favour after the main opposition leaders were sidelined in a crackdown.

A column of military vehicles arrived early Thursday to disperse demonstrators in the central city of Save, a flarepoint of protests two years ago, where makeshift barricades of trees and tyres blocked a major road.

Troops initially fired tear gas, an AFP correspondent at the scene said, and then more detonations were heard as a soldier fired in the air from an armoured vehicle. It was not clear if they were live or anti-riot rounds.

The director of a local dispensary in Save said he had taken in one dead and six wounded by gunshots.

"We admitted them at our clinic... One dead from a live round and six with bullet wounds," said Jose Godjo, head of the Boni clinic in Save. "All the wounded have been transferred to hospital in Save."

Benin, lying between Togo and Nigeria on the Gulf of Guinea, was once praised as a vibrant multi-party democracy in an often troubled region.

But critics say the country spiralled into authoritarianism after Talon was first elected in 2016.

The cotton tycoon faces two little-known rivals on Sunday -- most key opposition figures either live in exile or have been disqualified from running.

Talon, 62, is campaigning on his economic record, which includes improvements to key infrastructure such as roads, water and energy supplies. 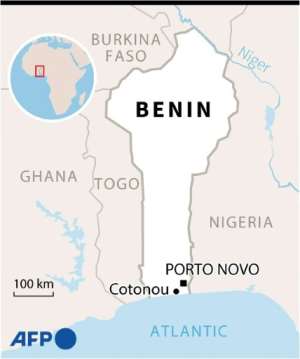 Map of Benin locating unrest in Save and Tchaourou. By Dario INGIUSTO (AFP)

In the final days of campaigning, the economic capital Cotonou was adorned with blue posters of Talon and his running mate, Mariam Talata.

But the usual fervour of presidential campaigns was missing.

"Since the return of the multiparty system in 1990, this is the first time the country has organised a presidential election like this: pluralist in appearance, but without choice in reality," said Expedit Ologou, a Beninese political scientist.

"And where the re-election of the president seems only a formality."

Following 17 years of military rule along Marxist-Leninist lines, the former French colony opened up into a multi-party democracy in 1990.

Talon, say critics, has used a special economic crimes and terrorism court and electoral reforms as tools to disqualify the opposition.

Still fresh in many memories is a political crisis that followed a disputed parliamentary election in April 2019. Tensions erupted into mass opposition protests that were broken up when security forces opened fire with live rounds. 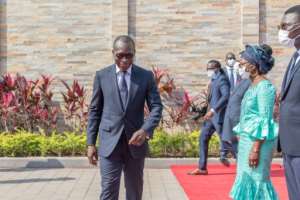 Talon has been accused of cracking down on opponents. By Yanick Folly (AFP/File)

Parties allied to Talon won all the seats after opposition groups were effectively banned. Some figures then fled into exile.

An amendment to the electoral law in 2019 also required presidential candidates to be sponsored by at least 16 deputies or mayors. Only six of these 159 elected officials belong to an opposition party.

That meant election officials disqualified many opposition figures from running in Sunday's vote as they lacked the required documents.

Tensions have been on the rise in the weeks before the vote. A leading opposition member was arrested accused of trying to destabilise the election.

This week, a judge from the special economic crimes and terrorism court fled the country claiming to have been pressured by the government to seek charges against opponents. 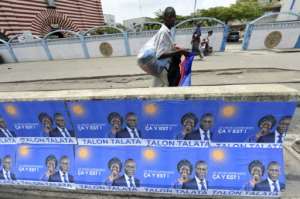 Talon, seen here with his running mate Mariam Talata on campaign posters in Cotonou, is expected to win on Sunday. By PIUS UTOMI EKPEI (AFP)

The government dismisses such accusations as "political manipulation" and claimed exiled figures were trying to have the election annulled.

"Even though his record is very positive, an election is never won in advance," said Talon's communications director Wilfried Houngbedji. "An election must be a party."

Analysts say low turnout could now be a real issue.

"Patrice Talon does not want to be elected with 20 or 30 percent of the vote, as was his assembly," said local political analyst Mathias Hounkpe.