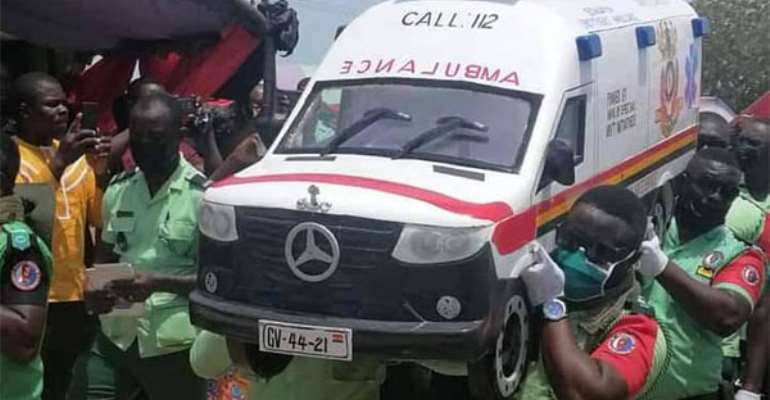 The specially made casket containing the remains of the deceased

Final funeral rights have been performed to see off the late Abraham Tetteh of the National Ambulance Service (NAS).

The venue was Old Ningo in the Greater Accra Region where Hundreds of mourners gathered to pay their last respect to him.

The 44-year-old senior Emergency Medical Technician (EMT), who before his demise was stationed at Somanya in the Eastern Region, was laid to rest on Saturday at Asleh Dahama family cemetery at New Ningo after laying him at Saglemi-Tsopoli of Old Ningo.

Senior staff of NAS and some government representatives including the Eastern Regional Minister joined other mourners at a solemn ceremony to pay glowing tributes to the deceased, extolling his virtues as a loving father and hardworking EMT.

In a tribute read by the widow, Vida Adede Teye, she described him as a man who sacrificed his life for his family, adding, “I miss him so much.”

The Eastern Regional Minister, Seth Acheampong, on behalf of the President, Nana Akufo-Addo, expressed his condolence to the family and also pledged the commitment of the government to work through the relevant security agencies to bring perpetuators to book.

He further talked about government's plan of initiating policies that would ultimately improve working conditions and safety of the ambulance personnel.

Abraham Tetteh, also known as Mawulaweh, was among two personnel of NAS who came under fire from highway robbers operating at Aseseso in the Eastern Region on the dawn of Thursday, February 4, 2021.

The officers were transporting a patient in forced labour from the Akuse Government Hospital to the Koforidua Regional Hospital when the said incident happened.

Shots fired by the robbers who were reported to have numbered seven, in an attempt to stop the speeding ambulance, caused serious injury to the eyes of the driver, who bled profusely.

The other personnel who is a female was also harassed by the robbers who tried to search her for valuables.

An attempt by an incoming vehicle to reverse upon sensing the danger ahead diverted the attention of the robbers from the ambulance, and paved the way for an accompanying relative of the patient to man the vehicle and drive its occupants to safety.

The deceased was rushed to a health facility in Adukrom and later to Mampong before taken to the Tetteh Quarshie Memorial Hospital and later the Accident and Emergency Centre of the Korle Bu Teaching Hospital, where he was pronounced dead some 48 hours later.

He left behind a widow and two children.