By Mohamed Abouelenen with Farid Farid in Cairo 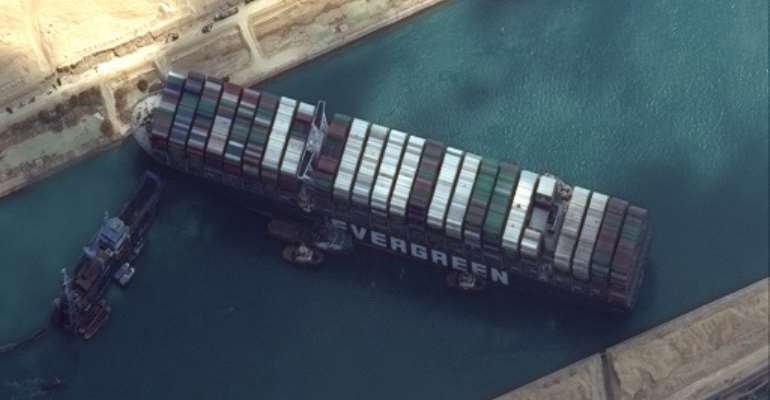 Egypt's Suez Canal chief said Saturday that "technical or human errors" could be behind the grounding of a huge container ship blocking the vital waterway, causing a backlog of over 300 vessels.

Osama Rabie, head of the Suez Canal Authority, told reporters in Suez that the ship could possibly be afloat again by Sunday night.

The crisis has crippled global supply chains, forcing companies to consider the expensive option of re-routing vessels around the southern tip of Africa.

Officials had previously blamed 40-knot gusts and a sandstorm that impeded visibility, but Rabie said Saturday that "strong winds and weather factors were not the main reasons for the ship's grounding -- there may have been technical or human errors".

But he sounded an optimistic note when asked when the vessel might be freed.

"We could finish today or tomorrow (Saturday or Sunday), depending on the ship's responsiveness" to tides, he said.

Billions of dollars-worth of cargo are now stalled at either end of the vital shipping lane linking Asia and Europe.

That has forced cargo firms to decide whether to wait it out or take the longer, more expensive route around the Cape of Good Hope -- at the cost of up to 12 additional days at sea.

Egypt is also losing some $12-14 million in revenue from the canal for each day it is closed, Rabie said. 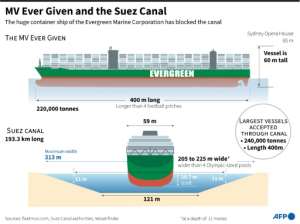 Graphic illustrating the dimensions of stranded container ship the MV Ever Given and the Suez Canal, where it is stuck. By Kenan AUGEARD (AFP)

The MV Ever Given, which is longer than four football fields, has been wedged diagonally across the span of the canal since Tuesday, blocking the waterway in both directions.

When will it move?

The canal chief's timeline echoed comments Friday by the ship's owners, but the parent company of the salvage firm was less optimistic.

Yukito Higaki, president of Japanese firm Shoei Kisen which owns the vessel, told local media on Friday that the ship could be freed from the canal bed by late Saturday. 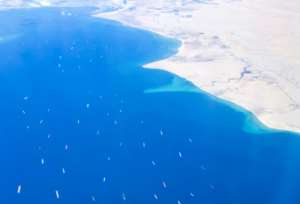 An aerial view taken from the porthole of a commercial plane shows ships stranded in the Red sea, as the MV 'Ever Given' (Evergreen) container ship continues to block the Suez Canal in both directions. By Mahmoud KHALED (AFP)

But the executive director of Royal Boskalis, parent company of Smit Salvage which is in charge of the salvage operation, suggested the ship could be afloat again "at the start of next week".

"We are already in the process of installing a crane on land," Peter Berdowski told a public television chat-show late Friday.

"That will allow us to eventually remove all the containers from the foredeck, which could involve hundreds of containers."

But Nick Sloane, 59, a South African salvage master who was in charge of refloating Italy's Costa Concordia cruise liner, said using a crane to remove containers would take time.

"If they have to do that, there's going to be a very long delay," he said.

The blockage has caused a huge backlog of ships at both the Red Sea and Mediterranean ends of the 193-kilometre (120-mile) long canal, causing major delays in the delivery of oil and other products.

Bernhard Schulte Shipmanagement (BSM) -- the ship's technical manager -- said efforts were focused on "dredging to remove sand and mud from around the port side of the vessel's bow".

Salvage crews worked through the night, using floodlights and a large dredging machine. 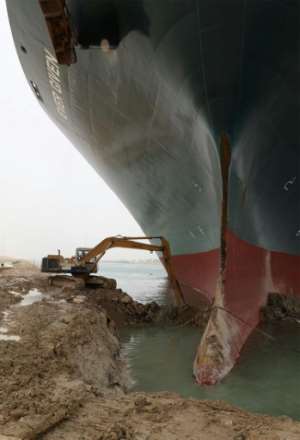 But the vessel with gross tonnage of 219,000 and deadweight of 199,000 has yet to budge, forcing global shipping giant Maersk and Germany's Hapag-Lloyd to look into re-routing around Africa.

"Shipping companies are being forced to confront the spectre of taking the far longer route around the Cape of Good Hope to get to Europe or the east coast of North America," said Lloyd's List, a shipping data and news company.

"The first container ship to do this is Evergreen's Ever Greet... a sistership to Ever Given," it said.

Lloyd's List said the blockage was holding up an estimated $9.6 billion worth of cargo each day between Asia and Europe. 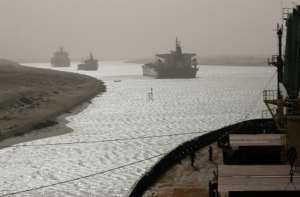 The Suez Canal blockage has stalled more than 200 vessels at either end of the waterway. By Christos GOULIAMAKIS (AFP/File)

The canal authority has said between 15,000 and 20,000 cubic metres of sand would have to be removed in order to reach a depth of 12-16 metres and refloat the ship.

If those efforts fail, salvage teams will look to unload some of the Ever Given's cargo and take advantage of a spring high tide, due to start Sunday night, to move the vessel. 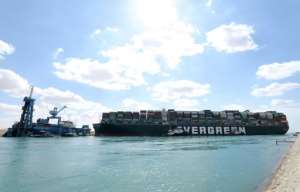 A dredger is used as salvage crews work to free the MV Ever Given, four days after it blocked the Suez Canal. By - (Suez CANAL/AFP)

Plamen Natzkoff, an expert at VesselsValue, said teams would likely throw even more resources behind their efforts in the coming days to make the most of that opportunity.

"If they don't manage to dislodge it during that high tide, the next high tide is not there for another couple of weeks, and that becomes problematic," he said.

"The stakes are too high for it to take months."