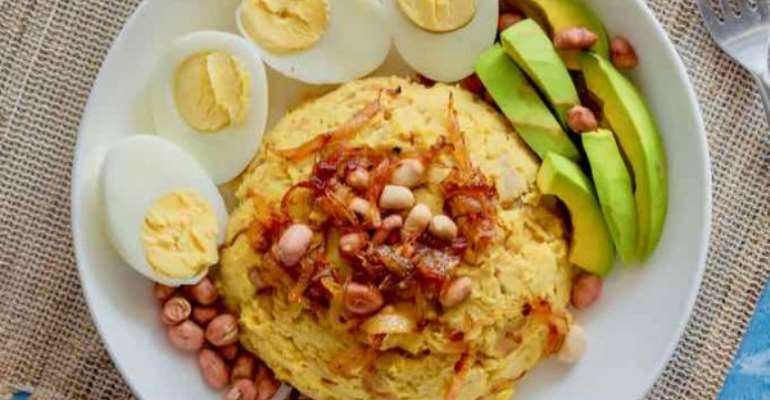 Demands and consumption of “Etor” (mashed yam), a Ghanaian celebratory and traditionally prepared dish are high in demand in the Bono Regional capital.

It is the favourite dish for employees, both in public and private sectors, and other residents in Sunyani, who mostly buy and consume the diet during lunch time.

'Etor' is prepared with boiled or roasted plantain, cocoyam or yam, and mixed with palm oil, but interestingly, many consumers say they preferred and enjoyed the type prepared with roasted yam or cocoyam.

Gradually, the dish has turned into a lucrative business for middle-age women in the capital, making huge sales out of it.

The food vendors were previously selling roasted yams, plantain, and cocoyam served with either roasted groundnuts or “Koobi” (salted dry tilapia), but many of them have switched to prepare and sell the “Etor”.

As the nation marks the “Ghana Month Campaign”, a Ghana News Agency (GNA) market survey in the capital reveals high consumption of the dish.

In an interview, the vendors confirmed they were making good sales.

The “Ghana Month”, is a month-long campaign which takes place in the month of March to coincide with the nation's Independence celebrations, to primarily project the country's indigenous products, food and services, and celebrate its cultural heritage as well.

“This is one of my favourite traditional dishes. I liked taking it every afternoon. Whenever I eat it, I drink a lot of water and it can sustain me till night time”.

“In fact I really enjoyed it,” this was the remark of a level 200 student of the University of Energy and Natural Resource (UENR) after she had had her lunch of Etor.

For her, an indigene of Sunyani, the dish is not only nutritious, but also enables her to spend less on food, as a student.

I sighted Joyce, (not her real name) around 1300 hours at a popular “Etor” joint at the Sunyani Business Central District (CBD) where I also buy the dish from the food vendor.

Other customers were also around, waiting patiently for theirs to be served by the middle-aged woman, only known as Mama Cecilia, as she sat busily behind heated fire to roast yams and cocoyam to dish.

Out of curiosity, I walked to the food vendor to find out how sales were going and engaged some of the customers in a conversation.

It was then I came to the realization “Etor” was not only the favourite of Joyce and I, but several others as well.

Some of the consumers around the joint said they enjoyed the diet because of its nutritional value.

Mama Cecilia used her bare hands to turn the yams and cocoyam on the fire to ensure the stuff were well cooked.

Thereafter, she gathered fresh pepper and onions, in a locally made grinding bowl, added a little salt, roasted groundnuts and mashed them together before she would add either roasted yams or cocoyam.

Interestingly, each of the ingredients used in the preparation of 'Etor' has high nutritional value and that builds the body system and immunity.

According to health experts, peas contribute to weight loss and reduce the risk of heart and kidney diseases, cancer, hypertension, and diabetes.

Yams are known to be good to facilitate easy digestion, and while eggs provide a good source of inexpensive high quality protein, the pepper and onions, the vegetables, are also healthy to build the body system.

When the food is ready, she either added eggs, peanuts or 'koobi' (dry salted tilapia), depending on the order of customers in a take-way bag, which also contained a rubber spoon in prices ranging between GH¢ 5 to GH¢ 10.

She explained though sales remained good, there had been reduction in her daily profits due to sharp increase in the price of charcoal in the Sunyani Municipality.

Mama Cecilia said the price of a bag of charcoal which ranged between GH¢ 25 and GH¢ 30 last year was selling between GH¢ 45 and GH¢ 60.

“This is actually affecting my business because my customers also complained about the reduction in the quantity of the food”, she added saying “prices of tubers of yams and cocoyam in the market have also increased for some time now”.

Asked about how she was coping with the heat from the fire, she said it was unpleasant, but as a single parent, she had no other option than remain in business for the upkeep of her family.

She said a medical report showed she had high blood pressure, adding because she stood on her feet for longer hours, she sometimes experienced some unusual pains around her waist.

Meanwhile, some vendors engaged in the dish travelled far from Kumasi to sell in Sunyani because of the high demand in the capital.

Most of the vendors were always sighted around public places, and office premises, and they sold the stuff between GH¢ 5 and GH¢ 10.

“I have several customers I serve here,” one of the food vendors told this writer, when she spotted her at the frontage of the COCOBOD building.

“The “Etor” business in Sunyani is good. I and three other sellers prepare the dish in Kumasi and traveled to Sunyani to sell”.

“We come here every day to sell and in fact we are making huge profits. For ours, we use ripe plantain to prepare it. Try and see and you will enjoy it,” Yaa Anima, the food vendor said.