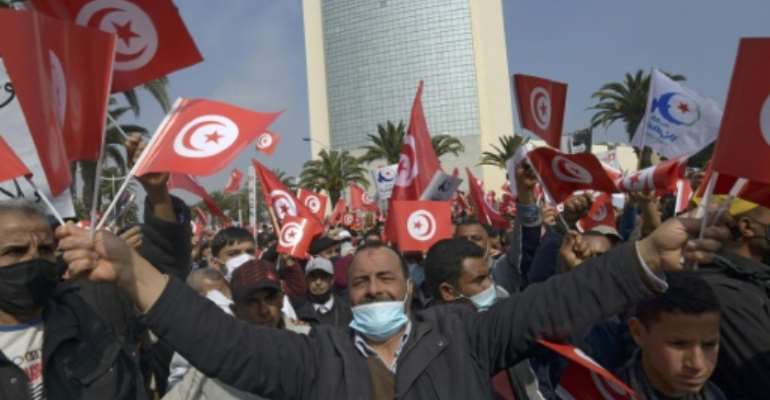 Supporters of Tunisia's Islamist-inspired Ennahdha party wave national flags during a demonstration in Tunis in support of the government following a cabinet reshuffle rejected by the country's president. By FETHI BELAID (AFP)

Tunisia's main parliamentary bloc Ennahdha rallied thousands of people Saturday in a demonstration of support for the government amid a tug-of-war with President Kais Saied.

The Islamist-inspired Ennahdha and liberal Qalb Tounes parties pushed for a reshuffling of the government by Prime minister Hichem Mechichi in mid-January, introducing 11 new ministers.

Saied has strongly criticised the reshuffle -- which was confirmed by parliament -- saying he had not been consulted and charged that some ministers were suspected of corruption and conflicts of interest.

He also refused to confirm the new ministers, including interior, justice and health, leaving the government paralysed, in a country already reeling from economic hardship and the coronavirus pandemic.

Saturday's protest in the capital Tunis was called for by Ennahdha, and several protesters said they rallied in support of the moderate Islamist party as well as for unity and democracy.

"We have a parliamentary system and it is not up to the president to decide who will govern," said protester Mohamed Khlif, who travelled from the coastal city of Sfax to take part in the rally.

"Democracy and the constitution must be respected," he added.

Around him protesters chanted "the people want national unity".

Saied, an independent academic and constitutional law expert, has also castigated the procedure for naming the new ministers, saying it was unconstitutional.

"I won't back down from my principles. I swore before God by putting my hand on the Koran to respect the constitution," Saied was quoted as saying earlier this month.

Tunisia's constitution does not require parliamentary approval for regular reshuffles.

But in the absence of a constitutional court in Tunisia, the political crisis has dragged on for six weeks with no solution in sight to ease tensions between the president, parliament and the government.

The political standoff comes as Tunisia has been hit hard by the coronavirus pandemic and its social and economic repercussions.

A report published Friday by the International Monetary Fund said the "Covid-19 crisis is exacerbating Tunisia's socio-economic fragilities" and "led to an unprecedented economic downturn".

The IMF called for urgent reforms to reduce the fiscal deficit, which it said was estimated to have reached 11.5 percent of GDP in 2020.

It also made a series of recommendations, including for limits on energy subsidies and lowering the wage bill.

Fix 'dumsor' or Twitter will ditch Ghana for Togo – ASEPA to...
54 minutes ago