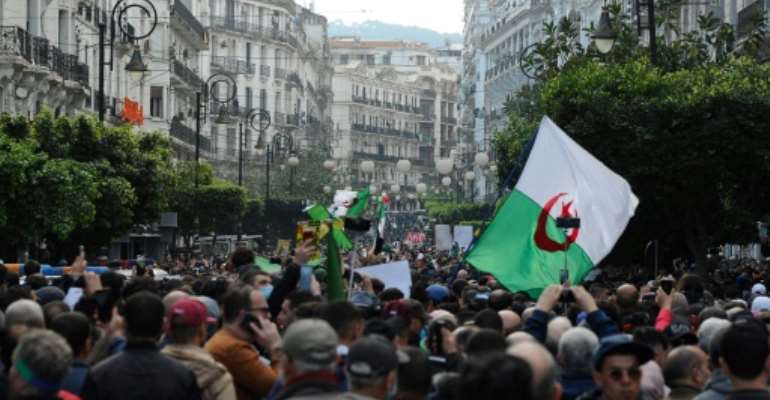 Hirak pro-democracy protests took place in the Algerian capital weekly from February 2019 until they were suspended over the coronavirus pandemic in March last year. By - (AFP)

Thousands of anti-government protesters took to the streets across Algeria on Friday, as the "Hirak" pro-democracy movement gathers renewed momentum after a year-long hiatus due to the coronavirus pandemic.

Despite a ban on gatherings over Covid-19, crowds rallied in several neighbourhoods of the capital Algiers in the early afternoon after Friday prayers and marched toward the city centre.

"It's awesome. It's like the big Friday Hirak protests," one demonstrator said.

The Hirak protests were sparked in February 2019 over president Abdelaziz Bouteflika's bid for a fifth term, and the long-time leader was forced from power in April that year.

Demonstrators kept up weekly protests after Bouteflika's resignation, demanding a sweeping overhaul of a ruling system in place since Algeria's independence from France in 1962.

They only suspended protests last March due to coronavirus restrictions, but calls have recently circulated on social media for a return to the streets.

On Thursday, rallying cries online also included calls for everyone to wear masks at the protest, after many had not at a Monday demonstration to mark the second anniversary of the Hirak protests that also drew thousands.

Protesters were met by security forces who used truncheons and fired tear gas when a crowd forced its way through a police barrier to reach the Grand Post Office, the main Algiers rallying point of the Hirak protests, footage posted on the Interligne news site showed.

From the morning, police vans had taken up positions near main squares in the city centre and roadblocks were set up on several major roads leading into the capital.

As if no time had passed since the last Friday demonstration in 2020, the crowds were full of the same flags and slogans. 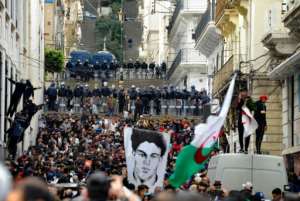 Security forces were deployed in Algiers, as thousands of protesters marched toward the central Grand Post Office. By - (AFP)

Cries rang out of "The people want the fall of the regime", "Free and democratic Algeria" and "Civil state, not military state" -- referring to the military establishment that holds sway over Algerian politics.

"Neither Islamist nor secular, but Hirakist," read a banner carried by protesters, with others shouting "peaceful", underlining the non-violent nature of the movement.

"We will not go backwards," called out a group of women on the margins of the march in Algiers, before the demonstrations broke up calmly in the late afternoon.

Algeria's President Abdelmadjid Tebboune -- elected in December 2019 on a very low turnout in a poll boycotted by the protest movement -- has made several bids to head off renewed rallies.

On the eve of the Hirak anniversary on Monday, he announced a limited government reshuffle and signed a decree dissolving parliament, clearing the way for early elections, though no date has yet been set.

In another gesture of appeasement last week, he announced pardons that have led so far to the release of dozens of pro-democracy activists, including journalist Khaled Drareni, who has become a symbol of the struggle for a free press.

Hirak supporters were unimpressed by his call for early polls and the reshuffle, seeing the new government as little different from the one Bouteflika headed for two decades.

"You have stirred in our hearts a revolution that can only be extinguished with your departure," demonstrators chanted on Friday.

For Algerian League for Human Rights vice-president Said Salhi, the new march "confirms the irreversible return and willingness to continue the Hirak with the same determination and commitment to the demands, including... a genuine change of the system".

Outside the capital, rallies were also held in the cities of Bejaia and Tizi Ouzou in the northeastern Kabylie region, as well as in eastern Bordj Bou Arreridj and northwestern Oran, where human rights activist and academic Kaddour Chouicha was arrested, according to prisoners' rights group CNLD. He was released later in the day.

More than a hundred others were arrested at rallies across the country, said Salhi in a Facebook post.

Amnesty International this week accused the Algerian authorities of a coordinated strategy to silence critics, based on an investigation it carried out on the cases of 73 activists who were "arbitrarily arrested" and prosecuted.

A/R: Over 500 houses earmarked for demolition in Afigya Kwab...
33 minutes ago