Defining and celebrating blackness in the face of French universalism 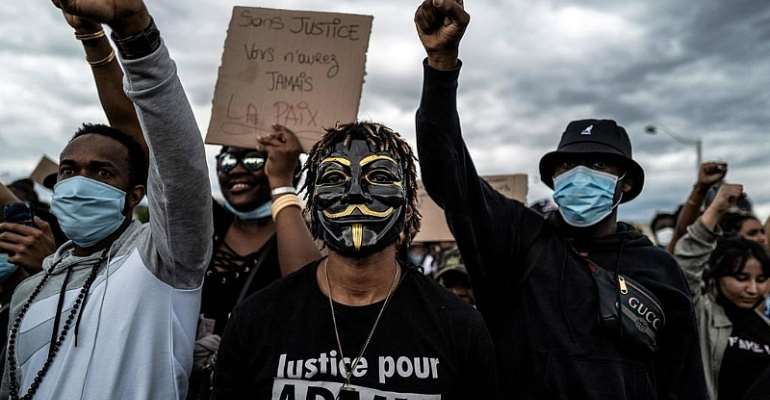 France has never had a Black History Month, despite its long history with Africa and the African diaspora. Attempts to start celebrations have found little mainstream support in a country, which prides itself on its universalist, colour-blind approach to race. But things may be changing, with Black Lives Matter pushing the issues of racism and discrimination to the fore.

When Maboula Soumahoro set out to organise Black History Month in France in 2012, she wanted to celebrate French black history, but she started with a focus on the United States.

Focusing on African American history was "an excuse to talk about black French matters," she says. “Because France is more ready and willing to talk about things that are black outside of France, meanwhile forgetting that there are black people in France.”

The first celebration, in 2012, was held in February. Then it was renamed Africana Days, organised around 10 May, marking the 10 May 2001 law in which France recognised slavery as a crime against humanity.

It lasted four years. Since then, Soumahoro, a professor of Africana and African American studies at the University of Tours, has focused her writing and thinking on race in France. She recently published a book about French black identity.

Listen to an interview with Maboula Soumahoro in the Spotlight on France podcast:

RFI: You organised Black History Month in France, and then Africana days, from 2012 to 2016. Why did you stop?

Maboula Soumahoro: We were not able to secure funds. One of our goals was to secure public funding from the government, partly because that is how things get funded in France, but also as a form of reparations. It was really important to have it funded and recognised, to get greater investment in these issues.

So our objective was funding, and it was also our difficulties. It's hard to secure funds on the basis of black French matters. So we had to maintain this transatlantic angle, this US angle. We had American guests along with French guests, which made things easier.

But we had trouble securing funds in the long term. Though I've seen other organizations who have taken it up. We'll see. I'm happy we were able to sow some seeds and foster inspiration. And we were not even the first ones. Before us, there had been other celebrations.

RFI: Why is it so difficult for France to address race?

MS: France, most of the time, limits itself to its European parts. And that neglect of the overseas departments is really what enabled France to cut off itself from racial matters—from blackness, and other racial or ethnic identities.

The presence of black people in mainland France is often associated with immigration, and foreignness, even though some of the overseas departments have been French territories since 1848. The dichotomy exists is only between nationals and foreigners, and if you're French, you're just French.

So blackness, as a concept is not supposed to exist. The fifth republic, our current constitution, does not recognise race as a legal category. But just because it doesn't work that way, legally speaking, doesn't mean that race and blackness do not exist; they just unfold in different ways

Reality doesn't match the lofty ideals in the constitution. I'm all for universalism, if it's real. I want to dream, but I need reality. I want my dreams to come true.

RFI: You have anchored your book, Le Triangle et l'Hexagone: Réflexions sur une identité noire (translated in English as Black is the journey, Africana is the name) in your personal experience, as part memoir, part analysis of black identity in France. Why did you feel the need to make it personal?

MS: This is really about coming out, or daring to say things the way they are, not the way we want them to be. I felt an imperative to make sense of my own trajectory: What does it mean to be born Maboula Soumahoro in Paris, France, and to have parents from Cote d'Ivoire, a former French colony.

What does it mean for me to be French, and a citizen of colour? Whether France wants to discuss it or not, it's not the issue

RFI: You spent several years living and studying in the United States, and today you teach African American history. What influence has the US had on your sense of identity?

MS: When I arrived in the US, I was identified as a black woman, but I was also identified as a French woman. In France, people would not tell me I was French. They would ask, 'Where are you from?' And to me, what prompted the question of my origins was the colour of my body.What happened to me in the US was this feeling of community, the feeling of being black, but also the recognition of my French citizenship. To my parents we were Ivorian, and we were African. And that matched the discourse from outside saying we were temporary French.

Academically in the US I found a lot of information and courses devoted to those matters, which I did not have access to in France. In the US I did not only meet Americans or African-Americans, there were also faculty from all over the world: the African diaspora, and even French people. I learned about Francophone literature, and authors like Maryse Condé and Edouard Glissant, and Francophone cultures, that I had never had access to in France.

RFI: The US has had an influence on you personally and professionally. But what about the influence on French racial matters, in general? There are often accusations that French activists are under the 'influence' of American racial ideas. And protest movements have seen a boost after the murder of George Floyd last year and the Black Lives Matter movement in the US. What is the connection between the US and France on racial matters?

MS: Since the establishment of the US, France has always had an eye on it. People tend to forget. France was an ally of the patriots during the war of independence. And since then there has been an intellectual and even political interest.

So for France to pay attention to George Floyd and Black Lives Matter is not surprising. But it gave the opportunity for French activists who had been organising around issues of police brutality and racial discrimination, to say to France: You're not going to hide, once more behind news coming from the US. There are issues in France too.

And there have been debates around police brutality and racism and discrimination, which have continued at an unprecedented level. So something happened. But things did not begin in France in 2020.

RFI: There is criticism in France that these ideas come from the US, and do not take into account of French universalism. How do you react to the criticism?

The fact that today they have to talk with us and get angry with us means they have to recognise us. They're still not treating us well, but at least they can't avoid us. This hostility is the marker of the more entrenched presence of people of colour.

Listen to a version of this interview in the Spotlight on France podcast.