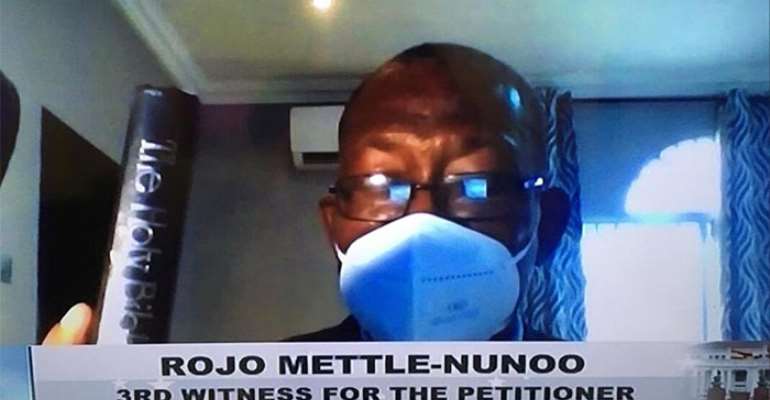 Lawyer Justin Amenuvor: “And even when you were there, you were offered tea and biscuits, not so?”

PW3 Rojo Mettle-Nunoo: “My Lord, I was offered tea, I wasn't offered any biscuits.”

By now I believe the NDC will forever curse the day they demanded that the proceedings at the Supreme Court as far as the election petition filed by Mr. Mahama, which also included that the apex court should air the proceedings live on national television stations, is concerned. It has become abundantly clear that, they have made a mess of themselves as all the three witnesses they presented exposed the lies and unpreparedness of the witnesses. I have consistently said that lies have short legs and what is happening at the Supreme Court vindicates me.

At the age and experience of Mr. Mettle-Nunoo, one was not expecting him to fall recklessly into the trap set by Mr. Justin Amenuvor. You see, lawyers do not ask questions just for the sake of asking. There is always a hidden motive when a lawyer ask questions. When Mr. Amenuvor, the EC lawyer popped out his trademark protruding eye balls and asked Mr. Mettle-Nunoo the above mentioned question, I was expecting Mr. Mettle-Nunoo to be smart and think fast before answering the question. Sadly the 'too know' behaviour he portrayed at the Supreme Court gave him away as someone who speaks before thinking of what he should say.

Foolishly admitting that he was given only tea but no biscuit made him look so poor in stature. When you have been charged to be the watchdog of the plaintiff in the case and you abandoned your post to spend a considerable length of time at the reception of the EC chairperson and also offered tea which you willingly accepted and drunk, and spent about three hours there while results were being collated, you do a disservice to the one who sent you there to be his third eye. In other words, you have literally abandoned ship while the ship is facing turbulent waters. And indeed, if two persons who were charged to observe proceedings at the 'strong room' allowed themselves to be tricked as narrated by Dr. Kpessa-Whyte, to go and consult with the petitioner and the two of you agreed to go like Zombies together to consult the petitioner, leaving the job of observing undone, the only universal adjective to describe both of you is the same. “IRRESPONSIBLE”.

By admitting that he was offered only tea at the Commissioner's office goes a long way to explain that, Mr. Mettle-Nunoo was enjoying while Rome was burning. Is this old man saying he did not drink tea at home before setting off to the Electoral Commission (EC)? By now the NDC supporters who took to the streets, ranting, raving, kicking like Bole/Bamboi bulldogs and destroying properties and insisting that Mr. Mahama won the election as they were made to believe by their tea-drinking leaders should rethink. When they were out there disturbing the peace and working themselves out, little did they know that the man who was charged to see to it that the election was fair was having a tea party at the office of the EC. If Mr. Mettle-Nunoo were to be a Fante man, I would not have had any problem with him when he accepted the tea because Fantes are well known for their love for tea and corned beef. As a Ga man, he should have asked for Ga Kenkey when he was offered the tea because Ga Kenkey is the delicacy of Ga people.

The case of Dr. Kpessa-Whyte is more mind-boggling. A person who holds a doctorate degree acted like a class one pupil when he should have known better. And the man was not ashamed of himself when he boldly told the apex court that he was tricked by the chairperson of the EC to do what he did. A whole lecturer being pushed around by a small girl like Jean Mensa! Very sad indeed! Did the two agents of Mr. Mahama obey the lady because of her beauty or what? The worst scenario of Dr. Whyte's ignorance at the Supreme Court hearing was when he complained that he could not see the face of Her Ladyship who asked him a question. It took the Chairman of the Court to remind him that he (Dr. Kpessa- Whyte) did not need to see the face of the judge before answering the question. Even me, a form four leaver knows that. And a whole “Dr.” doesn't know that at the Supreme Court hearing, which is telecast live, cameras are not focused on the judges for security reason. I can imagine how this man is poisoning our children at the university where he teaches.

This time around, again, he did what he knew best by cheekily answering a question during a cross-examination by Lawyer Justin Amenuvor, counsel for the EC, and once again listen to the smart lawyer: “You are not being rude to me but you are being rude to the Court.” This village bully is for sure not a role model for the younger generation. But you see, you don't expect somebody who was literally plugged from a village in the Brong Ahafo Region by the late Mr. Rawlings to join the murderous revolutionariesto show politeness. After all, did the sages not say like father like son? What is more serious about the behaviour of this man is that the NDC, the party he belongs to, continue to urge him on. In fact, he himself doesn't know he is being made to look like the monkey at Kumasi Kejetia which was used in the years gone by to sell local drugs. These monkeys dance to the clapping of hands by children to attract buyers.

When dreams and hopes are shattered, disappointments take over. While writing this piece, the word: 'illusion' came knocking on my already disturbed conscience. For the twenty two years that I have been writing this column, I seldom consult my lexicon and as I have been telling my readers, I have enough arsenal which contains uncountable English vocabularies to dish out to my cherished readers, hence my decision not to consult my many dictionaries which I acquired during my quest to grab the Golden Fleece. This time around, as I used to do in my moment of absolute tranquility, I went for my dusty Webster's Dictionary of Contemporary English. And this is what it said: ILLUSION: “An erroneous mental representation”. This is what exactly the supporters of the NDC found themselves when they were misled by their leadership to believe that indeed, Mr. John Mahama won the 2020 Presidential Election and that very soon Mr. Mahama will be sworn in as the Executive President of the Republic of Ghana. What an illusion and an insidious farce. I am Itching to go back to my cigar-smoking days so excuse me while I light up!!!

Dilapidated Meridian Hotel is a death trap, demolish it - Te...
9 minutes ago