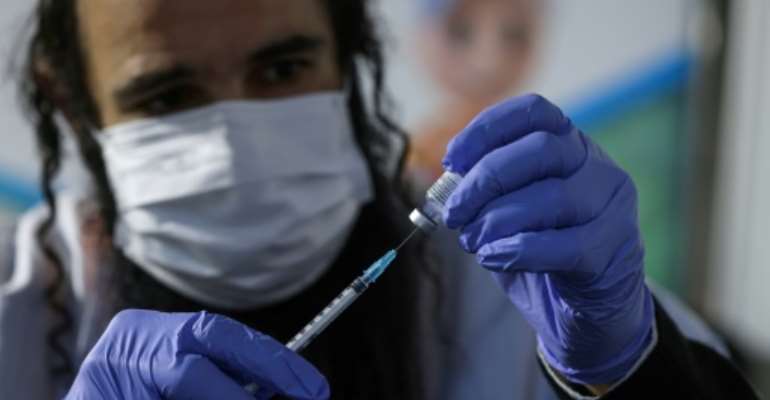 An Israeli health worker prepared a dose of the Pfizer-BioNTech Covid-19 vaccine at Clalit Health Services in Jerusalem earlier this month as part of a vaccination campaign considered one of the largest in the world to date. By MENAHEM KAHANA (AFP)

Pfizer or Sinopharm? The US or China? In the Middle East and North Africa, novel coronavirus vaccine orders are driven by diplomatic and logistical considerations, reflecting Beijing's growing regional influence.

In recent days, the Israeli government made documents public that showed the extent of its collaboration with US pharmaceutical giant Pfizer in its vaccination campaign, one of the largest in the world to date, with more than a quarter of its nine million inhabitants already vaccinated.

In return for swift delivery, Israel -- with its vast digitised medical databases -- is giving the company data on the efficacy and potential side effects of the vaccine based on indicators such as age and medical history.

This extensive cooperation is no surprise given Israel is Washington's main strategic ally in the region.

The Jewish state has also ordered millions of doses of the vaccine developed by fellow US firm Moderna, the least ordered vaccine in the region so far.

Other countries in the Middle East, including Saudi Arabia, Qatar, Kuwait and Oman, are also relying heavily on the Pfizer vaccine, developed by the US company in partnership with Germany's BioNTech.

Iraq, Jordan, the United Arab Emirates and Bahrain, on the other hand, hedged their bets by ordering from both Pfizer and Sinopharm, with the Chinese vaccine now deemed "completely safe" by the UAE.

For Yahia Zoubir, a specialist in relations between China and the Arab world, vaccine choice rests on considerations such as price and cold storage requirements -- -70 degrees Celsius for Pfizer (-94 Fahrenheit), but two to eight degrees Celsius for Sinopharm.

But politics are never far away, says the professor at Kedge Business School in France.

Since the start of the pandemic, the administration of former US president Donald Trump "closed in on itself, while China has deployed health diplomacy", he told AFP.

"The Chinese have been much more active and much more cooperative."

Beijing has exported millions of masks and gowns to the Middle East and North Africa and elsewhere, as well as providing respirators and holding online seminars with medical authorities in various countries.

"Today, with the new silk road, there is also a health silk road," Zoubir said, referring to China's globe-spanning infrastructure push -- the Belt and Road Initiative. 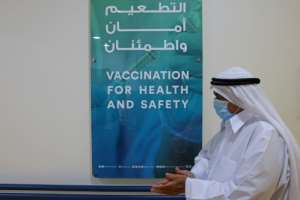 The United Arab Emirates, along with several other Middle East countries, has ordered doses of the Pfizer-BioNTech vaccine as well as that of Sinopharm, which has been deemed 'completely safe' by Abu Dhabi. By GIUSEPPE CACACE (AFP/File)

"Health is becoming a part of China's foreign policy, allowing it to expand its circle of friends" in a region that accounts for half of Beijing's oil imports.

According to Jonathan Fulton, a specialist in Chinese-Middle East relations at Zayed University in the UAE, "there is a lot of pressure on (US) allies and partners not to cooperate with China".

Despite this, he added, as the US floundered in its own response to the pandemic, a "transition took place from China as a victim" to China as a supportive and "credible actor".

With its Belt and Road project, Beijing is "looking to build a forward-looking Middle East presence" but not necessarily to replace the US, he said.

Sinopharm jabs also feature in the vaccine orders of other US allies in the region, like Egypt and Morocco.

Analysts say collaboration could be aimed at ensuring Chinese vaccine production and distribution centres for the region and Africa are established in their territories.

"It seems obvious that Beijing's prestige is on the upswing in an area that has long been one of American dominance," said Steven Cook, a senior fellow for Middle East and Africa studies at the Council on Foreign Relations.

"People in the Middle East have always looked to the United States as the global technological powerhouse and problem solver," he said.

But so far the US "has been mostly absent when it comes to 'vaccine diplomacy'... mostly because of President Trump's America First agenda, which eschewed international cooperation and devalued science," he added.

Also in the "vaccine diplomacy" field are the United Kingdom, relying on an AstraZeneca-Oxford University jab that has been ordered by a clutch of countries in the Middle East and North Africa, while Russia promotes its own vaccine, Sputnik V.

Algeria, a longstanding Moscow ally, ordered the Sinopharm jab as well Russia's, which costs less than those of its Western rivals but has had its reliability called into question, with one local media outlet alluding to "Russian roulette". 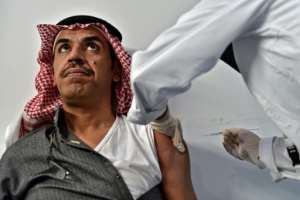 US ally Saudi Arabia, which launched its Covid-19 vaccination campaign in December, is relying heavily on the Pfizer-BioNTech vaccine. By FAYEZ NURELDINE (AFP/File)

In Ramallah, seat of the Palestinian Authority, which cut ties with the US under the Trump administration, many are awaiting the delivery of Sputnik V doses, while 2.5 million Israelis have already received at least one Pfizer-BioNTech jab, a disparity criticised by rights groups.

Iran, arch-enemy of Israel, has refused Western vaccines and said it will rely on jabs from India, China or Russia, while also working to produce a homegrown shot, as it battles the region's deadliest Covid-19 outbreak.

Even if China appears to be out ahead in "vaccine diplomacy", factors including a new US policy direction under President Joe Biden, an avowed multilateralist, could shift the playing field, according to Fulton.