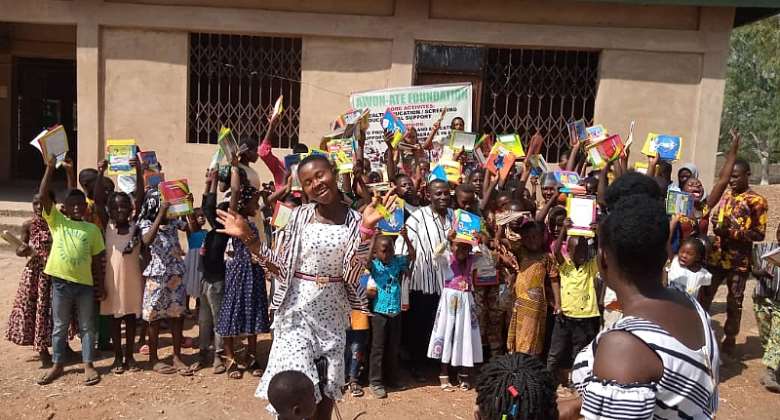 Awon-Ate Foundation, a non-governmental organization whose mission is to provide health and educational support to the vulnerable in both Builsa North and South districts has been successfully launched.

The Foundation was launched on 3rd January 2021 at St Peter & Paul Parish in Fumbisi, the district capital of the Builsa South District of the Upper East Region.

As part of activities marking the day, the foundation has distributed various educational materials to needy school children within the Builsa South District to help them prepare as schools resume after the untoward impact of the Covid-19 pandemic on the education of children.

The foundation climaxed its activities on 4th January 2021 by screening 104 people for various health conditions such as Hepatitis B, Blood Pressure, Sugar levels, among a host of other health conditions. Persons who had severe health issues were given a referral for immediate treatment.

Awon-Ate foundation is founded by Mr. Martin Anab, a Senior Nursing Officer who has had first-hand experience working with voluntary medical teams over the years to assist the less privileged within its catchment area.

The objective of the foundation is to reach out to the less privileged; especially orphans, the handicapped/physically challenged, the aged without anyone to support them, poor widows/widowers, the homeless among others.

According to Madam Beata Awentemi Anab, Secretary of Awon-Ate Foundation, since its formation the foundation has assisted three students to gain admission into the Nursing and Teacher Training Colleges respectively and has since provided students with varied educational support.

During last year's Christmas festivities, the foundation through the support of its donors has brought smiles to the vulnerable in the Builsa South district in various ways. For instance, the foundation feted over 80 needy kids with a delicious meal during the festivities.

Also, the foundation has distributed six bags of used clothing and detergents to the vulnerable in communities such as Fumbisi, kanjarga, and Batursa on the 23rd, 30th, and 31st December respectively to alleviate their hardship.

The Awon-ate foundation used the opportunity to appreciate all its donors and contributors for their generous gesture which enabled it to support families and changed the lives of the Vulnerable in the district.

The Foundation has therefore appealed to the general public especially, indigenes of both Builsa South and North districts (both home and abroad), government and its agencies, other NGOs, individuals to come to its aid to enable the foundation to continue its good works in its catchment area.

Reach out to the writer on
@analimbeychris (Twitter) or [email protected]