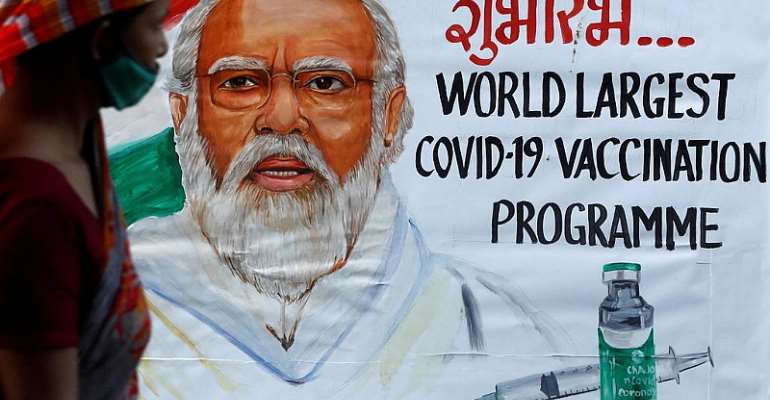 Indian Prime Minister Narendra Modi kicked off one of the world's largest vaccination drives with two locally-produced Covid 19 shots which will go into the arms of healthcare workers in the first phase of a vast exercise to inoculate millions by mid-summer.

“Never before such an enormous inoculation drive been attempted in the world,” Indian Prime Minister Narendra Modi told paramedics at 2,934 medical centers, where 300,000 healthcare workers were listed for Saturday's inaugural jabs.

Around 30 million healthcare and frontline personnel would get priority shots followed by 270 million others in the first leg of India's Covid-19 immunization program, set to be completed by July.

“Our vaccination program is driven by humanitarian concerns…Those exposed to maximum risk will get priority,” Modi said via video-conference.

A total of 2,238 doctors have been infected and 382 died from Covid-19, according to the Indian Medical Association.

The government has sent 16 million shots to the vaccination centers where the healthcare workers will receive two doses each free of cost.

“This is the beginning of the end of Covid,” Health Minister Harsh Vardhan said.

With 10.5 million infections and 152,000 Covid deaths, India is the second worst-affected country after the US but it has posted high recovery and one of the world's lowest mortality rates.

Government fights efficacy "rumors"
Saturday's celebratory launch came with a stout defense of Covaxin, a locally-developed Covid-19 shot which has received limited approval as its final phase efficacy results were expected by March.

“People must stay away from rumors and propaganda of any sort,” prime minister Modi said.

State-run Indian Council of Medical Research, which developed Covaxin jointly with a private drug-maker, insisted the vaccine was found to be safe after human trials that began in November.

“We have found that there is no problem in terms of safety in these 2,500 individuals although half of them got placebo and the other half got the vaccination,” Council head Balram Bhargava told state-run TV.

The government has purchased 5.5 million doses of Covaxin from its manufacturer – Bharat Biotech International.

India's Serum Institute, the world's largest vaccine-maker by volume, has also supplied 11 million doses of a vaccine developed by Oxford University and British drug firm AstraZeneca, which is locally branded as Covishield.

Bharat Biotech has also told local media it would produce 700 million doses of Covaxin a year after setting up four new drug factories in India.

Vaccine jitters
A forum of doctors at Delhi's prestigious Ram Manohar Lohia Hospital in a letter to the authorities said Saturday they preferred Covishield over Covaxin.

“We request you to vaccinate us with Covishield which has completed all stages of the trial before its rollout," the forum said.

But physicians at other city hospitals said they had no misgivings over the locally-developed vaccine.

“Both vaccines have gone through scientific scrutiny before they were authorized for emergency use,” the government minister said and asked people to turn their backs on “rumors.”

Manish Kumar, a 33-year-old cleaner in a city hospital was the first to get the shot in Delhi.

“Initially, I was nervous but then I overcame my fears and took the shot,” Kumar said after he was injected a Covaxin dose in front of television cameras.