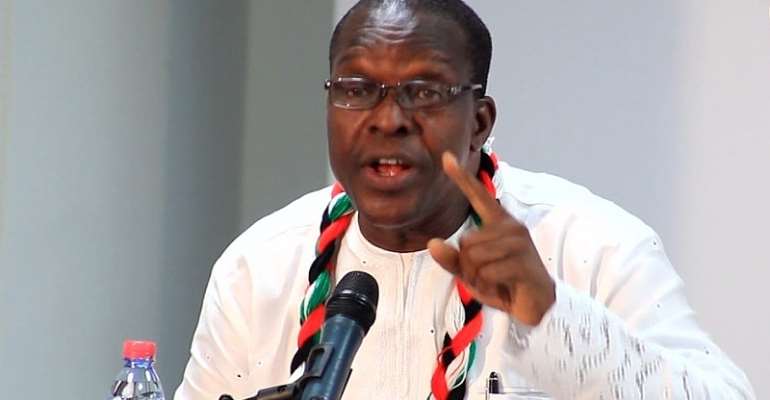 This immediate past Wednesday, January 6 2021, I started off the day with something approaching a depression - one of those situations when you feel some unhappiness needling you, but not knowing what to do about it. Only that, this time, I had an idea: events in our parliament later in the day (Election of Speaker) and events on Thursday, the next day (Inauguration). Both events possibly going to add more pain to the grand larceny of Election 2020.

I was also following events with some trepidation in faraway USA about the certification by congress of President-elect Joe Biden’s November 3 2020 win and what Donald J. Trump could to do upset it, Biden and Kamala being my candidates!

I went through the day like a zombie, only to be jolted back to life by developments in our parliament and the US Congress later in the night, confirming for me yet again the coincidences of Ghana-US election cycles with high drama in both Houses. The developments could not have been more like twins – though un-identical. In our parliament, it was the pitting of political wits by the NDC and NPP. In the US, it had taken on a decidedly violent nature with Trump supporters attacking Congress, leading to loss of life. How the US could have ended in 2016 with what essentially was a bar room brawler as president, is a matter best left to how over the years their significance as the policeman and benefactor of the world been allowed to wane so badly. Trump has been shown the red card and in two weeks time, he will leave the field.

We in Ghana ended 2016 with a hubristic one who took us through four years with the most nugatory leadership style and as trump leaves, he is hanging in somewhat, but our game is not yet over. On January 6/7, he met his comeuppance on the floor of parliament with a most humiliating defeat on the election of the Speaker. His candidate Prof. Mike Ocquay was shunted to the side by the deftness of smart political hands. It was supposed to have been the icing on his half-baked cake but turned the cake into char and the icing into goo – a shocker!!!

To be fair to myself, with Trump out of the way, and this shocker, if I say I am not gloating, I am lying. Humility, I am told does not countenance gloating, but I plead exemption this time. My feeling of depression has since evaporated. Allow me to comment on some highlights of the 8th Parliament of the 4th Republic of Ghana:

The election of The Rt. Hon. Alban Sumane Kingsford Bagbin as Speaker of Parliament was nothing short of miraculous. After imagining that they had succeeded in denying John Mahama his second term through the fraudulent Jean Mensa elections, Nana Addo and his less than honourable henchmen now turned to how they could dominate parliament with the Speaker’s position. All the disenfranchising of voters by the likes of Amewu, and similar moves at other constituencies like Techiman South, Assin Fosu North, etc., were meant for the NPP to deny the NDC what its rightful place in this parliament – the Majority. After thinking they had snatched the presidency from the NDC’s presidential candidate, what next but the speaker’s chair?! We are told that “Man proposes, God Disposes”. God’s hand was clearly at work here. This outcome has shocked us all. Those of us who thought we would be cheated again and those who thought they could cheat again were swerved! This clears any doubts as to who really won Election 2020, John Mahama or Akufo-Addo? The Rt. Hon. Speaker in his new raiments is already exuding what I believe would be a more forward-looking legislature.

As a footnote, I understand that a number of names were considered but with JM’s good counsel, the Rt. Hon. Bagbin’s name prevailed…And what of the Rt. Hon. Rev. Prof. Mike Ocquay? Time perhaps for him to spend more time playing with his grandchildren and as some wag put it, reading newspapers!!

If not for the fact that this caper is so dangerous to our democracy and exposes what really took place during the December 2020 elections – cheating and stealing – one would have laughed it away as the desperation of a political party with an unwholesome “mandate”, but no, let us not trivialize it for it lies at the core of why Election 2020 is so flawed. I agree with President Mahama when he said in a statement congratulating the new Speaker, that parliament must take it up and investigate and also impose appropriate sanctions. Derisory action, yes, but a trivial one, no.

Under whose orders did the heavily armed contingent of soldiers, police or vigilantes invade parliament? This was an act of treason and I agree with Hon. Sam George’s (MP, Prampram) call for a full investigation into this clear and present threat to our democracy – the first in our 4th Republic. No need to belabor this, every patriotic Ghanaian must rally behind this call. The call is not simply for an investigation, but a court martial…

In 2017, it was a plagiarized inaugural speech that turned Ghana into the laughing stock of the international community and embarrassment for Ghanaians at home. In 2021, much of the same thing: an event completely without national acceptance and gravitas – what Hon. A. B. A. Fuseini (MP Sagnargu) described as a “bogus inauguration”. And if one may ask, what was an outgone Speaker’s picture doing in the inaugural souvenir brochure? Had they concluded beforehand that Mike Ocquaye was going to be returned as the Speaker of the 8th Parliament? You see what hubris can do? Taxpayer money gone down the drain. Who is being surcharged with this waste? Someone must be: the presidency or state protocol department?

And so after this hollow public outing, now to wait and see how the SC would do the needful to bring us all together in one major ecstatic celebration of national pride!

No matter from what angle January 6/7 2021 is looked at, the NDC exhibited much superior strategy/tactics and political sophistication than the NPP. What is left now is for the NDC MPs to show that kind of sophistication in guiding policies that are close to their party’s ideology of social democracy that would would accrue positively to all of us. They must also constantly be on their toes to adopt/adapt best practices and crucially set up a peer review mechanism to constantly remind themselves of their responsibility to the electorate. A breath of new ideas is a MUST! This Bagbin Miracle cannot and must not be squandered. Floreat Dormus…