It was touted locally as one of the biggest campaigns of the decade when, in 2016, Kenyan environmentalist Phyllis Omido took up the fight against lead poisoning by a lead-acid batteries recycling smelter in Owino Uhuru slum, in the coastal city Mombasa.

Ms. Omido, 42, went to court on behalf of the slum’s 3,000 residents, and four years later, on 16 July 2020, the court ruled in their favour, awarding USD 12 million to those affected by the lead poisoning.

The money was to be used for their medical treatment and compensation for deaths that resulted from the poisoning.

The government was to pay within 90 days for failure to enforce environmental regulations and measures on the company - Metal Refinery EPZ. Opened for business in 2007, it was not until 2014 that the factory was permanently closed.

However, the Attorney-General and the National Environment Management Authority (NEMA) filed an appeal against the ruling.

In the appeal application, NEMA stated that their budget was not large enough to pay for the clean-up of the slum, while the Attorney General’s office said it is dissatisfied with the ruling as the liability of compensation, clean-up and treatment of the residents should be taken up by the smelting company and not the government.

But Ms. Omido is not relenting, and has launched a campaign against the government’s appeal. Through her organization, the Centre for Justice, Governance and Environmental Action (CJGEA), the initiative is also expected to raise funds for medication and treatment for those experiencing the effects of the lead poisoning.

“As we wait for the appeal, we have victims hospitalized, those living with conditions like kidney and liver failure and many children with skin diseases. All this is as a result of the lead poisoning,” said Ms. Omido.

Ms. Omido says that the campaign has so far raised $1,000. The ruling on the government’s appeal is expected on 17 February 2021.

“There is nothing that can be done following the appeal application by NEMA and the Attorney General’s office. Everything — the slum clean-up, treatment of the sick — will have to wait until the ruling on the appeal is made,” said Ms. Omido.

Ms. Omido, who led a campaign to close the smelting factory in 2014, worked through CJGEA to bring the case to court in 2016, seeking compensation and justice for those affected by the lead poisoning in the Owino Uhuru slum after several failed attempts to negotiate and settle with the government and other entities involved.

In her 2020 ruling Justice Anne Omollo observed that the Owino Uhuru community’s rights to a healthy environment, clean and safe water, and life had been contravened and therefore the government and the smelting factory should pay the compensation.

NEMA, the government agency responsible for the environment, and the lead smelting company were ordered to clean up the slum — the soil, water and waste — for any remaining lead poison. Failure to do so would result in a fine of $7 million to CJGEA to organize and coordinate the clean-up.

In 2015, the Kenyan Senate Committee also conducted a study on lead poisoning in the slum and found that there were indeed signs of lead in the environment and that children showed visible symptoms of lead poisoning in blood tests.

The Senate then concluded that the environment was not fit for human settlement and recommended that the government should deal with the poisoning and conduct the clean-up of the slum.

“When we realized that the government agencies had no knowledge on environmental clean-up of lead poisoning, we brought in experts from America to train state agencies on how to clean up lead poisoning in the environment,” said Ms. Omido.

Li Fung, a Senior Human Rights Adviser with the Office of the UN High Commissioner for Human Rights (OHCHR) says the 2020 landmark judgement by the court was a victory for the community, environmental human rights defenders like Ms. Omido, and for environmental justice in general.

“OHCHR is continuing its support to Phyllis [Ms. Omido] and her organization,” says Ms. Fung. “It is important that we act to uphold and defend the civic space for these human rights defenders to continue their vital work.” 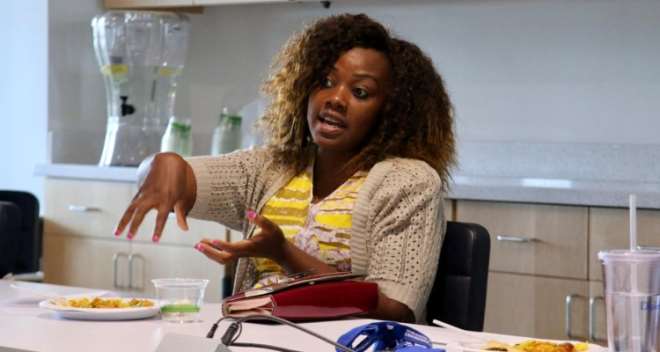