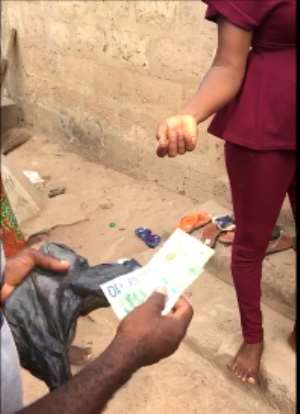 The principal reason Amewu won the Hohoe seat was because he bribed the voters more than his opponent did. He did not take the seat by winning the hearts and souls of the people. He worked his way through their wallets and their stomachs.

It is an offence against the electoral laws of the country to bribe, or attempt to bribe, anybody to vote for you. But bribing voters is now a widespread and seemingly acceptable practice in the country.

Amewu had so much money and goodies to distribute to the electors that there was a lot of it left even after the elections. On the eve of the vote, his seconds were begging people to take his money and vote for him.

The people of the constituency were overwhelmed. They had always voted for NDC without anyone bribing them to do so. Then, suddenly, here is someone giving them so much if they could only thumb for the NPP man. He distributed so much money that the recipients found it difficult to go against their conscience by not voting for him. After all, these are people who are not die-hard ideologues and are easily swayed by a little money. Talk to the ordinary citizens receiving Amewu’s freebies and they will admit to you they are just simple folk who really don’t care about NPP or NDC.

Amewu’s aids targeted the most vulnerable in the society. In Wli, his mother’s hometown, everyone was given at least 40 GHS. In other areas, 10 or 20 cedis were enough. Videos abound of Amewu’s seconds doling out new cedi notes (they were always brand new) from black plastic bags like candy to kids. The chiefs were given bigger amounts.

Amewu’s people gave out cutlasses, electric bulbs, rice, oil, Wellington boots, soap, gas stoves, cloth, petrol and beer. Some families even received flat-screened televisions. These things were not given to alleviate the sufferings of the people. They were given with the expectation that they would vote for the giver. It was not philanthropy.

A day before the voting, scores of STC buses descended on Hohoe and disgorged voters (including kids) from Accra brought in to ostensibly vote for the candidate. STC has stopped its Hohoe route for several years now. The people were surprised to see so many STC buses. Many did not even know the corporation has so many in its fleet!

There are rules against bribery. The EC’s webpage has a Dos and Don’ts of the voting process. First on the Don’ts section is “Abstain from bribery” ahead of “Avoid undue influence”.

But the EC does not go into detail about the consequences of being caught infringing the rules. It only says that anybody who notices any infringement of the rules should report to the officials of the commission. Often, nothing happens when such complaints are made. Some of the rules are murky. Is it okay to distribute t-shirts but not cash?

All the candidates bribe the voters. Amewu only took this to unprecedented levels. Since he contested in a constituency hostile to his party, he had to be extra generous to enable him turn the tables. His opponent, strapped for cash, could not match him!

Nobody has ever been prosecuted for bribing the electors. We do not take the whole issue of campaign financing seriously. In the US, whose political system we have partly copied, people go to jail for illegal campaign contributions. This is unheard of in Ghana!

Amewu’s opponents are not contesting his election because he bribed the voters. They cannot hold him culpable of an offence all of them commit. Instead they are raising the issue of the disenfranchisement of parts of the constituency they believe enabled him to win. The NDC candidate is a native of one of the disenfranchised villages. The people could not vote for their own daughter. Whether his opponents have the financial wherewithal and the legal prowess to win a court case in a judiciary in the pockets of the ruling party is yet to be seen.

Some see receiving bribes as a way for the poor to get back some of the money the politicians stole from them. But is this the kind of income re-distribution we want?

We should ask questions about the use of bribes in our elections. Where did Amewu get all the funds from? How could one individual hire so many of the state’s buses for a purpose that is to his personal political benefit? Has he ever declared his assets?

What can we do? One suggestion is that the state should fund political parties. Any party which gets, say, 10 percent of the votes in an election should be supported with a corresponding amount of money in the next elections. This will disadvantage new parties but they only have to clear the first hurdle.

The obvious objections are that the state does not have the resources and the money will, anyway, go into private pockets. But if we want to promote inclusive democracy, the state must pay for it. The parties that produce our leaders cannot be beholden to the financial might of a few individuals. State sponsored parties will also call for tighter governmental auditing of party accounts – a requirement stipulated in Article 55 (14) of the 1992 Constitution.

Anybody caught trying to convince a voter to vote for a particular person by offering money or a gift should be liable to prosecution. The EC seems powerless to enforce its own rules. It has never made an example of anybody.

There is a human interest element to the Amewu saga. He started his political life as a young man in the NDC. When he lost the parliamentary primaries, he ditched the NDC and went to their rivals. This is his first elected victory apart from the ones he won within the regional party hierarchy where the competition is less stiff. Even so, celebrations of his present victory, won at such great cost, have been muted. But he has now arranged a series of victory celebrations around the constituency where he is paying for the people to eat, drink and make merry on his account.

Amewu’s detractors do not say nice things about him and decry in particular his arrogance and greed. A poor public speaker with little charisma, he paints a dour figure on the campaign trail projecting an image of pretentious humility. He has claimed that if he had only been bent on entering Parliament, he would have stood in a constituency in Accra where he could have easily won. He insists that it is his desire to do something for his people that is driving him to stand in his home constituency.

He is a man desirous of the love and acknowledgment of the people who have rejected him on all previous occasions. He could only now win some of them over by bribing them. He has a morbid craving to be hailed by the people and clearly savours the moments when the village women dance to his glory! Will this love stand the test of time? Will it now be payback time for him? He is known to be a very vindictive man who never lets his enemies out of his sight. He has a posse of well-paid thugs ready to do his will.

Some of his supporters argued that, despite his odious nature, people should hold their noses and vote for him since he brings home some of the pork. Moreover, he is their son and, as the elders say, a child does not defecate on the parent’s thighs and a knife is used to slice the skin off. Many of his projects in the area, some ill-planned, are being financed from his pocket. He had threatened to cut some off if the vote did not go his way.

Political office offers enormous benefits to the holders increasing the gap between the haves and the have-nots in our unequal society. But the political space is increasingly being occupied by the few rich. The result of money controlling our electoral process is increase in corruption as the spenders try to recoup their expenditures. Honest citizens are being squeezed out in a field that is dominated by rogue actors. It has now become very difficult for true reformers to win the presidency.

We cannot curb corruption in our society if we continue to allow politicians to bribe their way into elective office. Our democracy is much the poorer for it.