Christmas is of Two Aspects; The Seen and the Unseen - Claims Dr. Brown 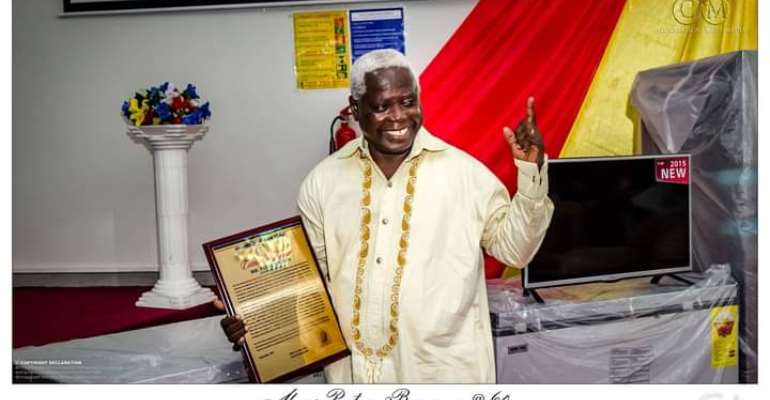 Cape Coast 27th December, 2020, A member of the Rosicrucian Fellowship Cape Coast Centre, Dr. Peter Brown has asserted that there are two dimensions of the celebration of Christmas, thus "The Seen and the unseen".

The seen according to him "Is where we kill and eat chicken, you see masquerades parading through town and you see people dancing to all manner of music being played". "There is also the unseen, and the that is spiritual aspect of Christmas." Dr. Brown Averred.

Dr. Brown reiterated the fact that, man is made of two main parts, thus, the seen and unseen aspects of man. He explained further that, the seen is what we all see and can touch and feel as humans but the unseen has something to do with our spiritual life. "Man has two bodies; the seen and the Unseen".

In addition Dr. Brown said, Christ is referred to as the good shepherded, but the question is: where are His flock of sheep? That is proverbial and which we must all try to decipher.

Dovetailing into the Christmas discussion, he said when earth revolves around the sun and it gets to September towards December, a certain spiritual light is seen shining towards the earth and by 24th of December, it reaches the earth and dissolves into the centre of the earth.

He further indicated that, when this happens, all those who have prepared spiritually, shall receive spiritual enlightenment and their spiritual sight is opened. "Once this happens, spiritual beings come and pick such persons and take them round the earth to teach them things about the earth".

But was quick to add that "They don't come and pick such people with their physical bodies, but the spiritual one which accompanies the physical is what they deal with".

According to Dr. Brown, the earth is similar to the makeup of an onion. "The earth is made up of nine (9) strata and it is this divisions that those who attend lodge normally refer to as 1st degree, 2nd degree up the 9th degree" he posited.

But, all these 9 strata are made up with love and proper spirituality and when that is achieved, then on the 24th night of December, when it is said that, the Christ is born in Bethlehem, that Bethlehem is within you. This can only be achieved through conscious effort by living a life of purity and good deeds with proper spiritual preparations.

He revealed one secret that, every month, God in his infinite wisdom deposits seed which helps us build our spiritual sight into our sacrum. "When this life force isn't abused then by the end of the year, one would have acquired 12 of these". "If this is repeated in 2 years, then one would have had 24 and 36 in three years".

He added that with the 36 of such seeds saved in your sacrum plus the additional three which shall be received from the sun, is what builds the spiritual sight of men.

For a man to build his Spirituality, such a person should be someone who doesn't indulge in too much sexual activity whether a man or woman.

Brown continued that, if this is properly done, the life force that has been stored in the sacrum would be begin to rise through the spinal cord into the head of man. He explained, at that point, it ignites a connection between the pituitary and pineal glands to unite. "When that happens, one begins to see things of the spirit".

Dr. Brown made all these revelations while contributing to a panel discussion on GBC Radio Central's 'About Life' programme hosted by D.C. Kwame Kwakye today Sunday, 27th of December, 2020 on the topic "Does Christmas Have a Pagan Origin?".

He took the opportunity to advise all persons to be careful about their sexual lives and to achieve all that has been described above, is to live a good life through out the whole year.

Living the life should and must be a daily activity and when all is perfectly done well, on the 24th of December of every year, when the sun's aura merges with that of the earth, the Christ shall be born within you and you shall be feel it yourself.