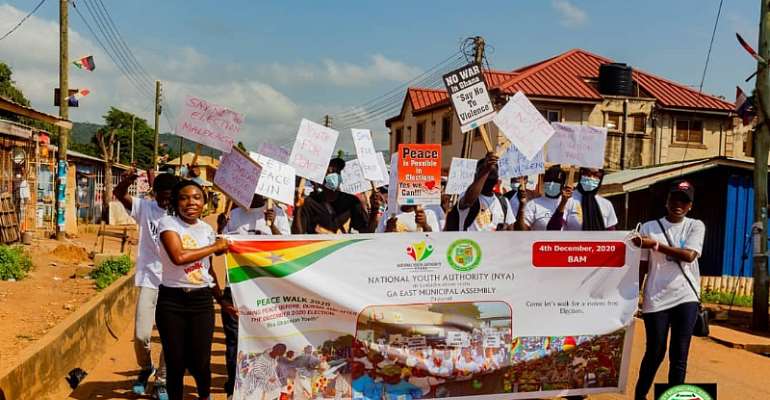 Scores of Youth in Abokobi, Sesemi, Akporman and Boi, and other parts of the Municipality, on Friday, 4th December 2020, embarked on a peace walk to create awareness on the need for a peaceful conduct of the 7th December Polls.

The walk, amidst brass band rendition of some popular patriotic, gospel, and other times, was organized by the Ga East Municipal Directorate of the National Youth Authority (NYA).

Youths from various parts of the Municipality join their counterparts in Abokobi and surrounding communities for the exercise, with Hon. Assembly Members also participating in the peace walk.

The participants displayed placards with inscriptions such as "Ghana is bigger than any Political Party", "Politics is for peace", "Say no to election malpractices", and "Peace brings us together", among others.

They whistle-stopped along the streets to interact with residents and educate them on the "dos and don'ts" of elections and the need to vote peacefully and accept the outcome of the elections for the unity and development of the nation.

The peace campaigners later converged at the Ga East Municipal Main Office where they were refreshed and educated further on the "dos and don'ts" of the polls.

The Municipal Director of the NYA, Mrs. Josephine Ampah, was delighted about the exercise and noted that it was the civic responsibility of all to uphold the peace and unity of the nation by voting for their choice of persons to lead the country in 2021.

She encouraged the youth to desist from practices that will mare the peaceful conduct of the election and advised them to stay away from any potential trouble spot in their own interest and the nation at large.