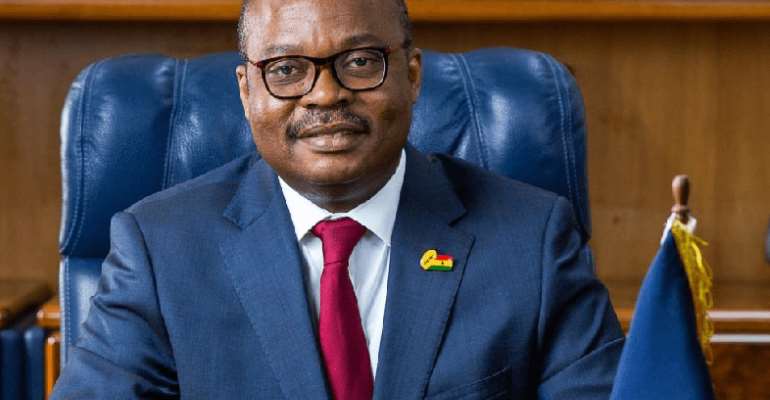 The Alliance for Social Equity and Public Accountability (ASEPA) has given the governor of the Bank of Ghana (BoG), Dr. Ernest Addison a 48-hour ultimatum to retrieve every single penny of the GH¢52 billion tax revenue missing from its accounts.

In an audit report released by US-based Journalist Kelvin Taylor, an alleged amount of GH¢52 billion of tax revenue is said to have been moved from the transit account of the BoG to unknown destination accounts.

According to the report, the IRS direct transit account has seen over 1,180 transactions on it, moving a total of about GHC17.5billion to unknown destination accounts.

Among many other discoveries, the VAT Indirect Transit Account also reported a total of about 1,794 transactions had about GHC18.9 billion being moved into an unknown account.

While raising serious concerns about the findings in the audit report, ASEPA has at a press conference today demanded details of all transactions that led to the missing of the gargantuan sum of money.

“We demand that the bank of Ghana immediately publish the daily clearance of Ghana Commercial bank from 2017-2020.

“The clearance must in detail highlight the various destinations of the transactions that moved over GHC52billion of Ghanaian taxpayers money, and the purpose of the transactions,” the Executive Director of ASEPA, Mensah Thompson said at a press conference on Tuesday.

“The Governor must retrieve every single penny of the GHC52billion within 48 hours or face the wrath of the young people of this Country.

“We are also Demanding the immediate publications of the owners of the accounts in which the tax revenues of poor Ghanaians was illegally transferred into,” Mensah Thompson added.

Read the full speech read by the ASEPA boss below:
PRESS STATEMENT BY ASEPA ON THE MISSING GHC52BILLION TAX REVENUE

Ladies and Gentlemen of the Media, thank you very for honoring our invitation at such short notice.

As a Public Accountability CSO, you the media are our core partners in the fight against corruption, abuse of Power and impunity!

Today we have called you here, ask critical questions about some GH52billion of tax revenue that has gone missing in the GCB transit accounts!

Ladies and Gentlemen, GCB was tasked by the Ministry of Finance to assist GRA in revenue collections.

When these tax revenues are collected by GCB, they straight into a transit account at GCB, this transit account has NO signatories because no one expected to withdraw money from that account.

The transit account is to facilitate the smooth, transfer of these tax revenue to its designated account at the Bank of Ghana.

Ladies and Gentlemen, in audit report, released by US based Journalist, Kelvin Taylor, the report is reporting about GHC52BILLION of tax revenue, moved from the transit account to unknown destination accounts.

For example; in the audit report,
The IRS direct transit account, reported over 1,180 transactions on it, moving a total of about GHC17.5billion to unknown destination accounts.

The rest are VAT communication service transit account, which moved over GHC 107million with 262 transactions.

The CEPs GCNet Revenue transit account was also not left out, also moving about GHC10.8billion into unknown accounts over 1,026 transactions.

The EPI customs account also recorded a total withdrawal of about GHC1.2billion with over 32,120 transactions.

CEPS Petroleum tax transit account also recorded a total of GHC3.8billion moved to an illegal destination with over 830 transactions.

In total GHC52,537,175,778.13 billion was illegal moved from the transit account to an unknown destination.

Now we know for a fact, the in banking sector, money cannot move from a known source to an unknown destination.

The daily clearance of all commercial banks reported to the bank of Ghana contains records of all transactions including the source accounts and destinations accounts name and details.

And so the bank of Ghana have the details of these transactions in their daily clearances.

We demand that the bank of Ghana immediately publish the daily clearance of Ghana Commercial bank from 2017-2020.

2. Regulation 12 of the Financial Administration Regulation,FAR(2004) donot allow accounts such as the transit accounts to be touched by anyone.

Yet the Bank of Ghana sat down for over 37,212 different transactions to be performed on a trusted account without anyone caution to the GCB.

These illegal transactions, were reported daily to the Bank of Ghana through the daily clearances and yet the Bank of Ghana did nothing to stop the taxes of the ordinary people from being stolen by these criminals.

These is absolutely no doubt that the Governor of the Central Bank and his team are directly involved in these criminal act of stealing the taxes of the good people of Ghana.

We therefore give the Governor of the Central Bank, a 48 hour ultimatum to retrieve every single penny that was moved the GCB transit accounts to “known” accounts.

The Governor must retrieve every single penny of the GHC52billion within 48 hours or face the wrath of the young people of this Country.

We are also Demanding the immediate publications of the owners of the accounts in which the tax revenues of poor Ghanaians was illegal transferred into.

We need to know all persons culpable in this criminal act against the State and subsequent prosecution of these criminals is the least of our demands.

The leadership of the GCB must also be investigated, and who has a hand in this crime be prosecuted!