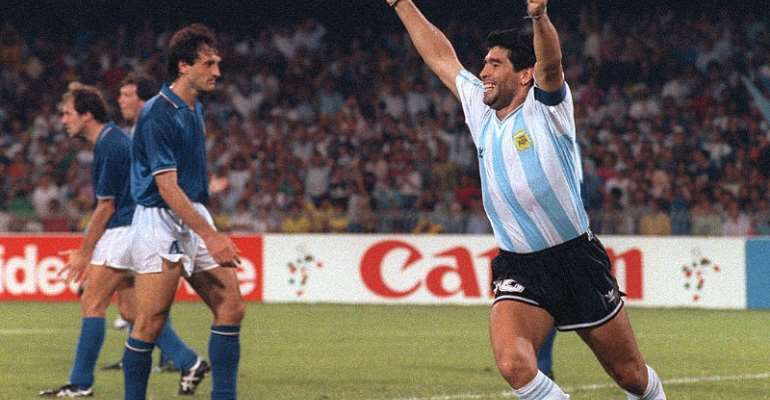 The Argentine government has announced three days of national mourning following the death on Wednesday of Diego Maradona at the age of 60.

The former skipper of the national football team died after a heart attack at his home in the suburbs of Buenos Aires, his spokesman said.

"Certainly, one day we'll kick a ball together in the sky above," said the Brazilian football legend Pelé with whom he was often compared.

Born in the Buenos Aires working class suburb of Lanus on 30 October, 1960, Diego Armando Maradona was the fifth of eight children.

His mother, Dalma - known to his fans as "Dona Tota" - saw a star reflected on the floor in the church where her son was baptised and imagined a bright future as an accountant.

But he was to eventually glitter in another field. After being discovered in street kickabouts by the scout for the first division club Argentinos Juniors, Maradona made his league debut at 15.

Two years later, he just missed out on selection for the Argentina squad that would go on to claim the 1978 World Cup. In the 1982 tournament in Spain, he failed to inspire the defending champions.

In 1986, his legend was made. In the quarter-final against England at the Azteca Stadium in Mexico City, he bagged a brace. One was notorious. The other glorious.

In what was labelled "the hand of God", he punched the ball over the head of the England goalkeeper Peter Shilton. His second was a 50 yard slalom past half a dozen defenders. It has been labelled one of the greatest goals.

England striker, Gary Lineker, who featured in the match, was among former players to pay tribute.

Napoli, who Maradona, inspired to two Serie A titles as well as the Coppa Italia and Uefa Cup, issued a simple tweet in English.