40 Most Inspirational Female Leaders In Ghana 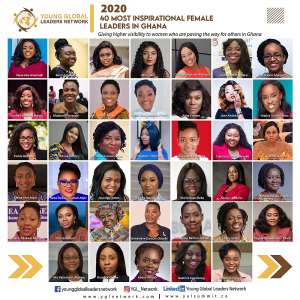 The 2020 40 Most Inspirational Female Leaders in Ghana list celebrates 40 inspirational women who are future leaders, business leaders or leaders in an organization or political leaders and are making a tremendous contribution to gender diversity, women, and youth empowerment in Ghana. These individuals serve as role models to the youth.

The network seeks to be the world’s leading organization that trains, mentors, and prepares young leaders for diplomacy, politics, business leadership and entrepreneurship.

The committee responsible for this initiative set for themselves criteria and received in-house nominations from members and management of the organization. Nominees were scrutinized and the below list made it to the final 40.

Gloria had a brief stint with the Deloitte UK office where she trained in the provision of Immigrations services. She has assisted several multinational and large local companies in resolving compliance issues with a number of regulatory authorities in Ghana including the Ghana Revenue Authority, the Ghana Immigration Service, Ghana Free Zones Authority, and the Social Security and National Insurance Trust.

She is married to Mr. Jonathan Boye-Doku and blessed with three wonderful children.

She previously served as Managing Director of Barclays Bank Ghana for 5 years where she built a high performing and more diverse leadership team. Prior to that, she was the Finance Director of Barclays Bank Ghana. Under her strong leadership, the performance of the bank consistently exceeded expectations, culminating in its position as the most profitable bank in Ghana.

She holds an MBA (Finance) and a BSc in Business Administration (Accounting Option, First Class Honours), both from the University of Ghana Business School. She is a certified professional accountant and a member of the Institute of Chartered Accountants, Ghana. Patience is also an honorary member of the Ghana Institute of Directors.

She sits on other boards, namely, the Apex board of the Jospong Group of Companies and is also on the Advisory Committee of the Ghana Infrastructure and Investment Fund.

She is a founding member of both the Executive Women Network and the International Women’s Forum, Ghana.

Patience Akyianu was named among the 100 Most Reputable Africans 2018, by the Reputation Poll, together with renowned leaders like Rwanda’s Paul Kagame, South Africa’s Cyril Ramaphosa, Ghana’s Pastor Mensah-Otabil and Strive Masiyiwa. Her other many awards and accolades include: Nobles International Award for integrity (2013), Africa Female Economic Champion-Banking (Centre for Economic & Leadership Development (CELD)-2014), Second Most Reputable Banking sector CEO in Ghana – 2017, Best Female CEO in Ghana 2018.

She is currently the Chief Executive Officer of Baobab Advisors, a financial advisory services company she founded in 2011. Prior to that, she headed the Ghana office of Renaissance Capital; a leading investment bank in Moscow.

She is the recently appointed Deputy Managing Director of the Ghana Stock exchange.

She assumed her current role as General Manager for MGTV in 2017 and doubled as the Head of MG Digital for well over a year as well as GM for MG Radio for a period. An ardent learner, she has toured almost all major news makers in the US and United Kingdo ― BBC, CNN, VOA, Sky TV, Citizen TV and Kiss TV in Kenya, in her quest to bring on board unmatched experience to outclass her competitors.

Beatrice is Deutsche Welle trained and has a bachelor’s and master’s Degrees from the GIMPA Business School.