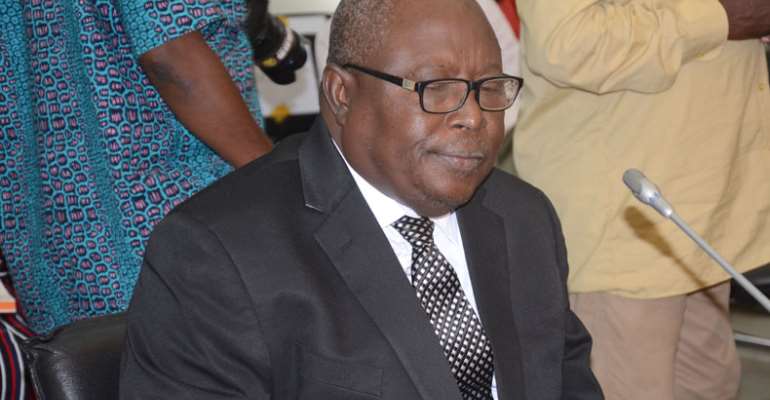 Those who had extra eyes saw the details of this quote as a curse on all those who betrayed John Mahama; those who accused him falsely including Martin Amidu; those who vilified and questioned his competence and all those who had voices and platforms to speak up, yet chose to stay mute and urged the political vampires on.

Some few hours ago, the Special Prosecutor, Mr Martin Alimisi K. Amidu forwarded his resignation letter to President Akufo-Addo, a man he has defended and played a pivotal role to ensure he won the 2016 general elections. Amongst the reasons cited, Mr Amidu expressed his utmost disappointment in the President for not keeping his own words to ensure the Former’s office operated independently and without hindrances from government and its agencies.

In the beginning, Amidu worshiped Nana Addo; he joined many gullible voices to chant for change. In fact, Amidu and other Northern voices including that of Dr Bawumia, Mananseh, Bugri Naabu, Otiko Djaba, Mustapha Hameed, Samuel Abu Jinapor and others, formed a layer within the rectangular attack structure designed by Akuffo-Addo and his cabal. In most cases, the first name calling and attacks came from these Northern cabal. This was then amplified, repeated and given mileage by the biased and bought media. So, in this agenda, the media formed the second layer of this attack structure.

The clergy and some CSOs formed the third layer after the biased media. They mount their pulpits on Fridays and Sundays, cajoled their unsuspecting congregants into believing that John Mahama was the devil’s incarnate. They used the name of the Lord in vain. All these to get Mahama out of power. The NPP propagandists led by their Flag bearer and current President, will then feed on what the Northern cabal will throw out, amplified by the media and reechoed by the clergy and CSOs. This plan indeed worked perfectly.

In the end, Mahama was vilified, denigrated, insulted, attacked, accused and finally overthrow with a compromised electoral process. In his last epistle released on the 5th of December, 2016, Mr Martin Amidu accused John Mahama of being in bed with Woyome because the former had a cut on the GHC 51m paid to the latter. He went further to call on Ghanaians to vote “corrupt” Mahama out and vote for his newly found Messiah, Akufo-Addo, so that together with the latter, they will chase Woyome, arrest him, take the money and then send him to Nsawam without even trial. Woyome is walking free and comfortably than ever before.

Indeed, Amidu allowed his temperament, anger and hatred against John Mahama to be exploited by The Vindictive One (Akufo-Addo). He was first promised a job as an “Independent Special Prosecutor”. Before he was appointed, President Akufo-Addo called and told him the “Independent” part of his office will be detached, although he, the President was going to ensure he executed his mandate independently, as conspicuously captured in the Office of the Special Prosecutor Act, 2017 (Act 959).

In office, Amidu was first reminded by the Attorney General and Minister of Justice that his office (SP Office) was a subset of the AG’s office and that he’s just like any of the state prosecutors, only that he has a special duty to prosecute corruption related cases. Still in office, the AG’s office denied him access to vital information and documentations to aid his investigations. Still in office, he was denied adequate funding-even when he was allocated GHC 180m and made noise and merry about it, only GHC 28.5m was released for that year.

Amidu should have known from start that he was not appointed into office to work and fight corruption as a self-styled citizen vigilante, but to be tied, chained, silenced and compromised so that Akufo-Addo and his appointees will have a field day to feed indiscriminately on our taxes. “Hate mostly blinds the wise”.

Amidu’s hatred for John Mahama had clouded his senses, so, he found no reason to think again and evaluate his newly found Messiah, Akufo-Addo. It was clear from the beginning that Akuffo-Addo and his family and friends government were not ready to fight corruption but rather was prepared to go every length to fight those who will expose and ready to fight corruption.

Mr Amidu saw all the above yet defended Akufo-Addo at all times even when the signs were written on his forehead. He tried to please the Emperor by absolving him from all blames. In the end, just a small touch on the white shirt of Ken Ofori-Atta and the President and his family won’t let Amidu breath. Even when Amidu still accepted to smuggle a paragraph about Airbus into the Agyapa report, President Akufo-Addo and his cabal of family and friends who benefited from the Agyapa Heist went all out for Amidu.

The Coward Amidu should have stayed and get defeated by John Mahama, but he instead allowed corruption to defeat him first.

Next time you are given the palms of a monkey to feast on, check your own palms first and clear your doubts. The Northern dagger that was used to stab a Northern Brother got blunted and corroded out of use. Time is still our greatest ally.

(A proud Kamara from Laribanga)