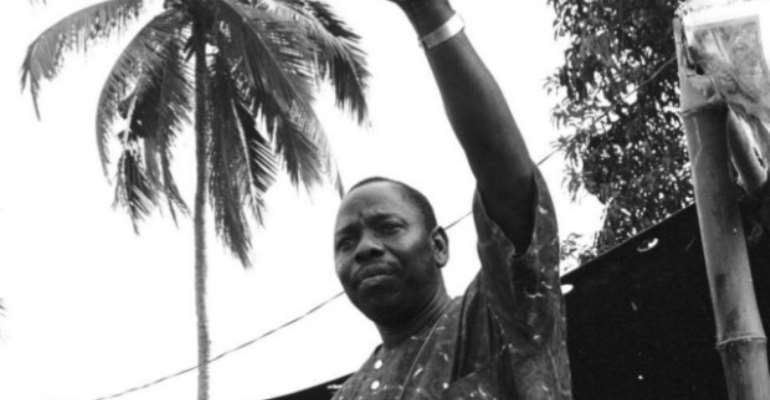 On November 10, 2020, the Ogoni people, in the homeland and in the diaspora, are poised to celebrate the 25th Anniversary of the judicial murder of Ken Saro Wiwa and other Ogoni leaders with renewed calls for Ogoni autonomy. Twenty-five years ago, on November 10, 1995, Gen. Sani Abacha, bolstered by the Justice Ibrahim Auta tribunal and Shell Oil Company, impulsively murdered Ken Saro Wiwa, one of Africa’s finest, and eight other Ogoni leaders for demanding Ogoni political autonomy within Nigeria. Ken Saro Wiwa was an acclaimed writer and Africa’s foremost environmentalist who led the Movement for the Survival of the Ogoni People (MOSOP).

Ogoni was and still is on the verge of extinction because of environmental degradation stemming from Shell Oil Company’s racist double-standard of oil exploration. In the western countries where they operate, the company buries pipelines underground but in Ogoni and the greater Niger Delta they operate without regard for the environment. Pipelines crisscross communities, playgrounds, rivers, and swamps. This modus operandi was unacceptable to Niger Delta communities because oil spills and gas flaring became too common and dangerous, leading to devastating pollution of the land and water. The company also operate without agreement with local or indigenous communities where they operate unlike in the west.

Ogoni produces Bonny Light Crude Oil (BLCO), a low sulfur( between 0.14% and 0.16%) high grade crude oil sought after by American and European refineries, yet the people and communities are exceedingly poor and their land underdeveloped unlike Houston or Corpus Christi, Texas. As of 1991 Ogoni with a population of around 2 million people contributed over $100 billion to the Nigeria economy through oil revenue. Ironically, major infrastructure like universities, healthcare facilities, and electricity are lacking. In comparison, Corpus Christi with a population of 305,215 people according to the 2010 U.S Census Bureau has several universities, well developed seaports, and thousands of corporations.

Against this backdrop, Ken Saro Wiwa and the Movement for the Survival of the Ogoni People (MOSOP) stepped forward presenting Ogoni demands contained in the Ogoni Bill of Rights (OBR) to the Nigeria military government in 1990. Amongst the chief demands were plans for economic development of Ogoni, resources control, and fair representation in all Nigeria institutions. From thence, the Hausa/Fulani cabal saw Ken Saro Wiwa and MOSOP as a national political problem that must be eliminated.

The military and Shell Oil Company incensed that Ogoni demands would hamper oil and gas extraction from the region and fearing the demands would set a dangerous precedent, developed surreptitious plans to exterminate the Ogoni leadership and occupy Ogoni. Shell Oil purchased guns for the Nigerian police and connived with the military to start inter-tribal wars using Ogoni’s neighbors, a rare occurrence, since the regional tribes have lived together peacefully and inter-married for over 500 years.

Rather than negotiate an amicable solution through civil engagement, Gen. Sani Abacha plotted and orchestrated the murder of four Ogoni chiefs, then accused, and arrested Ken Saro Wiwa and MOSOP leadership without investigation. Ken Saro Wiwa and his MOSOP compatriots were executed at the Port Harcourt prison 10 days after a sham judicial trial at the Justice Oputa tribunal. It should be noted that there was no investigation report. The leaders were executed against international outcry in violation of rights to 30 days appeal and even when counsels, Chief Gani Fawhemi (SAN), and Mr. Femi Falana (SAN) had withdrawn representation noting the trial a sham and the court kangaroo. The Commonwealth sanctioned Nigeria for two years for this murder.

The occupation of Ogoni by Maj. Paul Okuntimo, and his assassin squad was another strategy. Maj. Okuntimo unleashed his infamous 214 methods of killing people. Ogoni villages were occupied, ransacked, women raped, youths crushed, and 13 villages leveled. During this period, Nigeria and Shell Oil waged a psychological war leaving the people traumatized, tattered, and in agony. 25 years later, the region and people still have not fully recovered.

Was demand for autonomy through resources control a fair demand by the people of Ogoni? Why has Nigeria not given an honest account of the brutal murder of Ogoni leaders, knowing that it was all a sham? Why are the names of these men not expunged from Nigeria’s status books? If the occupation of Ogoni was against local and international laws, why are Ogoni villages not rebuilt and reparation paid to displaced Ogoni, and why are Ogoni villages occupied to date by strangers particularly in Oyigbo?

What other communities on earth permits a corporation to import arms, and maintain police like Shell Oil does in Nigeria? Why is Shell Oil Company not investigated by subsequent Nigerian governments despite monumental evidence presented by Ogonis abroad to courts in Britain, the Netherland, and the United States? And why is demand for resources control to enhance Ogoni development and replicate cities like Dubai, Corpus Christi, or Houston criminalized?

The word autonomy may have rattled Nigeria 25 years ago, but in this era of rare awakening and after 60 years of missed opportunities and hollowness, Nigeria need to be honest with itself and restructure. Autonomy is not a taboo and after dissecting the question of autonomy in synchronism with operational ethos in the west, Nigeria can take a clue from Spain, China, India, Canada, and other nations that operate autonomous states, regions, territories, and cities and are still united.

On this 25th anniversary of the slaying of Ogoni leaders, there are renewing calls for the convocation of a sovereign national conference, wherein Ogoni would be granted autonomy so it could control its resources to enhance its development, growth, security, and thereafter preserve its cultural identity and heritage. The sooner Nigeria heeds the call the better.

KorneBari Nwike is an Environmentalist & International Human Rights Advocate, President of the U.S. based Center for Accountability, Transparency, and Human Development (CATHUD), and CEO of Kalez Brands LLC