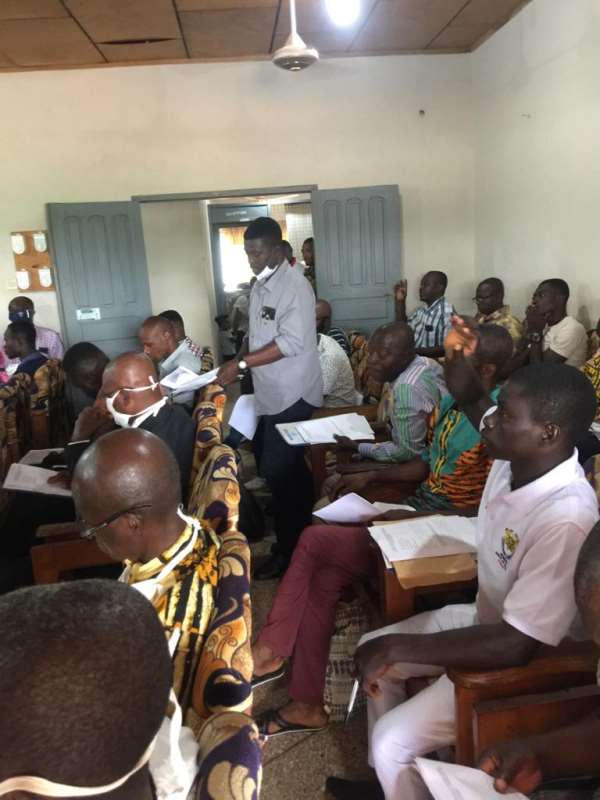 District Chief Executive of Dormaa East, Hon. Emmanuel Kofi Agyeman has appealed to Unit Committees, Area Councils as well as Assembly members to lend a helping hand to the Dormaa East District Assembly in generating and collecting property rate and all other related tax revenue in the District.

He added that an improved revenue of the District would remarkably improve development and ensure the welfare of the Assembly members as well.

The DCE made the call at the Second General Assembly Meeting on Friday, October 30, 2020, in the Assembly Hall.

The appeal became necessary following agitation by the Assembly members for an immediate increment in their sitting allowance while discussions of the Executive Committee Report was ongoing.

On page two of the Executive Committee Report, was a captured recommendation for the increment of members sitting allowance from fifty Ghana Cedis (GHC50) to hundred Ghana Cedis (GHC100) with effect from the next year 2021.

However, during the discussions, members requested the approval of an immediate 100 percent increment, making the amount one hundred and fifty Ghana Cedis (Ghs 150.00) instead of the recommended hundred Ghana Cedis (Ghs 100.00).

The District Chief Executive in an appeal, pleaded with Members to consider the 50 percent increment for now and innovatively use their position and office to efficiently support the Assembly in mobilizing enough revenue since allowances paid to them, are usually taken from the internally Generated Funds (IGF) and an improved IGF, will go a long way to make life better for them as well as their communities.

He also explained, they should encourage and educate the community members on the need to pay their tolls as well as assist in identifying potential properties in the communities which can fetch some property rates and other additional tax revenues for the District.

Nonetheless, he commended few Assembly Members who are doing very well with regard to revenue mobilization, saying that the monies coming from such areas would be dedicated to developing those communities.

Also recommended in the Executive Committee Report, was for the Assembly to acquire a Revenue DataBase Software, to track the inflow of revenue to the assembly to help sustain revenue generation and an improved IGF.

Another recommendation was made for the cancellation of two projects under Education in the 2021 composite budget to enable the construction of an Emergency unit at Dormaa East District hospital.

The discussions also covered the need for authorization in siting structures in the District and the need to also meter out punishment to officers who do not do their work well as well as developers who flout the law to site unapproved structures.

Hon. Matthew Kyeremeh an appointee member of the house, who acted as the Presiding Member for the meeting called on the house to continue in their education on COVID-19, since the disease has not utterly left but on the escalation in many places of the country and outside the country.

He cautioned that any form of carelessness can worsen the situation.