France on edge as man linked to Nice attacker detained 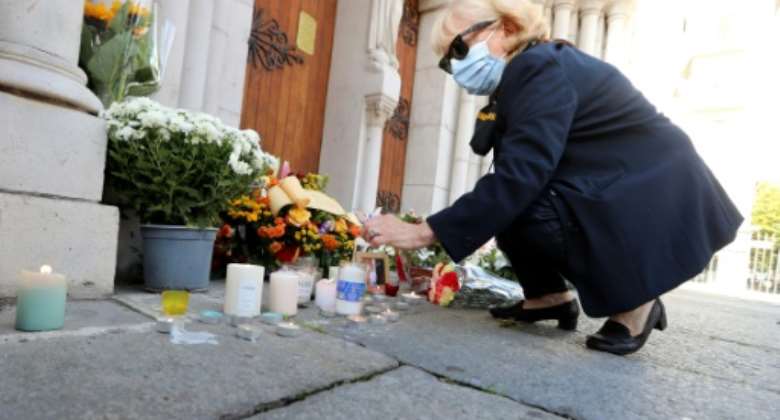 A woman lights a candle outside the Notre-Dame basilica in Nice after Thursday's attack. By Valery HACHE (AFP)

French police have detained a man believed to have been in contact with the jihadist knifeman who brutally killed three people at a church in Nice, judicial sources said Friday, with security forces on high alert for other attacks ahead of a key Catholic holiday.

The 47-year-old was taken into custody late Thursday after the killings at Nice's Notre-Dame basilica by a 21-year-old Tunisian who arrived in France on October 9.

"He wasn't on any of our security watchlists, either French or European," Interior Minister Gerald Darmanin said of the attacker, reiterating that France was "at war with Islamist extremism... an enemy that is both internal and external".

"And when you're at war, you have to understand that unfortunately, there have been and there will be other incidents like this," he told RTL radio.

The attacker, identified as Brahim Aouissaoui, is in hospital after being shot several times by police.

President Emmanuel Macron, who was to hold a crisis meeting with top ministers Friday, has already stepped up military patrols at churches and other sites ahead of All Saints' Day on Sunday.

Many Catholic families mark the day with visits to cemeteries, which will remain open for visits despite a new coronavirus lockdown that took effect Friday.

The Nice attack came as fears of Islamist violence were already running high, just two weeks after a French teacher was beheaded in a street near his school in a Paris suburb.

The teacher, Samuel Paty, angered some parents by showing cartoons mocking the Prophet Mohammed to students as part of a lesson on free speech.

The warning came after a media service called Thabat, which the interior ministry note said was "linked to Al-Qaeda," called for retaliation against France, including the publication of the Mohammed cartoons by the satirical weekly Charlie Hebdo.

The attacker in Nice had a copy of the Koran, two phones and three knives when he entered the church in the centre of the Mediterranean city at around 8:30 am, according to France's anti-terror prosecutor Jean-Francois Ricard.

The attacker in Nice, identified as Brahim Aouissaoui, had a copy of the Koran, two phones and three knives when he entered the church. By AFPTV teams (AFP)

He slit the throats of a 60-year-old woman and a 55-year-old man who worked at the church, and stabbed a 44-year-old Brazilian woman now residing in France, who managed to flee but later died of her wounds.

Officials said Aouissaoui repeatedly chanted "Allahu Akbar" (God is greatest) as he was taken to the hospital after being shot and wounded by police.

The victims were "targeted for the sole reason that they were present in this church at that moment," Ricard said at a press conference late Thursday.

He said Aouissaoui was in a "life-threatening" condition.

Macron, who travelled to the scene, denounced an "Islamist terrorist attack" and said France would not cave to terror over his vow to combat extremist violence.

Authorities have closed some mosques and shut down two groups accused of fomenting hate and violence in the wake of Paty's killing, which prompted an outpouring of anger that saw thousands of people demonstrate across France last weekend.

More than 250 people have been killed in jihadist attacks on French soil since January 2015, when gunmen massacred 12 people at the offices of Charlie Hebdo over its publishing of Mohammed cartoons.

To mark the start of the trial for 14 suspected accomplices of the attackers, Charlie Hebdo republished the controversial cartoons last month.

Muslims in Indonesia protest against French President Emmanuel Macron for his comments over the Prophet Mohammed caricatures. By Agung Supriyanto (AFP)

But Macron's stance against Islamist extremist violence, and his defence of the Mohammed cartoons, has outraged many Muslims around the world who accuse him of unfairly targeting an entire religion.

French Foreign Minister Jean-Yves Le Drian insisted Thursday that France extended "a message of peace to the Muslim world" Thursday, saying it was a "country of tolerance".

Many French imams have also appealed for calm.

"Today I feel like a Christian, because this touches the very heart of a man or woman," Otmane Aissaoui, imam at the ar-Rahma mosque in Nice, told AFP after the attack Thursday.

N/R: Over 300 suspected criminals arrested in military opera...
4 minutes ago