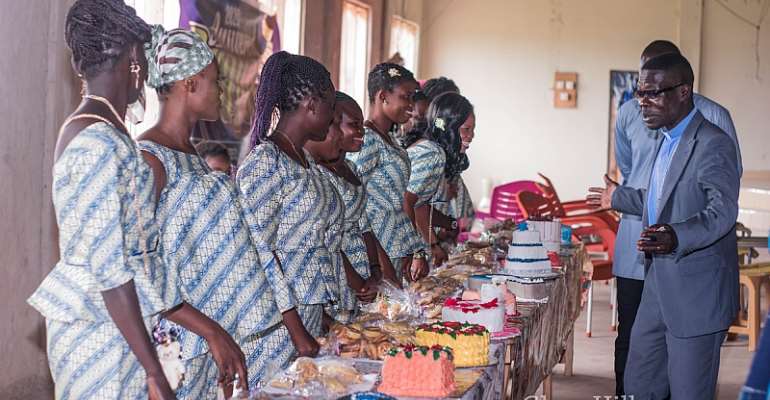 The Gloryhill Women Empowerment Foundation (GWEF) has held its 2nd graduation ceremony for ten (10) beneficiaries who successfully completed their 6 months training in Kete-Krachi in the Krachi West District of the Oti region.

At the colourful heavily attended event held on Tuesday 29th September 2020 in the Global Evangelical Church auditorium in Kete-Krachi, the founder and CEO of the foundation Mrs Gloria Dede Abiwu, in her opening and welcome address outlined the various achievements chalked by the foundation since its inauguration in 2018. These included but not limited to, vocational skills training (like Catering, Hairdressing, Dressmaking and Decoration) for women, symposium on women empowerment, free health advocacy and medical screening, among others. She in addition, rolled out another intervention package for women especially young girls of school-going age. The intervention was to afford young girls the opportunity to take up free hands-on vocational training since schools were not in session due to the pandemic.

Each of the ten (10) beneficiaries was presented with catering accoutrements and undisclosed sums of monies as start-up resources and capital. In addition, five (5) of the previous beneficiaries who had excelled in their various set-ups after sharing their success stories with the foundation, were awarded with ovens as a means of further equipping them and to give them the boost to expand their businesses.

In her submission, the girl child coordinator of the Krachi West district education directorate, Madam Elizabeth Twentor who represented the District Education Director as the Chairperson for the occasion, was full of praise for the Foundation’s CEO whom she touted her accolade as “the second Jesus for the district” for giving such rare opportunities to women in the Krachi West district. She also used to medium to encourage other women to take advantage of the opportunity given by the Foundation so as to emulate the feat attained by the past and present beneficiaries.

The ten (10) graduates which included a nurse, as part of their appreciation, thanked the foundation and assured to put the skills and packages received from the foundation to effective use.

The ceremony was well represented by members of the clergy, the Krachi West Education directorate, distinguished invitees, family members and well-wishers of the graduands.