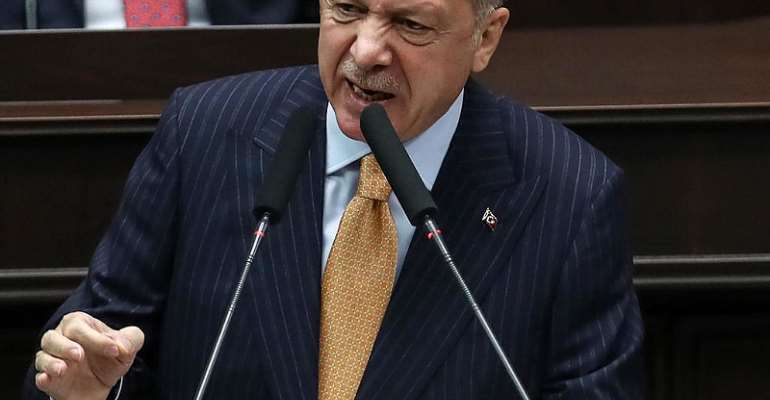 Turkish President Recep Tayyip Erdogan has hit back at a “loathsome” and “Islamophobic” caricature of him that was published Wednesday in the French satirical weekly Charlie Hebdo.

The cartoon, which depicts him half-naked and lifting a woman's niqab, comes amid a major rift between France and the Muslim world that has led to street protests and a boycott of French goods.

Erdogan denounced the drawing as a "despicable attack" committed by "scoundrels”, adding that he refused to even look at it.

"My anger is not due to the vile attack on my person, but to the insults against the Prophet Mohammed," he said in a speech in Ankara. “We know that the target is not my person, but our values.”

A statement from the Turkish presidency written in French threatened “legal and diplomatic" retaliation for the image, which comes amid a breakdown of relations between the leaders of Turkey and France.

Earlier this week Erdogan accused the French President of leading a “hate campaign" against Muslims after Macron warned Islam was in crisis, promising to fight the “Islamist separatism” that he said was taking hold of some French Muslim communities.

Macron's words came during a high-level ceremony to honour French history teacher Samuel Paty, who was beheaded by a religious extremist for showing controversial cartoons of the Prophet Mohammad to his class during a lesson on freedom of expression.

During the ceremony, Macron also said that France would not “renounce cartoons”, adding that Paty "was killed because Islamists want our future".

While Turkey condemned the murder, Erdogan accused Macron of targeting Muslims in a manner similar to the “lynching campaign against the Jews of Europe before World War II”.

The leaders of Germany and Italy were quick to reject what they called "defamatory" and "absolutely unacceptable” comments, expressing their “full solidarity” with Macron.

Meanwhile France has beefed up security at religious sites ahead of this weekend's All Saints holiday amid a heightened terror threat following the teacher's murder.

France's national police warned of online threats from extremists against Christians and moderate French Muslims, including imams who have publicly supported Macron.

A telegram from the Interior Ministry warned of possible knife attacks, or cars ramming into crowds, saying the list of potential targets was “numerous”.

Mahama becoming President again is one of the greatest calam...
23 minutes ago

What Shatta Wale did was childish and stupid — Nii Ayitey An...
31 minutes ago