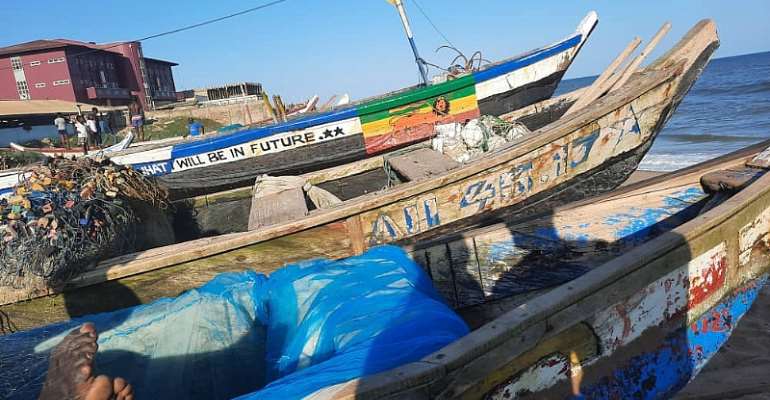 Ghanaian fishers would soon be forced to find alternative or additional livelihood sources to sustain their families as a result of mounting plastic pollution along the shores of the country.

This unfortunate situation cropping up in the Gulf of Guinea is creating panic and depression among many fishers especially those living in Accra.

While the situation lingers, many fishers who reside in Jamestown, Labadi and other suburbs of Accra largely attribute their dwindling daily catch to piles of plastic waste that enters the sea each day.

They say "plastics in the sea is gradually pushing us out of fishing".

The fishers’ assertions were also corroborated by United Nations Development Programme (UNDP) 2019 report which revealed that one million plastic waste end up in the Ghanaian sea each year.

The amount of the plastic pollution that enters the sea has not only become a major concern to many but also contributes to the death of over a million marine animals annually.

These scenarios were confirmed by Nii Abbey and Robert Ayittey when I visited Labadi and James town in August 2020.

According to Nii Abbey, a fisher and a father of two who has been into fishing since childhood; "livelihood is getting tougher each and every day".

Nii Abbey disclosed that unlike in the past where he could harvest more fish and generate a modest income to cater for the need of his family particularly his children; the situation in the past couple of years has been "devastating".

Commenting on the plastic waste heaped along the shore of the sea at the time of the interview, Nii Abbey said "the waste seen at the shore were from the sea which their nets captured; indicating that numerous wastes are still in the belly of the ocean".

The 40-year-old fisherman is worried and frustrated as he is the only source of livelihood to eight other family members.

Although Nii’s education was truncated at a very early stage, gains made from fishing has been beneficial to many relatives around him.

He disclosed: “part of monies gained from fishing has been used to cater for my children’s education and other dependents.”

He fears his dependants especially children will truncate their education also become school drop-outs. He's traumatized as to what will become of his 5, and 8-year-old children and other dependants.

However, looking for another career isn't an option available to Abbey because he has no other skills apart from fishing.

“I will never quit visiting the sea or casting my nets despite the plastic devastation,” he says. “I hope that immediate attention is turned to the sea to safeguard it against the incessant plastic pollution,” he adds.