2020 Polls: Galamsey And The Political Economy; Who Would Galamsey Operators Vote For? 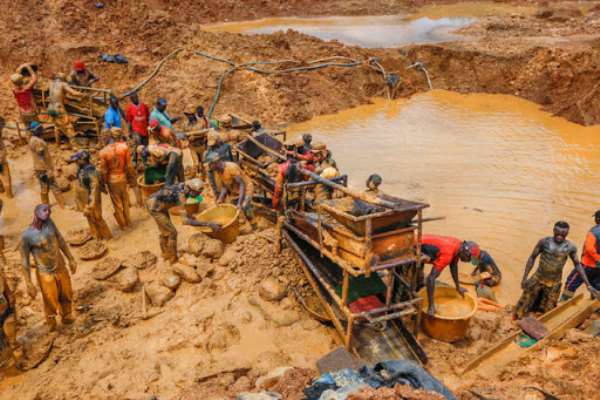 Five months after the 2016 polls, the dominate discussion that sustained a longer radar in the Ghanaian media landscape was the dangers of illegal mining.

Granting the fact that Ghana has had a formalized process for engaging in artisanal and Small – Scale mining on a legal basis since the late 1980, majority of the small -scale miners in the country operated in a manner that was harmful to the immediate environment. Popularly referred to as “Galamsey”, illegal mining has had significant adverse implication in Ghana, ranging from revenue losses to the state because most illegal miners do not pay taxes, to the pollution of important water bodies, among other problems.

Many of you may remember, in March 2017, the Ghana Water Company warned that the spate of water pollution by illegal Small- scale mining operators is approaching significantly alarming status and that the country risks needing to import water for consumption by 2020 unless illegal mining activities are curbed.

This revelation amplified by widespread media campaigns resulted in an unprecedented national consensus against Galamsey promoting action among a wide range of state and non- state actors, including the presidency of the Republic of Ghana, the Judiciary, security services, the Ministry of Lands and Natural Resources and various civil society organizations.

However, whether these renewed efforts have succeeded in eliminating illegal mining depends significantly on an understanding of why the impact of past approaches to redressing this problem has remained disappointing. Why has the fight against Galamsey been unsuccessful thus far?

I trust you will not be surprise to identify that the nature of illegal mining in Ghana is inherently political. This mean that any anti- Galamsey crusade that fails to tackle the political drivers of the problem is unlikely to succeed.

Many blame the growth in illegal mining in Ghana on the cumbersome and time – consuming processes involved in acquiring the necessary licenses for engaging in Small- scale mining on a legal basis, widespread poverty and youth unemployment in rural areas and perceived social injustice resulting mainly from the displacement of indigenous communities by large-scale expatriate mining companies

Eventually, efforts to curb the Galamsey threat have focused on the provision of technocratic solutions, these include; simplifying and decentralizing the Small – scale mining licensing regime, the provision of alternative livelihood opportunities for displaced communities and small -scale miners and the some occasional “military crackdowns|” in which armed security forces raid the sites of miners to arrest them and confiscate their assets.

All efforts have not seen much results because the political drivers of the problem have often been ignored. Our nature of electioneering campaigns, the network of powerful actors engaged in this phenomenon poses a challenge for the effective enforcement of anti-Galamsey laws and ambiguities around land tenure practices.

As electoral competition becomes more intense with December 7 polls in focus, the Galamsey discourse has become increasingly partisan in nature; opposition parties often bolster the position of illegal miners in order to make those in power unpopular and gain partisan political advantage.

Those in power have also abandoned the fight in other to also harvest the votes of these Galamsey operators. These operators are immensely aware of the importance of their votes for incumbent political parties and have often exploited the political vulnerability of those in power during election years.

We will mourn, celebrate and learn from your life – NDC pays...
50 minutes ago