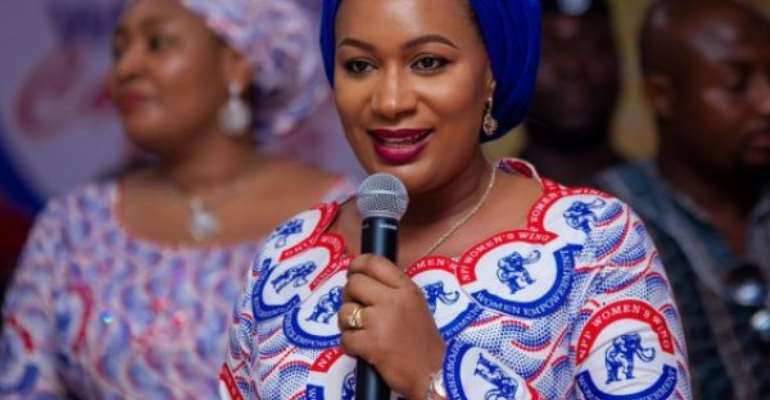 Mrs Samira Bawumia, the wife of Vice President Mohamadu Bawumia has called on the people of the Builsa Constituency to vote massively for President Nana Addo Dankwa Akufo-Addo and Mr James Maurice Abakisi, the Parliamentary Candidate for the Patriotic Party (NPP) in the constituency.

She entreated the people of the area to remember the policies initiated by the NPP government over the years, and vote in favour of the Party in the December 7, 2020 Parliamentary and Presidential elections to enable them retain power.

.“When you go to cast your ballot on December 7, think about yourself, your neighbour, your children, the future, Builsa North, and the development of the Upper East Region.”Mrs Bawumia made the call at a durbar of Chiefs and people of Sandema, the District capital to commence her four-day tour of the Region to canvass for votes for the NPP.

She told the gathering to compare developments in the Region under the National DemocraticCongress (NDC) and the NPP, and vote accordingly, adding “On December 7, we are voting for free education, free textbooks, free uniform and free examination fee.

According to her, under the NPP, “The child will bath, go and sit in the classroom and write exams. We mean free education for the children of Ghana. When that child finishes SHS, by the grace of God, university will also be free.”

Mrs Bawumia said the NDC was given eight years to develop the country, but they failed to deliver, “Today God has blessed this country with President Akufo-Addo and we will give him four more, to do more.”

She also appealed to the electorate to vote for Mr Abakisi to represent them and complement the work of President Akufo-Addo in Parliament, and emphasized that “You need somebody who will go to Accra and bring development, and that person is James Abakisi.”

Madam Tangoba Abayage, the Upper East Regional Minister said the footprints of the NPP in the Constituency were obvious for the electorate to see and vote to retain the Party in government.

According to her, President Akufo-Addo had adopted pragmatic policies to develop the country,and said the Constituents benefited from government's flagship programmes such as the'Planting for Food and Jobs,' the 'One District, One Warehouse,' 'One Village, One Dam' among others.

Akufo-Addo is confused over MMDCEs appointment – Ho Central ...
50 minutes ago