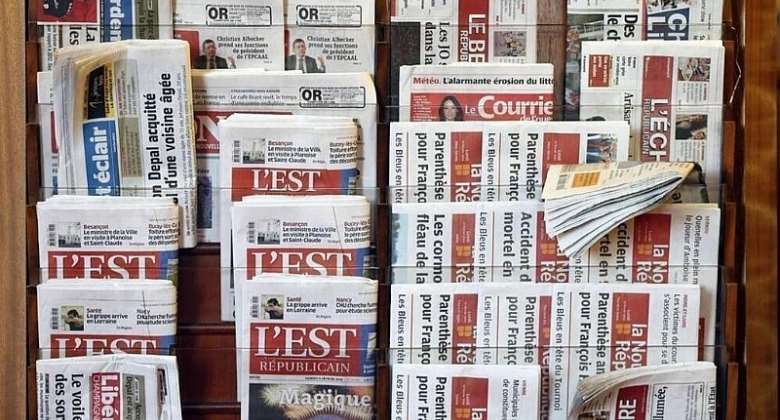 A French regional newspaper has filed a complaint over threats received on social media after publishing cartoons of the Prophet Mohammed on its front page during coverage of the beheading of a teacher near Paris.

The complaint was filed due to comments on a Facebook account of regional newspaper La Nouvelle République, after it republished cartoons of the Prophet Mohammed from satirical magazine Charlie Hebdo on Sunday.

Two days earlier, teacher Samuel Paty was attacked and beheaded in apparent retaliation to a lesson in early October, in which Paty showed the cartoons to 13-year-olds as part of a class on moral and civic education in Conflans-Saint-Honorine, north-west of Paris.

“It was not meant as a provocation, but as our way of saying no more barbarism and of recalling our values,” Christophe Hérigault, editorial director of the Tours-based daily, told AFP.

“After the publication, 99.99 percent of the reactions expressed support or satisfaction, but there were also six threatening posts on social networks,” Hérigault explained. “We decided to press charges as a matter of principle.

“We hold republican and humanistic values and believe in freedom of expression. Our newspaper has always been respectful of the beliefs and spirituality of others.”

Paty's assassination has revived heated debate over publishing cartoons of the Prophet Mohammed, which offend many French Muslims, who make up 10 percent of the French population.

Several Charlie Hebdo cartoonists were killed over Mohammed cartoons at the magazine's office in January 2015. The magazine republished the cartoons in September to coincide with the start of the trial for the attacks.

The president of France's southern Occitanie region said images of Charlie Hebdo cartoons would be projected on the regional council's buildings in Toulouse and Montpellier on Wednesday afternoon, in the hours before an official ceremony for Paty presided by President Emmanuel Macron at the Sorbonne university in Paris.

“I decided that works by cartoonists of Charlie Hebdo, some of whom were killed during the terrorist attack of 7 January 2015, will be projected on council buildings in Toulouse and Montpellier.”

Delga did not explicitly state on Twitter or in a statement whether the projected cartoons would be those of the Prophet Mohammed, or if so, whether other cartoons by the satirical newspaper would be shown as well.

The projection would have a particular significance in Toulouse, eight years after a March 2012 Islamist attack that killed seven people, including soldiers and teachers and students of a Jewish school.

“Eight years after the attack at Toulouse, a terrorist act targeted one of our country's schools for a second time,” Delga said. “If a school was a target, it's because it teaches the foundations of citizenship, the will to build a society despite our differences, the universal values that see wealth in diversity.”