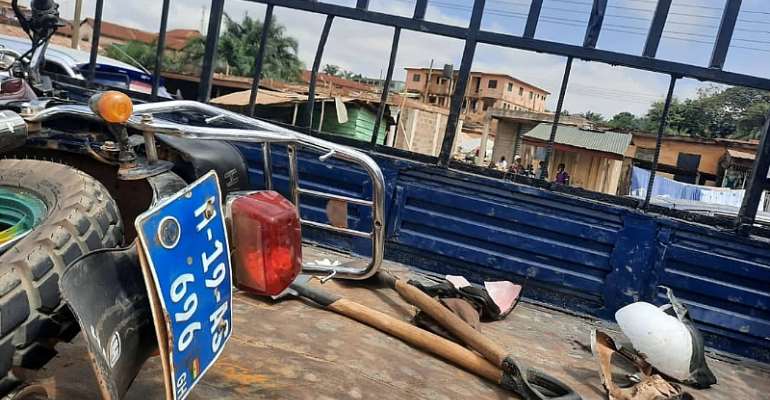 Two men were killed when a vehicle run into a motor bike they were traveling along the Abrepo- Barekese highway in the Kumasi Metropolis of the Ashanti region Wednesday, October 21, 2020.

OTEC News reporter Kwame Agyenim who reported from the scene indicated that a FIAT cargo car with the registration number GT--5539--N clashed with a motor bike with registration number M--11--19 at Abrepo Old Market at about in the early hours of the day.

The two who were pronounced dead few minutes after the accident, according to eye witness were moving from Asuofua to Bantama.

Seagent Anabila a police officer with Suame Motor Transport and Traffic Department (MTTD) who was on duty in the area confirming the incident to OTEC News said the two injured persons were taken to Komfo Anokye Teaching hospital where they were pronounced dead.

The names of the deceased, he noted have not been identified yet.

"It was a horrific moment when one out of the two men on the motorbike was killed instantly after the collision" he said .

He added they the driver of the cargo truck have been taking into police custody by Suame Divisional Police Command for further investigations.