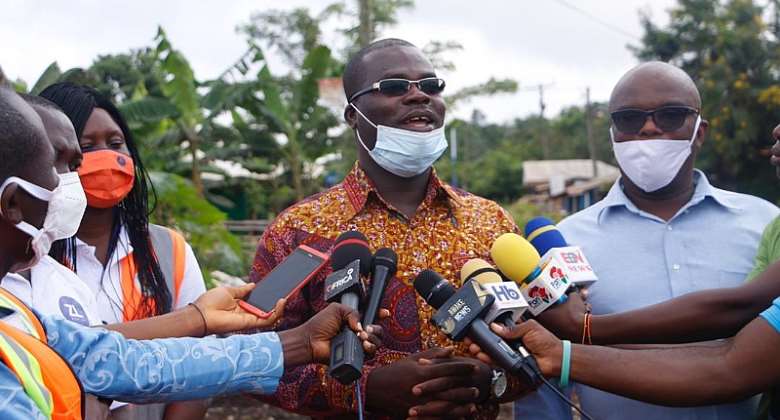 About five communities in the Western North Region have praised the Ministry of Sanitation and Water Resources (MSWR), following the evacuation of their aged dumpsites.

The evacuation of these aged dumpsites, which exercise came off Wednesday, October 21, 2020, was part of the many sanitation initiatives by the Akufo-Addo administration to make Ghana the cleanest nation in Africa. The exercise is being replicated in the remaining fifteen (15) regions.

The first port of call was the Adiembra New Town dumpsite where excavators and garbage trucks were spotted clearing the site.

Speaking to the media, the Municipal Chief Executive (MCE) of Sefwi Wiawso Municipality, Mr Owusu Agyapong, who was highly elated, commended the MSWR for the initiative.

“Now we can breathe a sigh of relief following the clearing of this dumpsite which has become a source of worry for the municipal,” he said.

He revealed that they were expecting about six dumpsites to be evacuated in the area.

He stated that one of his priorities has been ensuring that the environs of the municipal was always clean.

“After the evacuation of the dumpsite, I will ensure that waste containers are stationed here for proper disposal of refuse,” he assured.

Some residents of the community, who spoke to the media, expressed their happiness about the exercise.

“We can now be spared of the foul stench that emanates from these aged dumpsites, especially when it rains,” a resident of Adiembra, Kojo Mensah, noted.

He also applauded the sanitation ministry or its effort in clearing the dumpsite in his community.

Interestingly, a woman whose house was close to the dumpsite out joy donated a bunch of plantain to the assembly.

At the Asaming dumpsite, a resident, Kwame Nkuah, could not help but shower praises upon the ruling New Patriotic Party (NPP). He made it clear that there was no reason to deny the party a second term.

The other dumpsites that were evacuated included Punikrom, Baako, and Asawinso. The exercise is expected to continue today and will ensure that all dumpsites in the region were evacuated.