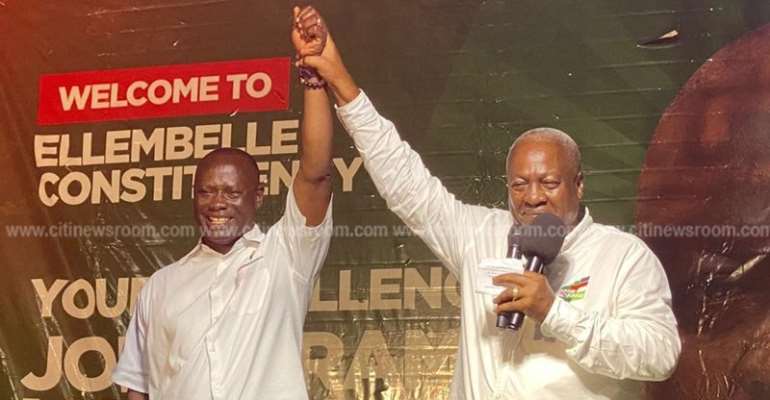 Former President John Dramani Mahama has promised to build an ultra-modern district hospital for Ellembelle should he emerge victorious in the upcoming polls.

He made the promise when he was addressed a mammoth durbar of cocoa farmers at Aiyinase in the Ellembelle District as part of his four-day campaign tour of the Western Region.

“I know that Aiyinase is a major market centre with two days of major trading in a week and since the NDC manifesto demands that we build a modern market at all major markets, we will build a modern market for Aiyinase community on my second coming. Again, we know healthcare facilities are needed in Ellembelle, so I will build a brand-new modern District Hospital for Ellembelle.”

“This is a promise I made in 2016 but couldn't fulfil because we lost power. So I promise you once again that I will build you the Hospital on my second coming and I know NDC will win with your continuous support,” he said.

The NDC flagbearer urged the cheering crowd to vote the hardworking Emmanuel Armah-Kofi Buah as their MP for Ellembelle in the parliamentary poll.

Mahama also reiterated his commitment to building the Atuabo Freeport which has been suspended since the change of government.

Breaking 'the eight' is a must – Yaw Preko charges NPP foots...
4 minutes ago

Free SHS is my idea — King Pharaoh
17 minutes ago