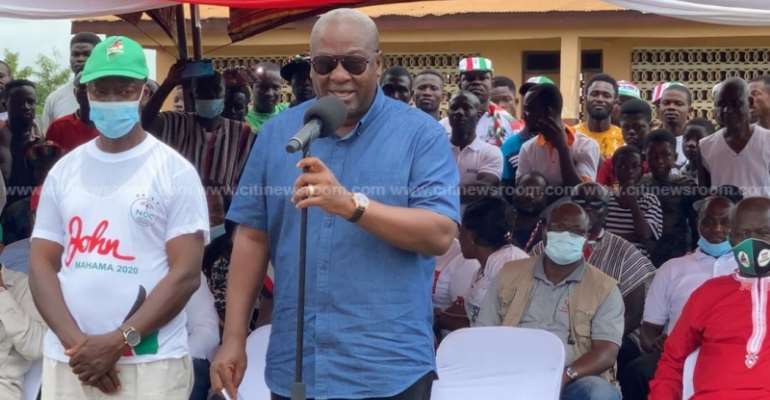 Former President John Dramani Mahama, says he will retrieve all confiscated excavators and concessions belonging to small scale miners reportedly given to New Patriotic Party sympathizers if he wins the 2020 elections.

The flagbearer of the NDC said this when he addressed a durbar of chiefs and people of Agona Amenfi in the Amenfi Central district on day one of his four-day campaign tour of the Western Region.

Former President Mahama said the NPP government has deceived miners and failed at his promise to fix the problems facing small scale miners in the country hence he will address such issues.

“They have sidelined those of us who do not belong to their party and not their relatives from the mining sector to go hungry to allow party faithful and DCEs to rather engage in the mining. This is not right at all. There are individuals whose excavators have been confiscated because they were accused of doing illegal small scale mining. These excavators are sadly later given to NPP supporters who eventually send them back to do same illegal small scale mining.”

“What it simply means is that, some people are seen not to be Ghanaians hence they are treated this way. That's why I have said that when we win the elections, we will look everywhere for the confiscated excavators and return them to their rightful owners. We will also return all confiscated concessions that have been given to NPP party folks to their rightful owners. We will do this because all Ghanaians are humans. We owe this to Ghanaians because NDC is a party that hates selectiveness which Ghana's independence declaration also rejects.”

The NDC flagbearer also assured the cocoa farmers of a return of the cocoa free fertilizer policy which the current administration has cancelled.

John Dramani Mahama who assured to make the free TVET policy a reality is expected to complete touring the Amenfi Central and West constituencies on his first day of the four-day Western Regional tour.

The Chief of Agona Amenfi, Nana Kweku Amoah I, appealed to John Dramani Mahama for better roads in the area when elected as well as keep his promise to return the cocoa free fertilizer policy to support cocoa farmers to improve their yield.