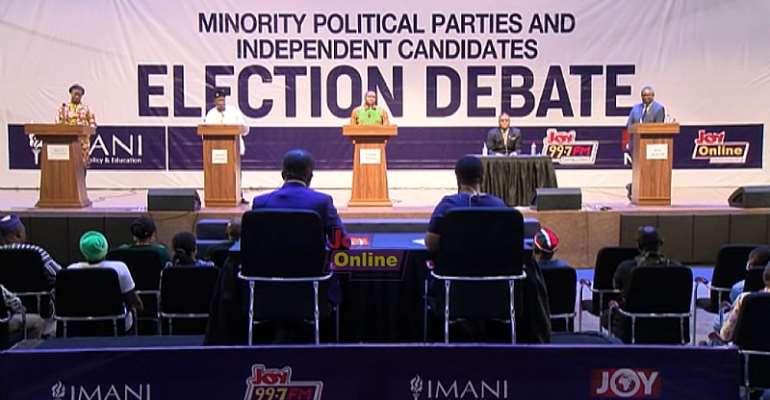 Last Thursday, IMANI in partnership with Multimedia Group Limited held the second Presidential debate ahead of Ghana’s elections on December 7, 2020.

Below are the questions posed to the five presidential candidates.

You can watch the second debate @

1. Law and Order
Ghana is experiencing a disturbing trend of growing insecurity from violent crimes, electoral violence and now secessionist movements. In fact, the PPPs candidate, Madam Dzogbenuku suspended her campaign in the Volta region due to secessionist attacks, a Member of Parliament has been brutally murdered. Mr. Ivor Greenstreet has summed it all up in his own words, ‘growing insecurity and inadequate police intelligence’. Long before we got here, there has been several political attempts by the NDC and NPP, and indeed a law has recently been passed to outlaw these crimes. What do each of you think the law missed and what clear workable strategies would you adopt to prevent further deterioration of law and order? Let us start with Mr. Apasera. You said two days ago that you will deploy helicopters to chase armed robbers. What else would you do to prevent further escalation of violent crimes?

2. Economic Recovery
In building a post-covid economy, Mr. Akpaloo, your LPG party has promised to achieve 12.5% growth when voted into power. The NDC and NPP have been silent on setting growth targets but the NDC has been promising the Ghana Framework for Industrial Revitalization, Support and Transformation (Ghana FIRST) while the NPP promises a second phase 100 billion cedis Ghana CARES programme to revitalize the private sector.  What one major alternative do you propose against the two plans of the NDC and NPP? This question also goes to all candidates.

3. Job Creation
Madam Dzobenuku, your party, the PPP posits that the 2020 election must be based on job creation. The NDC has promised to create 1 million jobs within the next four years while the NPP argues they have created over 2 million jobs over their tenure on the back 1D1F and Planting For Food and Jobs. The LPG has promised to create a 10 billion job fund and pay almost GHc4,800 each year to the unemployed. Mr. Hasan Ayariga’s APC plans to provide monthly unemployment allowances, food benefits, child allowance and maternity allowance. The PNC has promised to do ‘something new by building a youth led economy.’ Starting with the PPP, can each one of you candidates explain why your plans on unemployment are better than what the NDC and NPP have proposed?

4. Debt
One of the pitfalls that many countries have been warned against in the race to bring back the economy from the ravaging effect of Covid-19 is expensive and expansive debt accumulation. Already, Ghana’s debt stock is reaching dizzying heights which economist would like to call unsustainable. Mr. Ayariga for instance has said publicly his strategy would be to levy every Ghanaian GHC 8,000 to pay off our debts in record time. What exactly would each of you do differently to reduce Ghana’s debt that has not been done before?

5. Ease of Doing Business
Ghana has ranked poorly since 2016 on the World Bank's Ease of Doing Business Index, with the 2020 rank being 118th out of 190 economies. Reasons for the weak performances include difficulty in starting business, enforcement of contracts, payment of taxes, trading across borders, dealing with permits and property registration. What two major incentive would your government provide to the private sector to improve the business climate and improve Ghana’s performance on the Index?

6. Corruption
Mr Akpaloo of the LPG has suggested that the NPP & NDC parties have created a system of governance and administration where power is frequently misused for personal gain and where ordinary citizens have difficulty getting work done in government offices without paying bribes. Mr Ayariga,  your manifesto has said you will crush out the bad corruption nuts in our society by building a nation of enduring spirits to resist the temptation of corruption. What is it about corruption that makes it attractive to those who engage in it and what realistic strategies would you adopt to halt corruption in the Ghana’s business environment?

7. Financial Crimes
There have been widespread reports about illicit financial flows with Ghana been blacklisted on the EU radar while a diplomatic row is brewing over Ghana’s Embassy in Belgium over alleged similar transactions. Economic data indicates that Ghana loses over US$3 billion to illicit financial flows from trade with developed countries. The recent FinCEN files leak which cited some Ghanaian entities received less attention from government and the business community. What would you do in your first 100 days to delist Ghana from the infamous list.

8. Natural Resource Management
While mining directly employs a significant number of people, mineral revenues on the other hand are directly deposited in the consolidated fund, whose use is often arbitrary. The NPP government has attempted to maximize the value of mineral royalties through the AGYAPA agreement which has attracted widespread controversy? Do you agree with the NPP on this trajectory? What would you do differently to maximize mining revenues for the Ghanaian people?

9. Mining
There has been increased calls by Ghanaian industry captains, politicians and citizens to increase local participation in critical sectors of our economy. One such sector is mining. Mr. Ayariga, you have said under your leadership no foreign company will engage in mining.  However, the mining industry is a capital intensive one, and even for safe small-scale mining one needs not less than $500,000 dollars. The NDC promises to attract foreign investment into the mining sector so is the NPP hoping to leverage foreign investment in what it calls barter deal at least with bauxite.  Looking at the relatively weak and risk-averse financial sector in Ghana, why would you issue mining license to only Ghanaians? Are you not going to stifle growth in the sector?

10. Energy
Mr. Ayariga you have promised to reduce tariffs for electricity consumption for what you call “the more you consume the less you pay” system for industries and businesses. However, one key challenge the NPP and NDC have struggled to deal with is revenue generation. Besides, high consumption does not necessarily translate to high productivity. How would you link productivity with high power consumption and at the same time solve the legacy issue of low revenue in the energy sector? After Mr. Ayariga, each of you will take turns to answer this question on our energy sector.


11. Flooding
Perennial flooding with its consequent poor sanitary conditions and destruction it leaves behind is competing with Ghana’s quest to be the cleanest country in Africa. Yet, we have created at least 7 bureaucracies including the Sanitation Ministry which draws huge financial resources from the State while pretending to solve the problem. What will be your grand strategy to correct our problem of flooding and poor sanitation?

12. Digital Inclusion
Covid 19 has heightened the need for digitalization in all facets of our lives. The one critical resource for ensuring digital inclusion is Internet data. This will require reforms in our data pricing and regulatory regime. Ghana is considered one of the most expensive countries to obtain license for spectrum such as the 4G technology. How would you ensure that affordable data and internet access is available for every home and business?

13. Housing
Ghana's increasing urban population has resulted in an annual demand of 100,000 housing units to make up for the current 1.7million housing deficit. Political promises and national housing policies have consistently failed to deliver a housing market that meets the needs of the different income earners due to high mortgage interest rates and the increasing construction financing cost and poor land administration system. Do you have a strategy to deal with our housing issues and why should we believe you?

14. Agriculture
Agriculture contributes about 40 percent of export earnings with cocoa alone accounting for more than half of these earnings. What would be your strategies for increasing our export earning potential from the remaining cash crops such as cashew, coffee, pineapple, tomatoes, etc?


15. Political Unity
Many Ghanaians clamor for a viable third force in our democracy. However, since the turn of the 4th republic the cumulative votes gathered by minority political parties has not exceeded thirteen per cent. Indeed, many Ghanaians wonder if you do not know deep down your hearts that you cannot by your individual strengths win the 50+1 % of the votes required to be president. This leads many to one critical question: Why won’t all your parties come together to forge a third force to topple the duopoly we have now. What is standing in your way?

16. Inclusive Development
Many Ghanaians are also citizens of other countries. These dual citizens are treated as fractional citizens and are not allowed to participate freely and equally in the political space. Yet we have no problems allowing dual citizens to play for the Black Stars and even allowing foreigners to control very sensitive industries. What are your plans for empowering dual citizens, many of whom have a lot to offer the country?