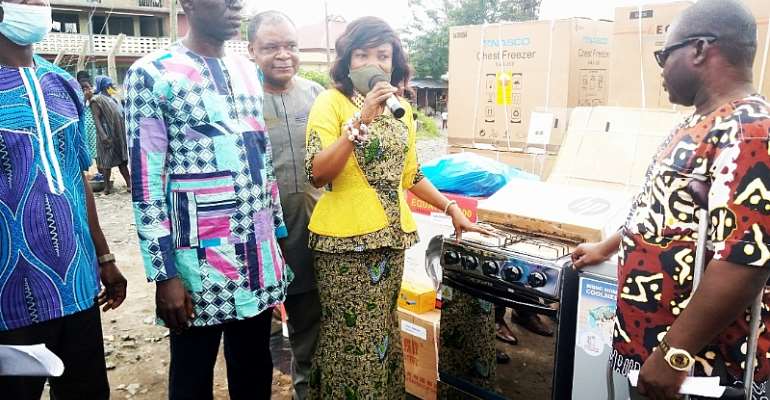 As part of efforts of the government to empower persons with disabilities and also ensure effective utilization of the PWD fund, the Obuasi East District Assembly in the Ashanti Region has disbursed a total of GH₵103,637 to Persons with Disability (PWD) in the District.

This support is to empower them undertake sustainable economic ventures that would sustain their daily lives.

In a colorful event held at the forecourt of the Obuasi East District Assembly on Thursday 15th October, 2020, to presents the items, the District Chief Executive (DCE) for the area, Hon. Faustina Amissah stressed that the selection of beneficiaries was very transparent since they had used the prescribed guidelines and arrived at the decision as to who should benefit out of numerous applications received.

In addition, Twenty (20) White Canes were given to the District Branch of the Ghana Blind Union for distribution to their members.

The DCE urged the beneficiaries to take proper care of the items and invest into productive ventures to help uplift their standards of living and welfare.

She further cautioned the beneficiaries that, the Department of Social Welfare will conduct regular monitoring to ensure that beneficiaries use the support for the purpose for which they were granted the fund.

The District Coordinating Director, Mr. Emmanuel Ntoso, highlighting on the management of the disability fund posited that the fund has a separate account and is deducted from the District Assembly Common Fund.

Mr Ntoso advised the beneficiaries not to sell their items but rather use them for their intended purpose to enhance their business and living standard and also assured those who could not benefit from this tranche that, the Assembly will take care of them very soon.

The District Director, Social Welfare Department, Obuasi East Mr. Godwin Bansah thanked the beneficiaries for their patience and assured those who are on standby that they will be attended to in due course.

Mr. Kwame Ankrah, the Obuasi East Chairman of the Ghana Federation of Disability (GFD) on behalf of the beneficiaries commended the Assembly and government for their continuous support since the creation of the Assembly and pledged to use the items purposefully.

Since the inception of the Obuasi East District Assembly in 2018, the Assembly has provided various forms of support to over 120 People with Disabilities in the District under the able leadership of Hon. Faustina Amissah.

What evil men mean for wickedness God turns it around for go...
14 minutes ago

I saw it coming – Ben Ephson on Koku Anyidoho’s expulsion fr...
28 minutes ago