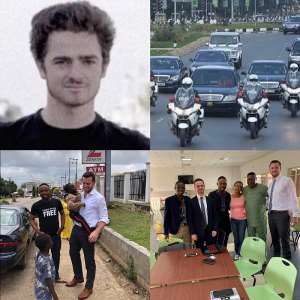 (An ode to the White Saviour and the modern, willing, Black Slave; a nod to ‘A Lack of Self-Respect’; sarcasm; and a general ‘I told [us] so.’)

A lack of self-respect

I feel partially to blame because the thing is, some weeks back I had proposed, in a series of articles titled ‘A Lack of Self-Respect’, this…

[Pop quiz: “Picture yourself in a position of power—governmental power. You find awaiting you a queue, seeking audience with you—business initiatives, proposals, they each carry. In this queue of Ghanaian men and women, sits a lone White man. Now, you have one meeting to spare—you have to rush off to a certain meeting as ‘powerful’ people mostly do. Tell me: who in this long queue of people have you called to your office?”]

In two consecutive articles I posed this question. Now, I cannot help but feel like the events involving Dryden Wilson Tate Brown and friend, the Veep and co., are a direct response to this question.

Because you see, like you, I already knew the answer—me writing; you reading, we both intended that question a rhetoric. Back then I cursed myself for not having specific names to name, examples to set, aside those I had felt, encountered constantly on my trips to governmental offices (past and present)—to this ministry and that ministry and seeing such and such white man and woman pass us, Ghanaians, by—immediately they enter—to see the Honourable(s). And we these, Black folks, these Ghanaians, we weren’t waiting to see the Minister (oh, no. Not yet at all. We whose ancestors were slaves—tofiakwa!—not yet), but to see the secretary—who would then hand us our postponement dates, appointment dates (appointments which eventually almost always never happened.)

We all are Vice President

And by heavens, don’t I just wish this Black second-class citizen, White first-class person/alien dynamic was felt, communicated at those—some plush, some rickety—government buildings only. Don’t we wish! That would be a simpler problem to solve, wouldn’t it? Sadly, grotesquely, this is a national shame (I dare say, Black or African shame. But let us not implicate the rest of Black people or Africans in this—we are the ones who just got caught). And in lieu of ‘shame’ I am tempted to say ‘stupidity’ (because really, that is what it is) but I have found insults to be woefully counterproductive—always failing at reforming. And since reformation is what we seek, let us go with ‘shame’.

And don’t I wish that I could blatantly laugh at the Vice President, and all the people, each, both causalities and casualties in the Dryden-charade. Mr. Vice President, I wish I could—right here and now, right here in DG, right under your nose—laugh at you without scruples. But, admittedly, that is hard, not because of your office, but because I know that that flaw in you that led this comedic white boy into your motorcade lies in me too. Mental slavery with a dash of Stockholm syndrome—that is what secured this comedic White boy a place in that motorcade—and more importantly meetings (the ‘s’ is capital) with top tier government officials and policymakers. Something you and I (Ghanaians with dreams—big dreams, can never, NEVER be given on a silver platter in our very own home.)

[Side note: My anger is visceral. I am hyperventilating—this is a tough pill to swallow. I can’t even make jokes. I need a break before I proceed.]

We get no respect!

Silly, isn’t it?—that as Blacks worldwide are fighting for equality, for respect, for a sense of self-worth—worldwide in White majority nations, Blacks are constantly fighting for these basics of life, we here, Blacks in our Black-majority homes cannot even give our own selves these basic human need. In this huge, compact, actually-bigger-than-you-see-on-world-maps, Black-dense continent called Africa, Black folks are constantly treating one another as second-class humans, and White folks, first-class beings. This is, I dare say, stupid—isn’t it? This puts a huge damper on the Black liberation fight (present and historic), doesn’t it? If we, amongst our own selves, cannot give to one another that value, that sense of self-worth, importance being demanded by our kinsfolk in say, USA, UK, who will?

Elsewhere I called White supremacy the stupidest of all the world’s follies; I need to revise this statement: ‘Black Inferiority/White Superiority’ dynamic created and imposed by Black person(s) takes the crown.

[Warning: Let no White person read this article—close your newspapers, shut off your gadgets, don’t read this—not meant for you.]

I found my example in a funny gentleman, Dryden

Ah! Dryden studied in preparation for the salvation of the continent. This White, green, broke, inexperienced college graduate studied for two or three months (two or three months!—that was all the time he needed to prepare for the salvation of Africa). He and his friend “read every book we could find on ancient, modern, and future cities,” he noted. 3y3 asem ooo. And right there, the expansion of Africa was to begin.

Mr. Brown, he and his friend—in his own words—broke; he, sleeping on his auntie’s couch; his friend, “crashing at his parents’”; with just $47 in their accounts, having won a tournament the amount trudging up to $2047; this very Dryden (and his friend) were to find themselves riding with Ghana’s Vice President in a Presidential Motorcade, heading for Jubilee House where they would sit and brainstorm the elevation of Ghana. Utter nonsense!—and Dryden agreed: “When we got out of the sedan, we were still processing what had just happened…” he bragged on Twitter.

‘Investment’ is a funny word

If you have wondered how the most gruesome act in recent history—the slave trade committed upon us, Blacks, happened, and was sustained for so long, wonder no longer. Each day, look around you and see clearly this fact: that the White man can easily go back into their attics, come back to us with the same tricks (not really tricks, if you know what I mean) and the slave trade would happen again, this time bloodier; this time the Black person not left victims, but stupid.

[Warning: I said no White person read this article! I don’t want you getting ideas.]

During the USA Presidential Debate that took place just this Tuesday, Donald Trump was asked to condemn the acts of White Supremacists in his country. He, like many other times before, dodged this…

[Fact: Daily Guide gives me (and other writers) half a page—I am forced to end here. Didn’t I tell you: we get no respect!

…that doesn’t really apply in this situation, does it?]

Ghana has had lawyers as president, a communication expert; ...
5 minutes ago