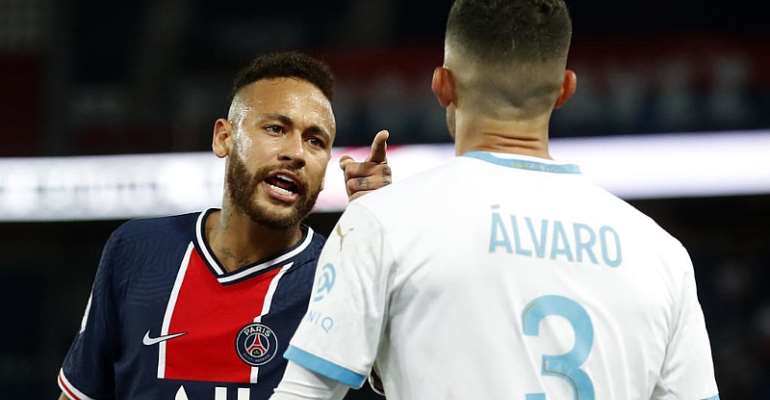 French football's disciplinary watchdogs will on Wednesday review the antics of Neymar and Alvaro Gonzalez during Paris Saint-Germain's Ligue 1 clash with Marseille at the Parc des Princes on 13 September.

Neymar was shown a red card at the end of the game for slapping Gonzalez on the back of head. The Brazilian later accused Gonzalez of racial abuse. The Spaniard denies the claim and has been backed by his club Marseille.

PSG have also expressed support for their 222-million euro striker who has been accused of making homphobic comments towards Gonzalez and racist remarks to Marseille's Japanese defender Hiroki Sakai.

The Ligue de Football Professionnel's panel has called in lip readers and will also review video footage in an attempt to decide whether they can crack down on the bad behaviour.

Sanctions
Neymar, 28, has served a two match suspension for his red card. However he faces lengthy bans if he is found guilty of racist as well as homophobic remarks.

Gonzalez, 30, could receive a sanction of up to 10 games if he is deemed to have made a racist comment.

The 1-0 defeat condemned PSG to their second defeat of the season and was Marseille's first victory in the league over their bitter rivals in nine years.

Since then PSG have recovered some of their lustre and have won three consecutive games to rise to seventh in Ligue 1.

The champions are four points behind pacesetters Rennes while Marseille, after winning both their opening games, have lost one and drawn twice to slip to ninth.