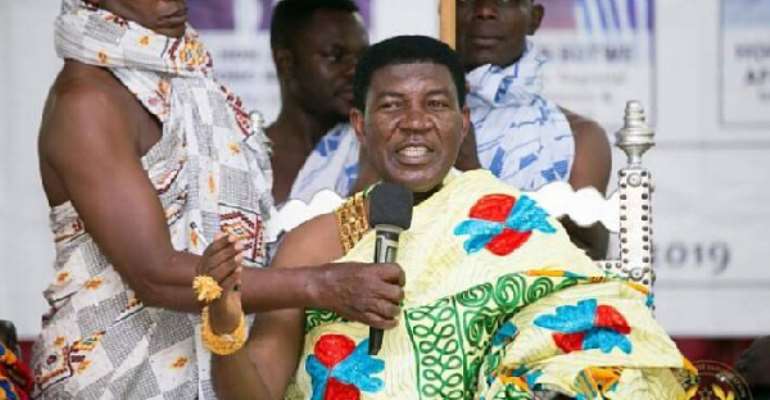 Techiman North District Chief Executive Hon. Peter Mensah has said that the Omanhene of the Techiman Traditional Council Oseadeeyo Akumfi Ameyaw IV deserves to be appointed as a Member of Council states following his track record and developmental agenda in line with the vision of the President Nana Addo Dankwa Akuffu Addo.

According to Hon Peter Mensah, Oseadeeyo Akumfi Ameyaw IV is one of the hardworking and visionary chiefs, it won’t be surprise if he is appointed by President Akufo-Addo to the council to advise the president," adding: “Our paramount chief deserves that appointment. His track record and accomplished banker and astute Lawyer speak volumes and he is worthy of administering wise counsel to Ghana’s number one gentleman."

The President Nana Addo Dankwa Akufo-Addo is set to trigger article 89 of the 1992 constitution for the six (6) newly created regions to be fully represented at the council of state level.

President Nana Akufo-Addo in his 2016 campaign message promised to establish factories in the various districts of the country and this has compelled him to plead with chiefs to give him land for its implementation, the Paramount Chief has, therefore, donation over 1,000 acres of lands for the project.

Oseadeɛyo Akumfi Ameyaw IV September 9, 2020, called on residents of the newly created Bono East Region to be thankful to President Nana Akuffo-Addo by renewing his mandate at the December polls.

Speaking at a ceremony when the President paid a courtesy call on him as part of his two-day working visit to the region, the Paramount chief said, the President initiative to divide the Brong Ahafo region into three showed that he is a listening leader.

“When I sent a delegation to you in Accra to tell you about our situation, you heeded to us and true to your word you made us a region on our own,” he said.

He then called on the people and the local government to have a team spirit to support President Akufo-Addo’s initiatives to bring growth to the area.

Although Nana Ameyaw IV acknowledged the developmental projects implemented by the Akufo-Addo government, he also appealed for more infrastructural development to the area.

Hon Peter Mensah noted that the level of leadership to ensuring and spearheading peace in the area as well as ceding more acreages of land to accommodate the government establishment after the creation of the Bono East region.

Oseadeeyo Akumfi Ameyaw IV called off the celebration of this year’s Apoo Festival which was scheduled to take place on 27th March – 12th April 2020 due to the coronavirus (COVID-19) pandemic.

The decision was considered after a meeting held between the Traditional Council and the Techiman Municipal Health Management Team to ensure the safety of residents.

The Festival is celebrated annually in Techiman Traditional Area, in the Bono-East Region of Ghana in the month of April, to serve as a ‘safe period’ for residents to come out openly to ‘reject’ things that they have harboured in their minds which they were not happy about, especially, the hidden wrongdoings of some people in authorities which no one dare talked about in the ancient days.

"Words cannot express our gratitude for your total commitment in ensuring unity, stability, and uniformity amongst the populace in the area. I wish to express our sincere appreciation and gratitude to you and the people of Techiman for rendering unflinching support for the government vision’’. Hon Peter Mensah revealed.

‘’Techimanhene deserves to be appointed as a Member of Council states, he will be a very good addition to the Council, he is a man of peace, knowledgeable and man of vision, I appeal to the His Excellency, President of the Republic, Nana Addo Dankwa Akuffu Addo to consider him, Mr. Peter Mensah told newsmen in Kumasi on Tuesday, September 29, 2020.