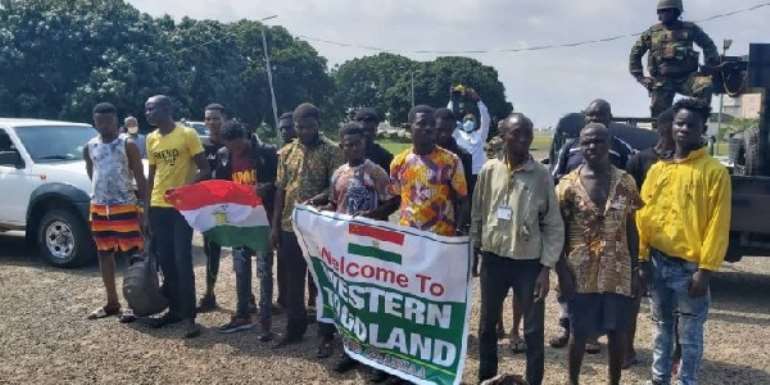 These are unusual times in our country's history. Times when those who profess to love Ghana yet dine with separatists and even fund their activities cannot pass for normal times.

Times when some chiefs' condemnation of the secessionist activities can only be taken with a pinch of salt are unusual and call for concerted actions by both the security agents and their civilian counterparts.

Like COVID-19, we would have to live with the new normal until we succeed in eliminating the canker of secessionism from our midst.

What makes the war against the separatists herculean is that those involved are within us, some of them holding traditional positions and others active in politics.

They have mastered the art of camouflage and deception even as they remain part of our everyday lives.

It is heartwarming and significant that the relevant agency has identified those funding the rebels and would deal with them as the law prescribes.

The state should not delay action unduly because allowing the rebels breathing space could be harmful to our national interest.

The world should not feel that our country is insecure for investment.

Politicians behind the secessionist bid are comfortable with the picture of instability which the nonsense could pose if not checked swiftly and with alacrity since after all the strides the country is making under the Akufo-Addo administration does not interest them. They would rather the economy suffered setbacks under a climate of instability.

These are times when the intelligence community should be on extra duty as it does cooperating with citizens, especially those living in the frontier communities should not be ignored.

The intelligence community should especially reach out to the public because the secessionists live in the suburbs in the border towns; their movements and activities known to residents of these areas.

We do not doubt the awesome powers of the state but would be quick to add that these are rarely used.

As we pointed out in an earlier commentary, the rebels depend on the manipulation of public opinion by the NDC to perpetrate their unpatriotic activities. After all, the NDC would cry out over a so-called infringement of the rights of individuals when suspected rebels are picked from their hideouts.

The state should be supported to deal and ruthlessly so, activities which threaten the territorial integrity of this country.

With new separatist groups bound by a common objective of breaking away from Ghana, decisive and effective actions should be in our quaver, ready to be pulled out and applied.

Under the circumstances, those who breach the law should suffer the consequences no matter their rank in society.

Papavi is still out of the reach of the security agencies, and it is worrying. Is there a silent decision to ignore him because of his age which is what we are beginning to think even as his operatives threaten the peace of this country?