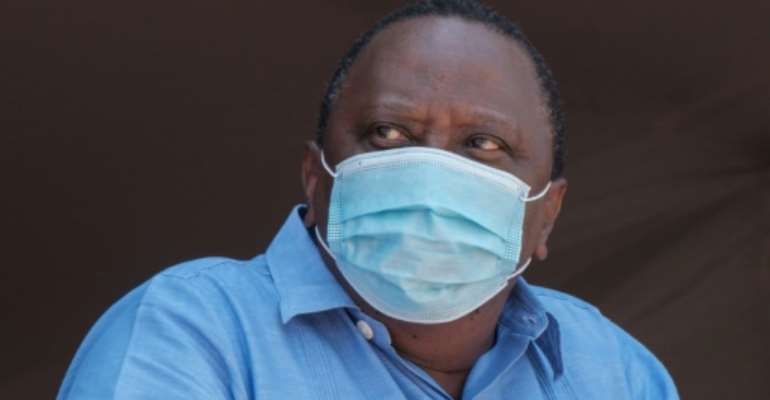 "We are the most vulnerable and fragile at the moment where we think we have won," Kenya's President Uhuru Kenyatta said. By Yasuyoshi CHIBA (AFP/File)

Kenyan President Uhuru Kenyatta on Monday allowed bars to reopen and restaurants to sell alcohol again as the rate of new coronavirus infections slowly declines in the East African nation.

In a nationwide address, Kenyatta announced the easing of several strict measures imposed to contain the spread of Covid-19, but stopped short of reopening classrooms after the 2020 school year was abandoned.

Following a coronavirus summit in Nairobi with government officials, the president ordered that a nationwide dusk-to-dawn curfew be extended by another 60 days, but pushed back the hour it begins from 9pm to 11pm.

The number of attendees allowed at weddings and funerals was doubled to 200, and the permitted size of gatherings at houses of worship increased to one third of their normal seated capacity.

"The prohibition against the operation of bars" and a separate ban on eateries selling alcohol would be lifted from Tuesday, but such venues must close by 10pm, Kenyatta said.

Bars were shut in March but soon began serving food to exploit a loophole allowing restaurants to serve drinks with meals.

In July, as new infections rose sharply, Kenyatta responded by banning the sale of alcohol in eateries too, noting an "aggressive surge" in cases among young people socialising in places offering a drink.

But the number of new daily infections has tapered off from a peak in July and early August, and Kenyan officials have cautiously suggested the country is turning the corner.

Kenya has reported 38,168 cases of Covid-19 and 700 deaths since announcing its first case in March, but Kenyatta warned a second wave was still very possible and threatened reimposing measures if cases rose again.

"We are the most vulnerable and fragile at the moment where we think we have won," Kenyatta said.

"If we have won one battle against Covid-19, we have not yet won the war."

Like many nations in East Africa, Kenya took swift action to combat the coronavirus, closing its borders on March 25 when it had only 25 cases, shutting schools and imposing a curfew while advising people to work from home.

Kenyatta said schools would not reopen until it was safe to do. The government has declared the school year lost and said classes would resume in 2021.

Six die in accident at Hemang after car crashed into wrongly...
38 minutes ago