Get The Video Tape From Net2 TV, Not YouTube — Lawyers Of Ken Agyapong As Court Plays Contempt Video 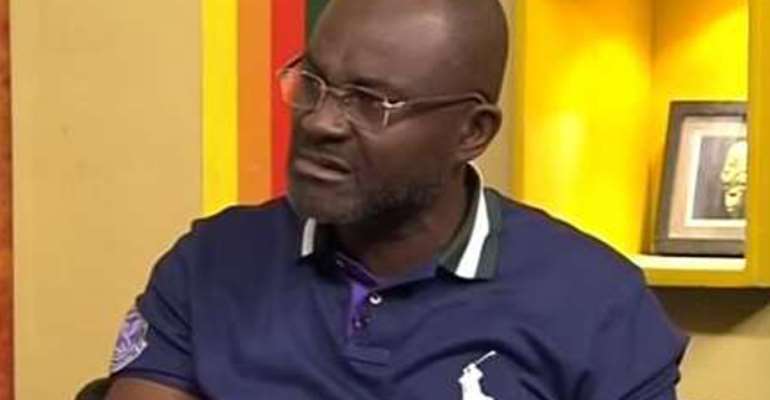 A video recording which is the subject of contempt proceedings initiated against the New Patriotic Party (NPP) Member of Parliament (MP) for Assin Central, Kennedy Ohene Agyapong, was yesterday played before an Accra High Court hearing the case.

The adoption and subsequent playing of the tape was not without controversy as lawyers for the respondent, led by Kwame Gyan, vehemently opposed the manner in which the said video tape was procured.

Mr. Agyapong was summoned to appear before the court to show cause why he should not be 'punished severely if found to be in contempt of court' following certain statements he allegedly made against a judge hearing a civil case brought against him and two others.

The tape which has been in the possession of the court was downloaded from a video-streaming website, YouTube and the defence lawyers were of the view that the court could not rely on such a tape in a committal proceeding which could curtail the freedom of their client.

Mr. Gyan argued that the said statement were allegedly made on 'Net2 TV' and 'Oman FM' and it would be appropriate to apply to these media houses for the true copies of the video and audio tape rather than resorting to what is on YouTube.

He said that under the Communication Act, the court would have to make a formal application to YouTube because they (YouTube) have a massive disclaimer regarding things that are floating on their platform.

“With the utmost respect, I don't think it is fair for me to subject my client to this process and my Lord, I am buttressed by the law, the Electronic Transaction Act 2008… I am at a loss as to whether we sitting here can vouch for the credibility of the information before the court since YouTube is not claiming responsibility. We can't vouch for the integrity of the information on YouTube because of the massive disclaimer I mentioned.”

Although the court, presided over by Justice Amos Wuntah Wuni, conceded that the information was not uploaded to the website by YouTube, he held that the information was put out there “in respect of statements made by the third defendant, Hon Kennedy Ohene Agyapong,” adding that being visual and audio, the third defendant (Mr. Agyapong) can be seen and heard by all reasonable persons; therefore, the video will be played in court.

The court subsequently went on to read the charge for which Mr. Agyapong was summoned to appear before the court.

The charge noted that the respondent on September 2, 2020 on a programme dubbed “The Seat” and aired on 'Net2 TV' and 'Oman FM' made reference to an interlocutory injunction granted by the court and made statements against the judge, to wit “you are stupid”, which was intended to lower the integrity of the court and also bring the court into disrepute.

Mr. Agyapong pleaded not guilty to the charge and the video was subsequently played to the hearing of the court.

Lawyer for Mr. Agyapong then raised issue with the fact that his client was not made aware or served with the charge but was made to plead to it in court.

Justice Wuni conceded that the charge as not served on the respondent and apologized for the mishap.

The court then adjourned the matter to September 28, 2020 for lawyers for Mr. Agyapong to study the tape and transcriptions so they can respond to it appropriately.

Meanwhile, the defence lawyers have filed a stay of proceedings and have also petitioned the Chief Justice, Justice Anin-Yeboah, over what they call unfair proceedings emanating from the trial court.

According to them, since Justice Wuni's authority to hear the matter is being challenged at the Supreme Court, it will be “bias and prejudicial” for him to be a judge in his own course in the exercise of such questionable jurisdiction.

The application for stay of proceedings is expected to be moved by the defence team on October 12, 2020.