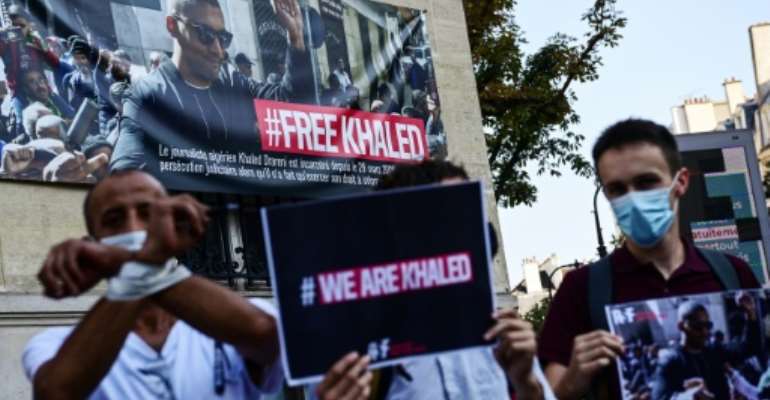 Protesters take part in an RSF-backed demonstration in support of jailed Algerian journalist Khaled Drareni on September 15 in Paris. By MARTIN BUREAU (AFP)

Algerian President Abdelmadjid Tebboune has accused press watchdog Reporters Without Borders (RSF) of working to "destabilise" the country with its campaign against the jailing of its Algiers correspondent Khaled Drareni.

Rights groups have "targeted" Algeria "to sap the stability of the country", he said in a meeting with local media representatives late Sunday.

"States do not attack us head-on but put non-governmental organisations in charge of the task," said the president, who singled out the France-based RSF for criticism.

The 40-year-old was convicted over his coverage of the mass protest movement that toppled Algeria's longtime president Abdelaziz Bouteflika last year.

He was found guilty of "inciting an unarmed gathering" and "endangering national unity", a ruling that drew condemnation at home and abroad.

Tebboune insisted that "nobody is incarcerated (in Algeria) for an article they have written".

"We forbid insults and attacks on issues related to state security," the successor to Bouteflika said, without elaborating.

Tebboune said Drareni, whose name he avoided using in the encounter, had been sentenced for his "involvement in an affair that has nothing to do with the press".

The journalist, according to Communications Minister Ammar Belhimer, had been working without a professional press card and was allegedly in the pay of "foreign embassies".

After the verdict, RSF head Christophe Deloire said: "We are outraged by the blind stubbornness of the Algerian judges who have just condemned (Drareni).

On Monday, around 150 people, including lawyers, opposition politicians and journalists, held their fifth weekly protest outside the Maison de la Presse, headquarters of most of the country's newspapers, to demand Drareni's release.

Some held pictures of other political detainees, including journalist Abdelkrim Zeghileche.

"The ruling against Khaled Drareni is a condemnation of the press," said his lawyer Mustapha Bouchachi.

Deloire, contacted by AFP on Monday, dismissed the president's charges against his organisation as "lies".

They "aim to cover up his difficulty in defending violations of press freedom that are absolutely obvious to millions of Algerians", he said.

"We operate in Algeria like we operate elsewhere, on the basis of principles that we defend everywhere, including France."

Algeria's President Abdelmajid Tebboune lays a wreath during a ceremony to lay to rest the remains of 24 resistance fighters, after their skulls were returned by Paris. By - (Algerian Presidency Press Office/AFP)

Tebboune had on Sunday welcomed a "positive" sign from Emmanuel Macron, president of Algeria's former colonial power France, despite the "complex" outstanding issues between their countries.

Macron and some of his advisers had shown "readiness and good faith" toward resolving issues dating back to the colonial period and Algeria's war of independence.

Algeria on July 5 buried the remains of 24 resistance fighters returned by Paris. The North African state has also called for the handover of colonial archives.